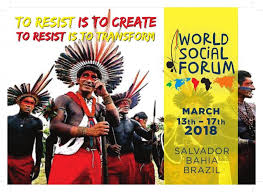 This was my conclusion, but it did not last for long, just the first days of the Forum. Today, I am not that sure anymore. Maybe we are stuck with the old apolitical forum and with a powerless International Council. What does this mean for the future?

Salvador de Bahia in Brazil is a wonderful city. A very diverse and cheerful population, many blacks and even more coloured people, a lot of music, a beautiful though dilapidated old town, the Pelourinho, a good climate and beautiful beaches.

This is where the World Social Forum took place, from March 13 to 17, 2018. When it started, I already had three interesting days of debates in the forum on health and social protection, say social justice. We concluded unanimously on the importance of universal social protection and about the need to look at as wide as possible social policies.

The World Social Forum started as usual with a big demonstration: tens of thousands of people walked through the city, happy faces, lots of hope, a great and very motivating mobilization. It gives you energy, enough to get through another year of activism.

You meet friends and you talk to Palestinians, Kurds, French, Germans, Finns, Moroccans, Tunisians, Sarawis, Cubans and so many more good people. You walk on clouds.

The real work started one day later. Wrestling through a programme of more than one hundred pages never is easy, certainly not on screen. Searching in a big university for the right faculty and the right room to find your workshop is not easy either. But the atmosphere is great, there is hope and confidence.

Doubts start to emerge with the second day. What is global about this forum? More than 80%, if not 90% of the participants are Brazilians. There are a lot of people from Latin America and even from Africa because the links between Salvador de Bahia and Africa are quite strong. The European presence is much weaker and Asia is almost completely absent. On the third day, it becomes clear that few workshops are political, beyond what is happening in Brazil. A very large majority of the more than 2000 activities are purely mobilizing, only a small minority is focused on the development of alternatives or on strategy. The major themes of the past, the international financial institutions, free trade, conflicts, climate change: you have to look for them with a magnifying glass.

A positive note should have come from the various parallel large gatherings: a women’s assembly, an assembly of democracies where Lula came to speak, an assembly of social resistance movements. Unfortunately, they were a bit disappointing. This WSF has certainly put feminism fully on the map, women played a huge role in this Forum, but their action program leaves much to be desired. The assembly with Lula was a moment of mobilization and, obviously, mainly Brazilian. The assembly of social movements was a failure, because of the active boycott of a few.

The international disappointment does not detract from the enormous success of this Forum for the Brazilians, in politically very difficult circumstances. Despite the active boycott of a few, the organizers have succeeded in creating a Forum with almost 80,000 participants. There certainly is no reason for any criticism.

However, questions have to be asked about the limited participation of Europe and Asia. The price of plane tickets explains something in times of austerity, but not everything. Many intellectuals have abandoned the Forum some time ago and this deserves at least a thorough analysis.

The meeting of the International Council was short: two half days. If you know the need of Brazilians to speak, often to say things that are not on the agenda, you can imagine the chaos of such a meeting. Three to five minutes of speaking time for everyone and no discussion. The old positions are repeated. And there is no solution.

’Another world is possible’, that was the mobilizing slogan when the first Forum was held in Porto Alegre in 2001. Thousands came to Brazil, intellectuals and grassroots movements from all over the world. The objective was to give an answer to the World Economic Forum in Davos, to develop global alternatives and strategies, to build global counterpower in times of neoliberal globalization.

To make this possible, a number of basic rules were laid down in a ’charter’, more particularly to avoid that the very fragmented left-wing groups would fight their ideological battle among themselves instead of with the common enemy.

Over time, this charter has come to work as a brake on political action. Nobody can speak ’on behalf of’ the Forum, fair enough, but does this mean that the Forum has no voice and never should have a voice? That the international Council can never ever take a political position? The founders of the Forum, who are still very present, are blocking everything, even on points on which there is a consensus, such as condemning the coup against President Dilma Roussef in Brazil, or the assassination of Marielle Franco last week in Rio de Janeiro. Understandably, this is met with incomprehension and a lot of frustration.

A second difficult topic is the so-called horizontality. Again, while we all agree on the necessity of avoiding vertical hierarchies and paralyzing structures, the attachment to horizontality has now become a cover for hiding the really existing power relations. There is no structure, no one has any responsibility and hence there is no accountability. There is no transparency, let alone democracy.

The same horizontality continues with the activities of the Forum. Rejecting every hierarchy means that a workshop on ’women and football’ or ’LGBT and hip-hop’ is just as important as a roundtable about the financial crisis or about war and peace. A proposal for a conference with prominent left-wing intellectuals is dismissed as ’listening to the gurus’. Alternatives and strategies are hardly discussed, ’the movements themselves must take care of that’, is the traditional answer.

Or in other words, the dog bites its own tail.

A lack of politics

These problems within the Forum are often attributed to a contradiction between NGOs and social movements. Nothing is less true. There are conservative movements and progressive, political NGOs. But there is a for outsiders invisible leadership, assisted by movements who are afraid of politics.

The key question, then, concerns the usefulness of such an apolitical forum? Certainly, for Brazil and even more for Salvador de Bahia this forum was very useful. But for all others? If the Forum cannot exist as a Forum, but only as a sum of thousands of movements, it becomes politically irrelevant. If the International Council does not exist as a political collective but again only as a gathering place for a few elected representatives of social movements, what is its role?

Is there no longer any need for a global response, for a global political actor, for a global strategy? In Europe as well, many movements are withdrawing at the national and even the local level, and there should be no doubt that local actions are important. Local utopias can be particularly interesting, but can they be enough? When they come at the expense of national, European and global actions, there is a real problem. Because neither climate change nor digital data protection, nor fiscal or social justice can be adequately tackled nationally, let alone locally.

’We are an open space, we create hope and have a different vision of politics’: this is the answer, time and again, to all questions, doubts and criticism. In reality there is no political approach and the objectives end with the mobilization. The most striking example is the ’success’ which is always referred to, when, in 2003, millions of people took to the streets against the war in Iraq. A few weeks later, exactly fifteen years ago, that war started. Where, then, is the success?

The articulation between different political levels is essential for any global and political meaning. The right knows this very well and acts accordingly. The left too often continues its navel gazing. At a time when the anger and the resistance to neoliberalism and dispossession are so great all over the world, it is worrying that there is nowhere any attempt to channel and activate them. Because in the meantime the repression and criminalization of social movements is increasing.

The old, apolitical World Social Forum has no future unless it can contribute to the coordination of actions and the organization of movements. It is by no means the only global forum, but the only one with a potential for transversal work. It would be a shame if this was lost. Next year the WSF is 18 years old, the age of political majority. Maybe also the age to become autonomous and disobedient?