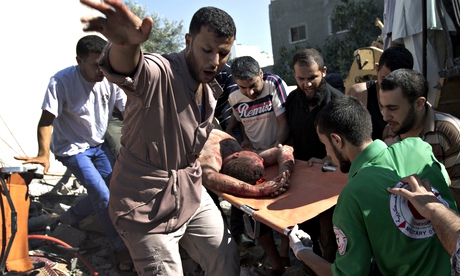 The World Must Intervene to Restrain the Israeli Army

The world watches but does nothing as yet another crisis unfolds. The tragedy of the disappearance and killing of three Israeli teenagers last month has provoked a campaign of collective punishment against Palestinian citizens across the occupied territories. Mass arrests have been carried out, whose victims include Palestinian parliamentarians. And revenge attacks have occurred, with Israeli settlers taking the law into their own hands.

In one such attack a Palestinian boy – Muhammad Abu Khdair – was kidnapped, and reportedly burned alive. Rocket attacks from Gaza that followed then allowed Israel to implement (and justify) what I believe was a pre-planned military operation. But let us be clear, this is not an attack on Hamas, nor a simple act of self-defence.

This is an attack on all Palestinians. Most of the victims have been civilians. Many of those who will die in the continuing air strikes, as well as in any ground action, will be ordinary people. And we know from past experience that a large number of those civilians will be children. In Israel’s last major attack on the Gaza Strip in 2008/9, 89 children were killed by the Israeli army’s own admission – and many other estimates put the total far higher.

We are seeing vivid and brutal examples of this again. Seven Palestinians, including two children, were killed and up to 25 wounded by Israeli bombs in the town of Khan Younis, in south Gaza, on Tuesday. At the time of writing, 17 civilians, including seven children, are dead. And not a single Israeli has been killed in the rocket attacks.

The last point, the asymmetry of the conflict, is perhaps the root of all of the violence. The fact remains that an illegal military occupation has been in place for 47 years. It is one that has transformed life for Palestinians into an oppressive system of apartheid. Without changing that, nothing else will change. Neither the Palestinians nor the Israelis will ever enjoy real peace or security.

The international community should intervene to restrain Israel’s army, which has called up 40,000 reserve soldiers. World leaders must stop the escalation to protect the Palestinian people and prevent further slaughter, the like of which we have witnessed this week.

We demand an immediate meeting of the UN security council and a decision to impose a complete ceasefire with effective international protection for the Palestinian people, who have no way of matching the superpower of the mighty Israeli army. We call on the Palestinian leadership to stop its hesitation in establishing a unified Palestinian leadership and go straight to the international criminal court to hold Israel accountable. Without these measures, I fear worse may be to come.