Home > English > NEWS AND ANALYSIS > The Urgency to Struggle Against the Rise of Nuclear Weapons and the (...) 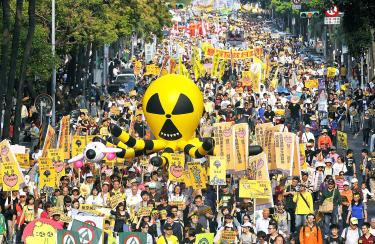 This is the second article in the series of four, the first was published in the December 2019 issue of the AIJ.

The implosion of the Soviet Union took the world by surprise but it also gave us a sense of hope for the future. The end of Stalinist regimes ushered in a new beginning of reflection on socialism for the 21st century. The struggles and wars of the 20th century would give way to a new sense of engagement for peace by the peoples of the major countries of our world. Of course this idea still remains utopic as long as capitalism and imperialism crisscross our planet. Nevertheless as the expression goes, “hope springs eternal” showed us that we should find solace in the objective fact that the peoples of this world are not necessarily supporters of war and exploitation.

Led by this new sense of hope, we must nevertheless recognize, that we have entered a new era, where the imperial powers of our world are now engaged in a confrontational struggle for a new world order. The theory of world systems as developed by the late Emanuel Wallerstein has led to a breakthrough in understanding the calamities of our world dominated by chaos, rivalries and confrontation.

This chaotic rivalry and confrontation has demonstrated to the world, that the issue of Nuclear weapons and the subsequent militarization of our planet has become, along with climate change, another fundamental threat to human existence. The Cold War, that disappeared with the end of the Soviet Union nevertheless implanted in the military arsenal of capitalism and imperialism, the need for nuclear weapons in order to dominate the planet. Nuclear weapons have become since World War II a mainstay of military strategy, which most advanced industrial nations of our world seek to attain. Today we are in a new era marked by the return and also the rise of Nuclear weapons with new technology of Hypersonic missiles, armed nuclear satellites and a Space Force. Even traditional conventional weapons have become nuclear.

But this is not a new problem, only one that has reappeared within a new context of the struggle for a new world order. During the period of the Cold War, the United States and the Soviet Union, the two superpowers who controlled lesser powers around the world, created a controlled parameter to govern and control the expansion of nuclear weapons. For 50 years nuclear arms control was the central element of the relationship between the United States and the Soviet Union. Treaties such as SALT I and SALT II, INF Treaty (Intermediate-Range Nuclear Forces) and many others, forced the two superpowers to deactivate some 40,000 nuclear warheads. These treaties among many were the parameters, which under international supervision such as the UN Commission of Nuclear Weapons and Disarmament, led to what was called “Peaceful Co-Existence”.

The situation today, as previously alluded to remains just as dangerous and some will say even more dangerous. The United States and Russia have about 13,800 nuclear weapons at their disposal, which constitutes 95% of all existing nuclear weapons. Both nuclear powers are also modernizing their nuclear forces under the term given “nuclear triad” which means land, sea and air. These new developments are not independent of other nuclear weapon owners such as China, India, Pakistan and of course North Korea, to name but a few.

There are other alarming developments that have put into question whether any new nuclear treaty will be put in place or that the existing nuclear treaties, that gave the world a certain security will be renewed. The two major developments are those around the INF Treaty (1987) and the New START Treaty (2011). These two major treaties signed after the end of the Cold War are in an acute danger of not being renewed. The New START Treaty (2011) is the only treaty that today keeps in tact a verification system between the two nuclear powers, the United States and Russia. It was still in effect in 2018, but no talks were scheduled in 2019 and we are now in 2020, which is a Presidential year in the United States.

The dismantling of the different nuclear weapons treaty had already begun under the George W.Bush (2001-2009) administration. The erosion of past agreements began with the termination of the 1972 Anti-Ballistic Missile Treaty by the United States. In 2002 Russia withdrew from START II agreement. After 31 years of existence the Trump administration withdrew from the INF Treaty on the 2nd of August 2019. President Putin followed suit one day later. Meanwhile China had introduced a new medium-range delivery system in 2018.

This modest summary of the precarious world situation with regards to nuclear arms and militarization of the planet, demonstrates quite clearly that the rise of a nuclear arms race is another element also part of the equation that would lead to the destruction of our planet, are only home. This also tells us that there are key challenges ahead. The Trump administration has budgeted 490 billion dollars over 10 years according to the Congressional Budget Office (CBO) to modernize and enhance United States nuclear arsenal, claiming that the United States lags behind Russia in nuclear weapons for the 21st century.

Therefore achieving a strategic balance as we have seen in the 1980’s and 1990’s has become more complex in view of the new military developments such as conventional precision vehicles, successful space reconnaissance and submarine strategic combat. (Holmes, 2016). Nevertheless the major impediment in nuclear arms control in the second decade of the 21st century remains the lack of political will on the part of the imperialist powers, who still believe nuclear weapons are a necessity to develop the capitalist system and the hegemony that comes with it. In other words it remains, as always, a question of capitalist power in controlling the planet.

It has become very clear then that because of the rivalry to create a new world order for the 21st century, this has led to a rivalry for the need of nuclear weapons, that are more sophisticated, more destructive and put in danger our survival. In the early 1950’s, at the beginning of the nuclear age, workers (men and women), artists, intellectuals, students banded together to struggle to abolish and destroy nuclear weapons that threatened our existence.

This period of the past has returned. We are back to the future. Nuclear weapons have become once again the fetishes of the imperial powers. Once again as in the past the peoples of the world, have to take up the torch raised by the anti-nuclear activists of the 1950’s and return to the struggle.

Our governments are the targets, which we know defend the interests of the capitalists and imperialist despite their nice discourses. The window of opportunity for fundamental change is at hand. Therefore we cannot let this slip between our fingers. Our fingers have to join together to form the fist of struggle, the fist of solidarity and the fist of fundamental change that is needed for a better society.

All equilateral triangles have three equal sides. The third side that we will dwell upon in the third article, a democracy that is in peril, is just has important and will form in my humble opinion the complete triangule of an equal struggle that we face in the 21st century.

The spirit that led to the Paris Commune in 1871 and Seattle in 1999, 20 years ago this year, must survive and lead and encourage our struggle.