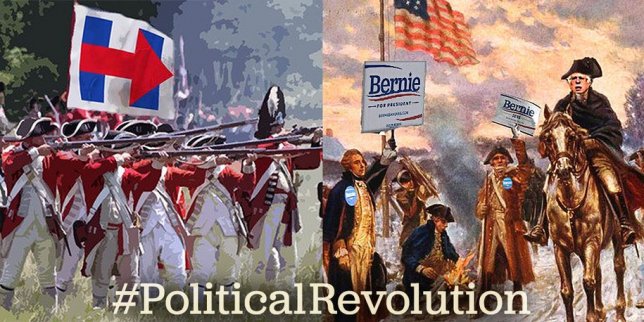 The Prairie Fire Has Two Fronts: the Sanders Superdelegate Strategy

After having won the Democratic primary in Wisconsin, Bernie Sanders has unprecedented momentum in a winning streak involving massive margins in seven out of the last eight states that voted (most notably in Washington State). This has exponentially increased his chances of winning in New York, the state he was born and brought up in.

A New York victory (he is down in the polls by 12 points) would be crucial in turning the tide in states such as Pennsylvania (down by 6 points), Maryland (down by 15 points), New Jersey (down by 18 points), Oregon (where he is already leading), and California (where he hopes to overtake Secretary Clinton in pledged delegates, he is down by 6 points).

Over the past few weeks, it has become clear that the Sanders campaign has shifted track to win the most number of pledged delegates, rather than total delegates. The change in perspective comes from the increasing attacks by the corporate media and the Democratic establishment, as well as the rigging of the primary process over the election season.

Sanders hopes to sway a chunk of superdelegates onto his side by amassing a lead in the pledged delegates – the ones elected through the primary and caucus votes – and then to make a case in the name of democracy, popular will, and electability. Implicit in this is also an admission that Hillary Clinton probably will reach the magic number of 2383 delegates required for her nomination with the superdelegates who have earlier endorsed her. However, the superdelegate vote isn’t cast until the convention, after the pledged delegate results by state are tallied.

Clinton at this point has 1280 pledged delegates, and Sanders has 1030, giving the former a lead of 250. Further, after the full Washington state caucus convention results come in, as well as the state level caucus of Nevada (where Sanders overturned the delegate lead Clinton had at the local level) – and additional delegates are allocated -we can expect Clinton’s lead to shrink to 200-210.

Though the convention is still some way off - and the race won’t be over till California (one of the last states) votes – there already is in place a coherent and comprehensive discourse by the Sanders campaign surrogates and staff on their superdelegate strategy.

1. Had Sanders, like any other ordinary Democrat who could have run, had his fair or proportionate share of superdelegate endorsements in line with his primary victories and progressive message, as would have been natural in any primary year other than this (with the Clinton stranglehold over the party and the Sanders threat to corporate donors) – the race in pledged as well as total delegates would have been much tighter. Flip the superdelegates between the two and Sanders becomes the frontrunner, it has been pointed out in USA Today. In 2008, the superdelegate lead was exactly how Hillary Clinton maintained her frontrunner status for most of the race.

2. California and New York are the most liberal as well as the most populous states in the country, and have never played a decisive role in the Democratic primary process before, so any increase in turnout cannot benefit the frontrunner. The chances of themore liberal candidate winning in these states this time is greater than ever before. In addition, New York has seen an unprecedented increase in voter registration, and California allows Independents to vote in the Democratic primary but not the Republican one.

3. Most of the superdelegates were pledged to Clinton before Sanders had even entered the race – including many progressives. It is worth mentioning that most of the members of the 71 member-strong Democratic progressive caucus was also pledged before Sanders’ entry.

4. Hundreds of superdelegates are still unpledged. They number over 200.

5. Hundreds of superdelegates are in states where Sanders has won resounding or even overwhelming victories.

6. Sanders polls better against Trump (20 points on average), or any Republican (14 points against Cruz, 10 points against Kasich), winning by landslides margins in head-to-head matchups in every poll. Hillary Clinton on the other hand is neck-and-neck with Trump in half the matchups, and beats him by half the margin Sanders does in the remaining. She loses to Cruz in half the matchups and scrapes victory in the rest. Most polls show her losing to John Kasich.

7. Another point to know is that Sanders performs better in swing states as a whole than Clinton, in either primary victories over Clinton, or head-to-head matchups with Republicans in those states even if he lost the primary races there.

9. Other than Ohio and South Carolina, Sanders has won or drawn in every state where he got the chance to spend time on the ground. This has enormous potential in the general election.

10. The Republican convention, to be held in Cleveland, Ohio, is two weeks before Democratic convention in Philadelphia. The Democrats would already know who the Republican nominee is by the time their primary process wraps up – if Sanders stays competitive.

11. Sanders would win California by a landslide in the general, as well as New York in a similar fashion, especially if Cruz is the nominee.

12. The labour rank-and-file will genuinely come out and canvas for Sanders if he gets the nomination. None of the labour or progressive group endorsements Hillary Clinton has received involved gauging the popular will of their members.

13. The turnout Sanders can inspire would help Democrats down the ticket. His rallies have consistently been the largest rallies this election cycle, for both parties. These included 25,000 in LA, 13,000 in Tuscon, Arizona, 27,000 in Portland, Oregon, 25,000 in Seattle, 18,000 in the Bronx, New York and other mammoth rallies, including in Southern red states. What the mainstream media doesn’t tell you is that the largest rally Clinton has held, has had an attendance of 4,500. It is impossible to envision a candidate with such little enthusiasm taking on Trump or Cruz, both of which have a good amount of popular support. Lower turnouts will damage the chances of Democrats contesting for Congress this year. In addition, Sanders’ grassroots fundraising potential could be harnessed to aid hundred of Democratic candidates, even in unlikely areas, if Sanders were the nominee. Like he has asserted several times, democrats win when the turnout is high, the Republican win when turnout is low.

14. The success of his insurgent campaign (as well as Trump’s) has also ably demonstrated that voters are unwilling to be spoonfed another Clinton or Bush who would continue politics as usual, ultimately aggravating the multiple issues affecting the country (such as income inequality, infrastructure obsolescence, racism, unemployment, student debt, climate change – the gluttony of the pharma and insurance companies and the fraud of Wall Street).

15. Another point to note would be the party-affiliation map. Independents constitute 42% of electorate, while the Republicans are 27% of the total. With the sort of lead with Independents Sanders has, he wouldn’t need the support of more than 40% of Democrats to win the general election in a two-way race against a Republican and would need only 20% of the Democratic vote in a three-way race. He has a historical affinity for taking away Republican votes, especially in rural and working class areas. He garners 25% of the Republican votes in Vermont, his margins of victory swell with increasing turnouts every time.

16. Millenials form the largest voting chunk in the American electorate as a demographic. Sanders has till now received more votes from millenial votes than Trump and Hillary put together, regardless of ethnicity. Progressivism is the future of the Democratic party, and it is imperative for the DNC to recognize that.

17. A lot of Independents will vote Trump if Sanders is denied the nomination, according to most polling. Hillary and Trump fare poorly among Independents, who overwhelmingly back Sanders by minimum 70-30 in each poll.

18. A lot of Democrats, Independents, Republicans and never voteds - atleast 33% of Sanders supporters if not counting the eligible voters who can crossvote in the generals (republicans and independents outside the closed primary system) -absolutely refuse to vote for Clinton. This resentment has been aggravated by the rampant rigging of the primary process by the DNC, the united effort of the Democratic establishment at suppressing and dismissing Sanders and the wholesale media blackout and manufactured reporting on Sanders.

19. Sanders has no FBI investigation on him, was involved in no scandals, and has the highest favorability ratings as a Senator as well as among any Presidential candidate. He is polled as the most honest and trustworthy candidate consistently. Hillary Clinton, on the other hand, has an interview with the FBI, numerous conflicts of interests, her husband has companies in the Cayman Islands, her campaign manager John Podesta has ownership of firms involved in Panama. It is worth noting that no candidate in history has ever run despite an FBI investigation on them, nor has any First Lady ever been investigated by the agency, other than Hillary Clinton. No candidate with such low honesty-and-trustworthiness scores in the negative has ever won the Presidency. If not for the tight grip the Clintons have on the party organization, the DNC would have acknowledged that Hillary Clinton other than her corporate fundraising behemoth and name-recognition, is one of the weakest candidates they could field in a general election.

20. Sanders is also the more likely to keep the entire party in the loop, once in the White House. The narrow cliques and rampant nepotism of the Clintons has historically been the stuff of gossip and scandal.

For this to work, Sanders would require that every delegate and superdelegate be aware of how rigged the primary was against him and will fairly judge his performance and potential in the general election: swing states, and his performances where he won by 50% margins despite having the entire media and democratic establishment either opposing him or blacking his campaign out.

However, the case can also be made that there are very few elected officials among the Democrats who do not owe a personal loyalty to the Clintons, either in return for political help, or fundraising help or funds from the Clinton Foundation.

Another barrier to Sanders would be a tacit consensus among the Democratic party - officeholders being overwhelmingly from the corporate wing - that it would be better to risk losing in the general election rather than move left. Defying Wall Street has for years not been a priority for the Democrats.

Another strategy has been suggested by Sanders campaign manager Jeff Weaver - deny Hillary the magic number of 2383 pledged delegates while agitating against the superdelegate system - to take matters to an open convention. Sanders’ clear popularity and the enthusiasm generated by his campaign will prevent the super delegates from intervening. The Sanders camp appears confident on the question of amassing the required support in an activist-dominated contested convention.In addition, it is also a way to reset the primary race, pressure the delegates to make better-informed decisions, and send their message across on a more even footing than has been allowed by the party.