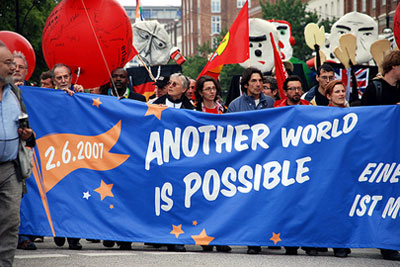 In life, everything has a cycle. A beginning, a middle, and an end. And what a beginning it was for the World Social Forum (WSF). The year was 2001, the emblematic success of the 1999 Seattle protests against the World Trade Organization (WTO) inspired so many, not only because they shut down the Seattle WTO Ministerial, but because they showed and exemplified what a united front across sectors from students to labor to women to trade justice to people of color and too many others to do justice in a short piece could achieve. There were also protests in Prague and elsewhere; it was the coming out year of the anti-globalization movement.

This was the collective, global momentum with which the WSF was born. The idea inclusive, the target the World Economic Forum, and the goal to strengthen the movements and achieve victories. The 2003 global march against the war on Iraq was the proud achievement of the WSF: as media cited, “6 million to 11 million people turned out in at least 650 cities around the world in the anti-war protests.”

This energy of the WSF, however, did not forge on. Instead, it faltered. Some would blame a bureaucracy that had formed; some would question the true participatory nature of the WSF with rising costs for movements who did not have millions of dollars at their disposal. The dates were changed: Was the World Economic Forum no longer the target?

Most importantly, the WSF had gotten itself trapped in a quagmire. Were we there to achieve consensus and agree on a goal, concentrating all of our collective efforts in reaching it? Just like the 2003 march against the war on Iraq. Could we agree, for example, to all work on derailing the WTO? Or maybe the Amazon was the priority, so on, so forth. However, some argued that the WSF was a space. A space to discuss, debate, and share ideas and struggles. This was the beginning of the slow demise of the once great WSF.

As stated earlier, everything has a cycle. Hubris, though, is a dangerous quality to have, and in this case, as in many other cases, because of pride in former glory, many simply cannot let go. So instead, the slow decay, ugly divisions and deterioration of the WSF took place in excruciatingly painful fashion, with a global audience watching.

This is not unique to the WSF. We humans tend to get attached to things and spaces that we had achieved and often extend their existence beyond their intended lifespan or goal. This has been the case of many campaigns, networks, movements, and alliances that played a very important role in their particular moment and context, but that today drag their existence on without significant relevance.

There is no fault in being proud of making possible something great, innovative, and inspiring. But there is only foolishness in refusing to let go of that dying creation, out of touch with many issues 18 years later. To rephrase Gramsci, the crisis lies precisely in the fact that with the dying refusing to die, the new will never be given the space or opportunity to be born.

The WSF International Council needs to acknowledge that they have fully run their cycle and that instead of dragging this process on, using precious time, energy and resources, they should take pride in what has been achieved and now give it the dignified death that it deserves. The WSF will not be forgotten; in fact, it shall become a reference for years to come.

Already, upon deep reflection, we have learned a number of valuable lessons from the WSF that we can take and use to strengthen whatever new form is born:

1) Social movements / the anti-globalization movement were able to stop in different ways the advance of neoliberalism, and even gave birth to different types of progressive governments that had some achievements but failed to build structural alternatives to neoliberalism, not to say capitalism, anthropocentrism, and patriarchy.

2) We are in the middle of a systemic crisis that is much deeper than what we thought we were in, when the first WSF took place in 2001. This systemic crisis embraces us too, the political parties of the left, the social organizations, the activists, the intellectuals; we need to think deeply about our mistakes by action or omission. We need to get out of the justification that everything is the fault of imperialism, the right, and the neoliberal forces. We are also part of the problem.

Yes, many will argue that there are new movements, students, young people of color, and many others, who had never even had a chance to go to a WSF. But with dying properly put to rest, a great many flowers of ideas and innovations shall sprout up everywhere. We must not underestimate the power of imagination, invention, and, most powerful of all, the pair of resistance and hope.

Another world is possible is not just a rallying cry; it is a goal we are all actively working towards, in our diverse ways. This will not die with the WSF; it will live on, until we achieve it. The arc of justice will bend our way, if we bend it together, in all our strength in diversity and solidarity.

The WSF has achieved so much and inspired and will continue to inspire generations to come. So, this is not to disparage nor say let us forget about the WSF. No, this is about respecting nature’s life cycles and how great the WSF may have been at its peak, it has now come to its end. But this is not a sad moment. We should celebrate, cherish, give honor, and bid farewell as we give the WSF the dignified farewell it deserves.

Mary Louise Malig is a trade analyst and activist who has followed issues of the WTO and other free trade agreements for more than 20 years. Malig also co-organized and participated in trade and economic justice assemblies, amongst other issues, at the WSF since 2002.

Pablo Solón is an activist and researcher that advocates for a systemic change that challenges capitalism, productivism, extractivism, anthropocentrism, patriarchy, and plutocracy. Solón was part of the WSF International Committee for a few years.