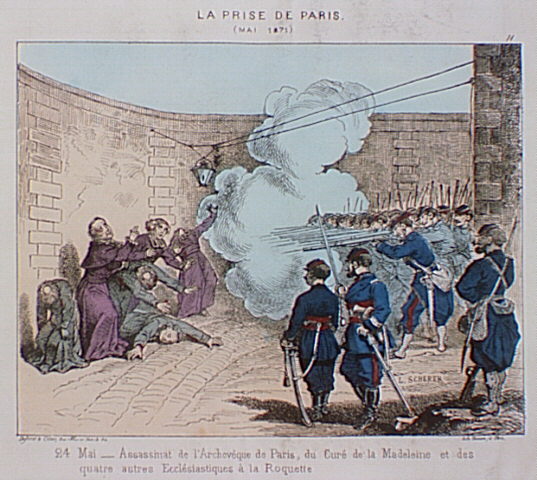 Saturday 1 May 2021, by Donald Cuccioletta

The French Revolution of 1789 opened up a period of French history that led to the first socialist government, The Paris Commune 1871. The French Revolution of 1789 ushered in an attempt, sometimes successful sometime not, to create a form of republican democracy. The overthrow of the French aristocracy gave way to a structure of democracy held by the merchant class of the period. It also signaled the beginning of modernity. A fundamental change happened, with its weaknesses, but that nevertheless instituted a new political consciousness that throughout the subsequent years would ultimately produce a surge for social and political change. The next 82 years of French history would open up a period of class struggle, never before seen with the advent of Communist ideals within the French working class.

In 1804, 15 years after the French Revolution, Napoleon Bonaparte was named Emperor of France. In 1809 the Empire was proclaimed and proceeded through multiple wars throughout Europe to expand and impose the ideals of the French Republic. With the successes of Napoleon Bonaparte, the French people supported a plan of expansionism supposedly based on republican ideals. With the help of the return of certain aristocratic ideals, Bonaparte was able to impose a regime of oppression and authoritarianism that led to a period of poverty never before seen prior to the Revolution of 1789. This of course led to a return of a demand for democracy and freedom as seen during 1789. This led to the ultimate fall of the Empire and a return to aristocratic rule under the King Louis Philippe.

The conditions of the working class and peasantry had deteriorated across Europe. The Republican ideals had not been successful in penetrating Europe. On the contrary with the end of the French Empire, the aristocracy across Europe including France imposed disastrous conditions for all peoples. Revolt was in the air. Revolution spread across the continent. The 1848 revolutions named the “people’s spring” spread across Europe. This had never been seen throughout the continent and the world. France, because of its revolutionary history had become the center of these revolutions. The working class and peasantry supported by small businesses demanded freedom of the press, democratic reform and the end of the monarchy.

In the same year, Karl Marx published The Communist Manifesto which for the first time addressed the conditions of the working class and proposed the need for a Communist Party and revolution based on the now famous phrase, “Workers of the world unite you have nothing to lose but your chains”. This call for class struggle spread across Europe and bolstered the fight for workers emancipation. By 1864 The International Workingmen’s Association (IWA) was formed in St Mary’s Meeting Hall in London, England in the presence of Karl Marx and Michael Bakunine.

At its height the IWA, later known as the First International, had 8 million members. For the first time in working class history an international organization was born to respond organizationally to the call for revolution by the Communist Manifesto and the 1848 revolutions across Europe. All this would eventually fuel the communards of the Paris Commune of 1871 and create the basis to take up the red banner of class struggle and socialism.

The Franco-Prussian war of 1870 set the stage for the upsurge of the citizens of Paris. The army of Versailles under the government of Adolphe Thiers who was Chief of the Executive branch before being named President in 1871, was totally inept to face the Prussian army. As early as 1867 the people of Paris had sensed the ineptitude of the government. Radical weeklies such as La Rue (The Street), cooperative restaurants such as La Marmite and dailies such as Le Peuple (The People) flourished. By 1869 The Federal Association of Workers was formed. In the middle of the Franco-Prussian War, the Proclamation of the Republic was ushered in at the City Hall of Paris and a government of National defense was formed, as the Versaillais army collapsed and the Prussian Army seized Paris.

The Paris Commune 1871 is born

In January of 1871, 20 boroughs of Paris were united under a Central Committee, with a slogan stating “Place à la Commune”. The Paris Commune of 1871 lasted 72 days, from March 18th, 1871 to May 28th, 1871. Till this day thousands and even 10’s of thousands of people gather during this period of 72 days at a wall, known as “Le Mur des Fédérés” (The Wall of the Federates” at the Père Lachaise cemetery in Paris where the last of the Communards where shot by the Army of Versaillais. People gather from all over the world to pay homage to the Communards (10,000 were shot and killed by the Prussians and the Army of Versaillais) as they sing the song that was sung by the Communards, “Le Temps des Cerises” which became the anthem of the Paris Commune.

This commemoration of the Paris Commune, is celebrated by thousands who go every year to Père Lachaise, the millions across the world who pay homage to the Communards who gave us the first example of how working class solidarity can be transformed into class struggle, revolution and the experience of people’s power for the people. Walter Benjamin in his ‘Concept of History’ written in 1940, refers to the role of history that can galvanize certain events that transcend the normal course of capitalist history. Such an event was the Paris Commune 1871. It showed the world of the 19th century that communities of oppressed people could rise up and produce periods of emancipation. And the memory of this struggle continued to guide working class struggles into the 20th and even today into the 21st century.

The Paris Commune as stated by Michael Löwry, was the “the first great attempt of proletarian power in modern history”. This also energized great revolutionaries such has Karl Marx, Michael Bakunin and later on the leaders of the Russian Revolution, V.I. Lenin and Leon Trotsky. It forged a pluralist unity among Socialists, Marxists, Communists and Anarchists, supported by a National Guard (the people’s army, where the soldiers voted for their officers by an open vote), armed with canons, to build barricades throughout the 20 boroughs in Paris, which faced the onslaughts of the army of Versailles with the aid of the Prussians. Women and men, shoe makers, bakers, artisans, small shop owners, artists, journalists, organic intellectuals and organic revolutionaries who built, as Antonio Gramsci would later write in his “Letters from Prison”, the hegemonic power of the working class.

Lessons to be learned from this first organized revolution are many

The role of women, young and old alike, were prominent in the Paris Commune. They formed various women’s committee, such as the Union of Women recognized by the Commune, who took democratic positions regarding women’s rights, the role of women in the society of the Commune and how women should develop their own strategy in the fight according to the needs of women. Women were central in the social and political history of the Commune. They formed committees of vigilance to keep track of the movements of the army of Versailles. Louise Michel has been frequently mentioned as one of the prominent leaders of the women’s brigade. However, there were hundreds of women, such as Elizabeth Dmitrieff, who were leaders in the Commune besides the thousands who fought and died in battle. This had never been seen before and even in many subsequent revolutions women never reached the levels of leadership as seen by the women of the Commune.

Beyond all the exploits of the Commune that has left us a class struggle heritage, the important element that has educated us is how the Commune understood that how the role of the state had to not only change but had to be abolished and recreated by new governing instruments which did not exclude the people. Debating revolutionary clubs flourished, focusing on the concept of emancipations for all of the working class, within a new framework of governance. To confront the archaic structures of the state and to construct new forms of political sovereignty became the guiding principle of the Commune. What does democracy truly mean in a revolutionary period? Reflection on what was most important such as movements of the people and how do they function in the process of governance? All this had set the stage for further revolutions to discuss the fundamental structures that are needed to govern with the inclusion of the people who fought for the revolution.

These questions still exist today. Socialism is still prominent for the outcome of a revolution. The Commune has demonstrated this quite clearly. But today and here we have to take the lead of the Commune and the Communards in asking what type of socialism are we talking about and how should we practice it. One important lesson that has survived the Commune is how to integrate cities in the revolutionary cause.

Cities are the New Centers of Revolution?

This idea, which has emerged today under the label of Radical Municipalism, is well explained in the revolutionary work of Henri Lefebvre, who in the middle of the revolt in Paris of 1968 (some have called it the second Paris Commune) authored a book entitled “Take the City”. David Harvey in his path breaking book, ‘Rebel Cities’ , showed how cities have become, with the development of capitalism, centers of banking, finance, land and housing speculation etc, in other words the new center of capitalist exploitation.

In other words the city and all cities belong to the working people who work and live in those cities. The Paris Commune was the beginning of this idea. The Paris Commune began this process. The Communard showed us the importance of cities in overthrowing the capitalist class.