Home > English > NEWS AND ANALYSIS > The Neoliberal Miracle Under Fire 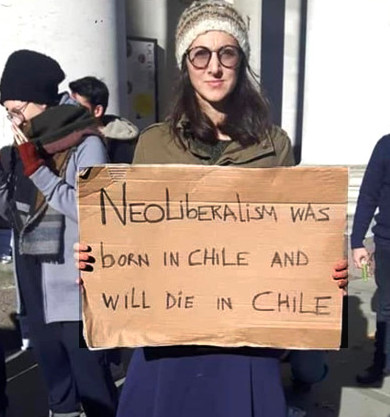 The Neoliberal Miracle Under Fire

Unexpected turmoil erupted in Chile on October 18th, when high school students mobilized against a subway fare increase. On October 25th, another two million Chileans joined them in opposition to the impacts of neoliberalism in every aspect of life. They are in revolt against political, social and economic abuses stemming from the commodification of education, health, and retirement pensions.

The international media has published impressive images of the recent events, illustrating the result of years of accrued anger that began with the military dictatorship in 1973 when neoliberal economists, known as the Chicago Boys, used Pinochet’s Chile as a testing ground for their theories on the withdrawal of the state from economic activity. The state’s resources were transferred into private hands to enhance the free market and to further the privatization of common goods and social programs. Neoliberalism put an end to any tenuous forms of social cohesion in Chile.

The current state of social injustice and the profound gap between rich and poor are a shameful platform on which the OECD country continues to expand. Chile ranks as one of the most unequal countries among a group of thirty of the world’s wealthiest nations. Another way to evaluate inequality is by examining the incomes of the richest and poorest citizens. In 2006, the richest 20 per cent earned 10 times more than the poorest 20 per cent, according to a government survey, while the average monthly salary was the equivalent of $750 CAD.

Protesting to Change the Government

The current protests are not just concerned with changing the government; they intend to change everything. Things have been getting progressively worse for decades, and people worry about the future and their children’s wellbeing. Almost everything is privatized in Chile – it is neoliberalism at large, and the slogan “neoliberalism started in Chile and should die here” has swept across the nation-wide demonstrations.

Neoliberal reforms implemented during the dictatorship and continued after the transition to democracy took the form of abuses by the elites against the majority of the working poor, and the years of exclusion and humiliation are taking their toll. People are fed up with seeing the new rich pillage the country’s wealth. They do it in the name of a development system that has enabled the ruling elites to marginalize the poverty and debt of millions of Chileans for their exclusive benefit. This ‘shock doctrine’ was implemented under a brutal authoritarian regime thirty years in the making through the assassination, torture, violation, and exile of its opponents. The policy of war applied against the left and popular organizations achieved its goals for many years but now faces the rebellion of the new generations and the ghosts of those defeated in 1973 but who never truly stopped fighting.

All the Power to the Elites

Paraphrasing Pinochet while nodding to von Clausewitz, Chilean President Sebastian Piñera declared on October 20th that “Chile is at war against a powerful enemy,” thereby prolonging the political crisis into one of warlike confrontation. Piñera then declared a state of emergency and curfew and called on the military to guard private property. The Chilean Armed Forces were founded to protect the dominant system against any popular social forces which might emerge from abuse and structural injustice and has provided the pretext for the murder, torture, and violation of unarmed civilians, men, and women. The only war that Chileans remember is when the armed forces attack peaceful protesters who demand that their rights be respected. Currently, as in the past, the armed forces shoot those who paid for the bullets with their taxes and their labour.

But nothing should astonish us anymore. The history of Chile has shown that when the Right is unable to maintain social hegemony, it exercises domination through state repression. To do this, the government resorts to a fictitious internal enemy or international conspiracy. After 1973, neoliberals reduced the social role of the state and expanded the police services, effectively criminalizing dissent through repression. All other public sector functions were privatized. Neoliberalism continued, regardless of the government in power, because during the military dictatorship the right wing enacted an authoritarian constitution that would control society from above. This constitution is undemocratic both because of the context in which it was created and because of its contents. It restricts popular sovereignty, focusing instead on private property and market freedom against the common good and societal well-being.

Nevertheless, the social rebellion that emerged to challenge to neoliberal democracy and its political institutions is calling on us to build a new collective vision that invites us to rethink and reinvent the geographical territory we inhabit. We no longer know who the country belongs to or where it is heading, but we are not willing to give up without a fight. In order to challenge neoliberal domination from its roots, it is imperative to reimagine the country, its institutions, the role of the economy, the character of citizen participation, the role of indigenous nations and traditional peoples, and the model of development.

The State that neoliberal policies built represents a culture of domination and an economic model aimed at extracting and assuming possession of wealth in all areas of human life. Accumulation through dispossession is a concept developed by David Harvey, which is fully at work in the assault on common goods for the concentration of wealth and the free movement of capital in Chile.

The massive mobilizations taking place in Chile over the past month were entirely spontaneous. They were sparked by young people who jumped the subway turnstiles to protest a minor transit fare hike, and many of these young protestors were treated brutally by the police. People reacted to defend their children, and in a matter of hours, the protests spread through the entire country.

The protestors’ demands are related to minimum wage, pension plans, free education, healthcare, the well-being of retirees, the public management of water, student loans, Indigenous autonomy, anti-patriarchy, fishing matters, children’s rights and protection, forestry management and the lumber industry, corporate tax evasion and illusion, and the role of the state in the economy. The ruling elite has stolen from the people for more than three decades. The fare hike was the last straw.

No one and everyone is leading this fight. The issues are what drive the mobilization, and I have never seen anything like this before. Every movement in Chile has been working to support their shared demands through social networks, including the labour and women’s movements, and the student, indigenous, and environmental movements. However, these movements are not coordinating or organizing these protests: they are truly spontaneous.

The recently organized Social Unity Platform, encompassing these sectors and many other social organizations, is becoming the forum for some form of coordination and has recently called for general strikes in October and November. The masses are in the streets everywhere, making these the largest protests since the fall of the dictatorship. While vandalism and looting have occurred, it is primarily multi-national corporations like Walmart and other local food chains that have been targeted.

The President has few options left. The Piñera government has committed serious errors, including infringements to the already biased constitution of an arbitrary State responsive only to the needs of neoliberal policies. His political capital is declining, and his impending resignation is whispered about in the business and military hallways. Citizens are demanding his resignation for the crimes that have taken place. He must be brought before the courts of justice for human rights violations.

The UN Human Rights Commission, as well as the Inter-American Commission on Human Rights (IACHR), are now in Chile monitoring abuses of power. As a result, the Chilean government has ended the state of emergency and curfew and has reorganized some of the ministries, all while retaining its hard-core neoliberal politicians.

The numbers, however, speak for themselves, indicating the government has little intention of backing down. According to the Human Rights Institute, 5,362 people have been arrested, hundreds have been tortured, and 2,381 have been hospitalized as a result of wounds from gunshots, pellets, and other weapons. Over two hundred people have been partially blinded by police pellet guns, and at least one young man, university student Gustavo Gatica, lost the sight in both his eyes due to shots from pellet guns. There are now 283 lawsuits against the police for torture, cruel treatment, and sexual violence. Piñera and his government will be accountable for the massive and brutal abuses perpetrated since October 18th by the army and the police.

The political and social crisis and general unrest has also led the Chilean government to cancel significant events, like the APEC meeting and COP25, as well as major soccer tournaments, musical concerts, and many other public events.

No one knows when and how this is going to end. However, Chile does not look the same as it did a month ago. While neoliberals continue to try to save the best part of the pie for themselves, demonstrators continue to occupy the streets of the main cities across the country. Something will emerge from the neoliberal wreckage, but the shape it will take is unknown.

Many questions are now being asked: How did long-term manipulation lead to the over-exploitation of millions of humble men and women? Who will deal with the huge social and economic debt the ruling classes now have with society? How will the elites give back the social and economic rights they practically confiscated from us?

In the meantime, the political elites and government have made some concessions by agreeing to freeze increases in subway fares, utilities, and highway tolls, and to increase pension payments for the poorest.

The government has also announced that there will be major constitutional transformations that will put an end to Pinochet’s constitution and call for a constituent assembly. Healthcare, medication, parliamentary expenses, and the exorbitantly high incomes of senators and deputies are also being targeted for reform. Without consultation or participation from the social realm, however, these agreements could receive support from the government but will be rejected by the largest social organizations, including unions, and environmental, student, indigenous, and women’s groups.

In 1970, Salvador Allende (1908-1973) inspired the world by promoting democratic socialism through an electoral process. He died resisting the coup d’état led by the armed forces and a coalition of right-wing political parties that took power on September 11th 1973. Once again, almost fifty years later, in a very different setting, the people of Chile may inspire the world in search of deep political transformation through mass and radical mobilization.

The people want peace but in the context of justice, freedom and democracy. In the meantime, thousands are taking to the streets on a daily basis to keep fighting for their demands and pushing back the neoliberal mantra.

Carlos Torres has been an activist in the World Social Forum and a researcher at the Centre for Social Justice in Toronto. After years in exile from the Pinochet regime in Chile, he has returned to research, writing and political activism there.

Oakland Socialist is the web site of the Oakland/East Bay Socialist Group - we carry news, information, ideas of the struggle of working class people in Oakland and around the world.