Home > English > NEWS AND ANALYSIS > The Left and Catalonia 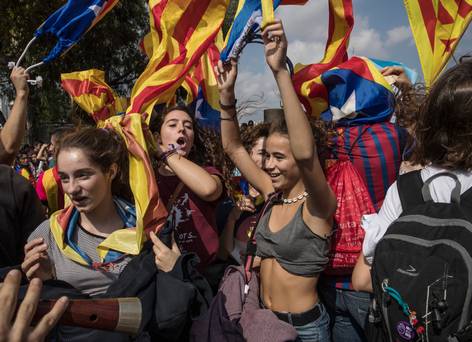 The Left and Catalonia

The Catalonia referendum this Sunday will become part of the history of Europe, possibly for the worst of reasons. I will not discuss here the substantive questions, which can be interpreted as being historical, territorial, respecting internal colonialism or self-determination. These are the most important questions, without which it is impossible to understand the current situation. My opinion on them is unassuming. Actually, many will consider my opinion irrelevant for, being Portuguese, I do tend to feel particularly solidary with Catalonia. In the same year that Portugal got rid of the Phillipes (1640) Catalonia failed the same objective. Of course, Portugal was a very different case, being a country that had been independent for more than four centuries and ruling an empire spread out through every continent. Nonetheless, the objectives had some affinity, Portugal’s success and Catalonia’s failure being more related than it may at first seem. Perhaps we should remember that the Spanish crown only acknowledged the “unilateral declaration of independence” of Portugal twenty-six years later.

The truth is, however, that even if these are indeed the most important questions, unfortunately they are not the most urgent ones at the moment. The most urgent questions have to do with legality and democracy. I engage with them here because they concern all democrats in Europe and the world. As decreed, the referendum is illegal in the light of the Constitution of the Spanish State. As such, in a democracy it can have no juridical effect. In and of itself, it cannot have the effect that is its direct objective, i.e. to decide whether the future of Catalonia is within or outside Spain. The party Podemos is right in asserting that “a unilateral declaration of independence is not to be accepted.” But the complexity emerges when the relation

First, the relationship between law and democracy is dialectical and not mechanical. Much of what we consider democratic legality in a given historical moment started as illegality, as an aspiration to a better and broader democracy. It is therefore imperative to evaluate the political processes in terms of their overall historical dynamics. In no case can they be reduced to conformity with the laws of the day.

Second, the rightist governments, above all those led by the neoliberal Right, have no democratic legitimacy when they declare themselves as strict defenders of legality because their practices consist in often systematic violations of the law. I am not solely referring to endemic corruption. I am referring, in the case of Spain, to the violations of the law of memory (referring to the crimes committed by the Franco dictatorship), to the recurrent violation of the statutory regions’ autonomy concerning financial transfers, for instance, to the violation of constitutional guarantees such as the right to decent housing or to the implementation of repressive measures of exception without the constitutional declaration of the state of exception. The Left must be careful enough to show no complicity with this conception of legality.

Third, civil and political disobedience is an inalienable patrimony of the Left. Without it, for example, the movement of the Indignados and the public turmoil it provoked a few years ago would not have been possible.

From a Left perspective, civil and political disobedience must also be conceived of in dialectical terms, not in terms of what it means under today’s legal frameworks, but rather in terms of what it means as an aspiration of a better future. This evaluation has to be made not only by those who disobey (and who usually pay a dear price for it) but also by those who can benefit from such an act in the future. In other words, the question to be asked is the following one: can it be hoped that the dynamics of disobedience will lead to an overall more inclusive and more democratic political community in its totality?

Fourth, the Catalonia referendum represents an act of civil and political disobedience and, as such, it cannot produce directly the political results it intends. Which is not to say that it cannot have other legitimate political results. It may well be the conditio sine qua non to reach in the future the intended objectives after the necessary political and legal mediations have been put in place. The Indignados movement was unable to fulfil its objectives of “real democracy now!,” but there is no doubt that, thanks to it, Spain is today a more democratic country. The emergence of the Left party Podemos and many other Left autonomic parties in the regions, as well as the Mareas (citizens’ movements) are, among others, the proof of this.

Given the aforementioned assumptions, a Left position regarding the Catalonia referendum could present itself as follows. First, stating unequivocally that the referendum is illegal and cannot yield the effect it intends (such statement was made). Second, stating that being illegal does not prevent the referendum from being a legitimate act of civil disobedience and that, even without juridical effects, Catalonians have every right to demonstrate freely in the referendum. Moreover it is a political democratic action of great importance in the current circumstances (such statement was omitted). This latter statement is what would distinguish a Left from a Right position, with the following implications.

The Left would denounce the government before the European institutions and sue it judicially in the European courts for violating the Constitution by applying measures of the state of exception without formally declaring it. The Left knows that the complicity of Brussels with the central government is solely due to the fact that the Spanish government is ruled by the neoliberal Right. It also knows that simply to uphold the law is moralistic and useless, since, as I mentioned above, the neoliberal Right only respects the law (and democracy) when it serves its interests. The Left would get organized to travel en masse from the different regions of Spain to Catalonia this Sunday in order to support, with their presence, the Catalonians’ right peacefully to exert their referendum, as well as to be actual witnesses to eventual repressive violence on the part of the Spanish government. It would request the solidarity of all European Left parties and organizations by inviting them to come to Barcelona and be informal observers of the referendum and of repressive violence, should it occur. The Left would thus demonstrate peacefully and, I would emphasize, like true Indignados, for the right of the Catalonians to a peaceful and democratic public gesture. It would document in detail all the illegalities by repressive forces and sue the prevaricators in court. If the referendum were to be violently prevented, it would be clear that it had happened with no complicity on the part of the Left.

The day after the referendum, with no juridical effect and whatever the result, the Left would be in a privileged position to play a unique role in the ensuing political discussion. Independence? More autonomy? A Plurinational Federal State? A Free Associated State as distinct from the caricature that Puerto Rico is? Every position would be on the table and

Catalonians would know that they would not need the local forces on the Right, which historically have always colluded with the Spanish government against the popular classes of Catalonia, to make prevail the position that the majority deemed better. That is to say, Catalonians, Europeans and democrats worldwide would learn about a new possibility of being Left in a plurinational democratic society. It would be a contribution of the peoples and nations of Spain to democratizing democracy in the whole world.