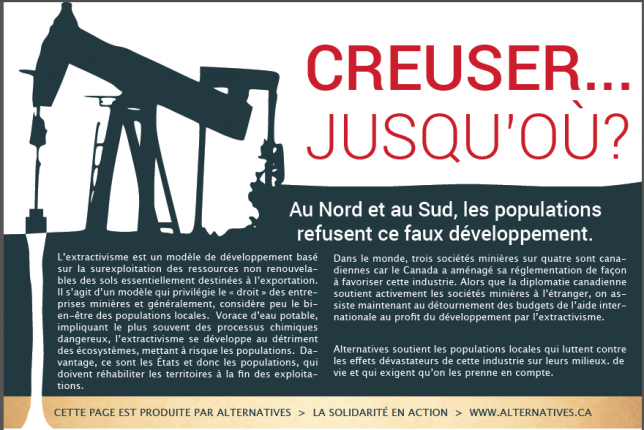 The Canadian Mining Industry Has Now Targeted the European Market

A lobbying with more impact than the result of any election, a direct influence on the structuring of the text of law, a division of the population with the aims of better conquering it, an imminent ecological disaster, exploration companies that are squandering people’s investments, forthcoming public health problems, preoccupations regarding the security of employees, a deterioration of cultural patrimony… After the discoveries made in African, South American, and Asian countries, Romania and Europe as a whole are the new subjects of the Canadian acquisition, exploration and exploitation methods of oil deposits.

Rosia Montana, a commune in the Alba County of Romania, is where the Canadian Gabriel Resources threatens to spill 13 000 tons of cyanide per year to exploit one of the most important open pit gold mines in Europe. This means that there will be a production of 215 million cubic meters of cyanide waste on the worksite that should be stocked permanently in a vast depot measuring 8km in diameter and 400m in depth. This could affect a valley where a 2000-year-old village exists. In order to do this, Gabriel Resources has brought the political powers to a standstill by claiming 100 000 € in damages and interest to the previous minister of the environment, Attila Korodi, and to the secretary of State, Silviu Stoica, in response to their trying to put an end to the project. The Romanian Parliament plans on relinquishing sovereignty to the mining company the next time the law is put to vote. It would then have the ability to expropriate populations residing around the site, plan out the territory the way they see fit, agree on the cost of the damages from the expropriations, even widen the perimeter being exploited, becoming in a sense a state within a state. Meanwhile, their project is terrifying. It involves using dynamite to destroy the four summits of a mountain in which there are mines dating back to the Roman Empire. UNESCO has considered some of these sites for protection. In addition, the use of dynamite may dispel air filled with toxic particles that could greatly damage the health of people living in he region.

All of this for gold…Ore without social or technical use, that already exists in abundance. It is only really useful to banks and the jewelry industry. This exploitation requires a lot of water, on top of the huge threat it poses to ecosystems. This is only the beginning of the preoccupying intentions of Gabriel Resources; sources still need to confirm but there are rumors that there will also be expropriation of uranium.

A lot of people are speculating about how much corruption has taken place in this situation. The 700 jobs created as a result do not justify the existence of the project. When the NGO Albernus Maoir obtained from the Appeals Court of the Alba Iulia region, a resolution that would make illegal any urban plans proposed by Gabriel Resources in 2008, the latter got into contact with the minister of the Environment and the Forests, Laszlo Borbely, and the project regained its authorization to keep exploiting. The will of the Canadian mining lobby seems stronger than the Romanian people’s and the elected officials’ that are supposed to represent them.

For the past couple weeks, waves of revolt have risen against this project, the likes of which have not been seen since the end of the reign of the Communist Regime. This has taken place in Romanian cities as well as abroad, uniting political parties that usually have opposing views.

English Canadians often say “the world needs more Canada.” In Romania, they have enough. This also applies to Greece. The latter country, having been ruined by the minds behind global finances, is considering getting involved with the Canadian mining industry, specifically with the Eldorado Gold project set in the rich ecosystem of Skouriès, making the neighboring populations very worried.

Three out of four mining industries in the world are Canadian. A lot of them don’t directly come from Canada. They register themselves from Australia, Israel, France, Sweden or the United States for example, because the administrative framework in Canada provides immunity to them. The state has catered its regulations and fiscal policies to favor the financing of speculative exploration activities such as Ronia Montana. It is exceptional that a court has allowed for a criminal case to be held against a company for activities led outside the country’s borders. Canada provides insurance to its mining societies in cases of corruption and abuse abroad, as even the OECD is observing. Canadian diplomacy actively supports the various mining industries. Even though, on a national as well as international scale, the Canadian mining industry has a poor record in environmental, social, political, security and fiscal matters. It is easy to testify to this when consulting the plethora of documentation that exists on the matter. Witnesses of regular abuse, and criminal activity, hail from various sectors such as, parliamentary commissions, judicial courts, UN experts, independent consultants, economic specialists and veteran journalists.

By Alain Deneault, author, with William Sacher of "Paradise Under the Earth, How Canada Has Become a Hub for the Global Mining Industry," Montreal/Paris, Ecosociete/Rue de l’echiquier, 2012, and of "The Mining Industry is Ruling Canada", Paris, Le Monde Diplomatique, September 2013.

Translation from French by Marianne Hill.