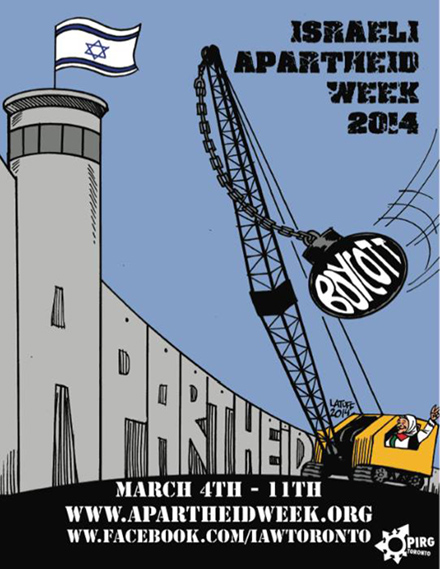 The Academic Boycott of Israel Demands Freedom for All

Wednesday 5 March 2014, by Faculty for Palestine

Monday March 3rd marked the start of Israeli Apartheid Week (IAW) 2014 on campuses across Canada. 2014 is an especially important year for IAW in Canada because it is an opportunity to hear a narrative that runs counter to the one that Prime Minister Stephen Harper presented during his recent visit to Israel, an understanding of the Israel-Palestine conflict that was then amplified by an uncritical mainstream media.

Speaking in the Israeli parliament in January, Harper accused the global movement for boycotts, divestments, and sanctions against Israel (BDS) of being anti-Semitic. The so-called new anti-Semitism, Harper said, is especially prevalent on campuses, where “intellectualized arguments against Israeli policies thinly mask the underlying realities, such as the shunning of Israeli academics and the harassment of Jewish students.” In addition to falsely equating the criticism of Israeli policy with anti-Semitism, Harper misrepresented the peace-seeking character of a movement that has been embraced by many, including Jewish students and academics, in Israel and around the world.

As members of Faculty for Palestine, we reject Harper’s spurious claims about the academic boycott. Our commitment to BDS responds to the 2004 call from Palestinian academics and intellectuals to “boycott all Israeli academic and cultural institutions” as a way of pressuring Israel to comply with international law and respect Palestinian rights.

Struggle for the Rights of Everyone

The academic boycott of Israel is a peaceful, democratic tool in the struggle for the rights of everyone living in Israel-Palestine irrespective of their ethnicity or religion. While the Israeli state protects the freedoms of some of its citizens, Palestinians face many injustices including exile, blockades, evictions, home demolitions, punitive arrests, unfair trials, and checkpoints that restrict freedom of movement. For instance, Palestinians’ right to education has been severely impeded by university closings, roadblocks, and the destruction of schools during the 2008-9 Israeli attack on Gaza, as documented by Israeli human rights group Gisha, the International Court of Justice, and the United Nations.

The BDS movement seeks freedom and justice for all people in Israel-Palestine by making clear demands that are grounded in international law. It declares that Israel must end its illegal occupation of Palestinian lands seized in 1967 and dismantle its illegal separation wall, provide full equality to Arab-Palestinian citizens of Israel, and recognize Palestinians’ right of return, which is stipulated in UN Resolution 194.

Many Canadian universities have institutional links to Israel and both governments are pressing for closer bonds. Yet Israeli academic institutions are not neutral players in the oppression of Palestinians. In fact, they play crucial roles in developing military and surveillance technologies, structuring government policies of dispossession, occupying confiscated lands, and promoting ideologies that justify and institutionalize Israeli apartheid. For example, Hebrew University has constructed buildings in East Jerusalem on land that was confiscated from Palestinian families in 1968, in direct contravention of article 49 of the Fourth Geneva Convention.

As faculty, we are responsible for ensuring that our institutions are not implicated in human rights violations. Through the academic boycott, students, staff, and faculty can pressure our institutions to abide by international law in their transnational partnerships.

As the struggle against apartheid in South Africa showed, boycotts, divestment, and sanctions can help transform unjust systems and achieve greater democracy. During its first ten years, the BDS movement for Palestinian freedom has become a massive global campaign, endorsed by highly-respected figures such as Stephen Hawking, Alice Walker, and Desmond Tutu, as well as academic associations including the American Studies Association, the Native American and Indigenous Studies Association, and the Association for Asian American Studies. Significantly, the University of Johannesburg broke its relationship with Ben-Gurion University in Israel in 2011. Eleven Canadian university student associations have passed motions supporting BDS, and students at York University and the University of Toronto launched campaigns to divest from companies that support Israeli apartheid.

On his trip to the Middle East, Harper refused even to discuss Israel’s settlements on the grounds that this would supposedly “single out Israel for criticism.” Yet Canada routinely exempts Israel from criticism for actions that would be condemned elsewhere, while elected officials and university administrators have attempted to shut down critics of Israeli policy on campuses and elsewhere by, among other things, calling them anti-Semitic

We recognize that struggles in Israel-Palestine raise complex issues that require open and wide-ranging dialogue. Some critics have misleadingly claimed that BDS seeks to shut down these conversations. The academic boycott targets only financial and political ties between institutions and does not seek to silence individual academics.

Harper’s dishonest equation of criticism of Israel with anti-Semitism will not stop the Palestinian-led BDS movement for peace and justice in Israel-Palestine. In fact, the government’s increasingly aggressive rhetoric only signals the growing strength of a campaign that seeks to foster genuine dialogue and to achieve a just and lasting peace in the region.

The discussions that will take place during IAW 2014 offer an antidote to the approach the Harper government is taking. We particularly want to highlight an event that took place in Toronto on Tuesday March 4th. Yusuf Saloojee, who was South African Ambassador to several countries and was active in that country’s struggle against apartheid, delivered a keynote address that underscored the linkages between South African Apartheid and Israel. Attendees also heard from Hind Awwad, the former coordinator of the Palestinian Boycott National Committee (BNC), and from Chand[ni] De-sai, a member of Students Against Israeli Apartheid who provided an example of a specific BDS campaign in Canada. The evening fulfilled the promise of IAW to be a welcome corrective to the story the Harper Conservatives have told about Israel-Palestine.

Faculty for Palestine (F4P) formed in spring 2008, and is a committee of the Coalition Against Israeli Apartheid (CAIA). The network includes over 550 faculty of all ranks (tenured, contract, emeritus, independent researchers, retired, visiting scholars) from over 40 universities and 15 colleges across Canada. F4P works in support of the Palestinian Campaign for the Academic and Cultural Boycott of Israeli (PACBI).