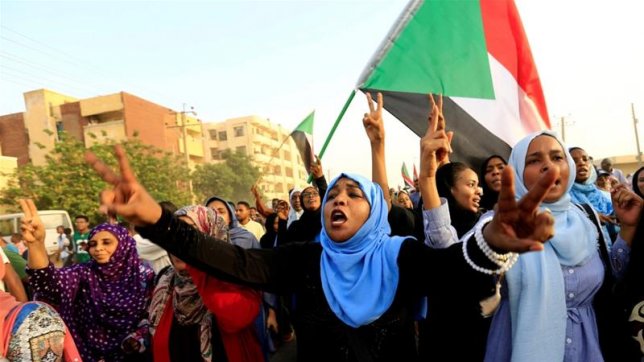 Sudan’s Youth Showed Us How to Counter Sexual Violence

"We need to understand that sexual violence is not an unintended result of the actions of political regimes, but rather a key instrument of their power."

In Sudan, sexual violence is a persistent problem that has roots not only in misogyny, homophobia and politics of domination but also in the state’s methods of consolidating power and its unconventional and destructive reliance on the militarisation of civilians.

In the last 30 years, we have witnessed a fundamental transformation in Sudan’s civic space and the role "civilians" play in the affairs of the state. The Sudanese government’s failure to engage peacefully with its citizens has led to the escalation of civil wars, creating a state that is reliant on militarisation.

The reliance of the state on the militarisation of civilians in the form of militias has legitimised loosely organised armed groups to exert their power through violence with the aim of consolidating the power of the state. This has largely undermined the rule of law in the country, enabled dangerous state-supported militia to control land and resources, and normalised sexual violence, enslavement, rape, and the terrorisation of populations within Sudan, particularly in Darfur, South Kordofan and the Blue Nile as an extension of state power.

These militias operate inside and outside of the boundaries of the state, thus, they manage to claim state authority without the limitations and expectations of conduct that state-led forces may be held to account for. Their human rights violations, and especially acts of sexual violence against women and girls, are being concealed by the state and ignored by international and regional actors.

Like elsewhere in the world, in Sudan the international community appears to be taking the lead in the fight against sexual violence, with agencies and NGOs with action plans drafted miles away from Sudan setting direction and pace. These actors maintain a stagnant approach and narrative that is loaded with victimhood, labelling the Sudanese society as being culturally and ideologically crippled, and thereby compromising the capacities of national actors, civil societies, and activists to stand against sexual violence.

Moreover, the international community contributes directly to the exacerbation of sexual violence by ignoring the basic facts of social transformation and, most importantly, turning a blind eye to the contextually-specific root causes of sexual violence, which are the political dynamics that capitalise on violations against civilians as an instrumental means to sustain power.

Nevertheless, while actors that are traditionally tasked with addressing sexual violence remain unable or unwilling to end Sudan’s sexual violence epidemic and help its survivors achieve justice, the Sudanese civil society, with its very limited resources, has taken action to resolve this problem. And what they managed to achieve in a short amount of time, in the gravest of conditions and against the most challenging of obstacles, should be a lesson to everyone looking for ways to address sexual violence adequately across the world.

After the fall of Omar al-Bashir’s regime earlier this year, young men and women in Sudan, who have been responsible for keeping the fire of the revolution burning in the country, seized the opportunity to freely express their opinions and found a protest camp in the heart of Khartoum to do just that. The camp, which came to be known as the Khartoum Sit-in, lasted for almost three months.

Khartoum Sit-in was especially lively at night when families with children poured in from all parts of the country to partake in discussions, listen to speeches, and watch performances by Sudanese artists. The space was a stage for dialogue and unified Sudanese mobilisation. There was representation from multiple interest groups such as political groups from marginalised ethnic communities, lawyers’ associations, youth groups, and women’s groups. The sit-in was referred to as a place of learning and a place where different segments of Sudanese society were given a public platform to speak about their grievances and make demands for a more inclusive Sudan. It presented a glimpse of what a peaceful, inclusive and democratic Sudan could potentially look like.

But on June 3, the sit-in area was raided by the Rapid Support Forces (RSF) and other factions of Sudan’s security apparatus. The disbandment of the protest camp was brutal with a death toll of almost 400, and hundreds of recorded rapes targeting both men and women.

On June 3, and the three days that followed, sexual violence was used as an efficient tool by the state’s security forces to break the civilian protesters’ will in an attempt to completely defeat Sudan’s revolution. Many women and girls were gang-raped on the spot, while others were kidnapped and continuously raped for days elsewhere. In the worst cases of rape, victims were eventually killed and their bodies were thrown into the river.

These crimes took place at the gates of the Sudanese Army’s headquarters. Some protesters ran towards the building to seek protection, but the military chose to close the gates and ignore the screams of civilians. Presidential Palace where the Head of Sudan’s Transitional Military Council and the current Lead of the Supreme Council is seated was also no more than two kilometres away from the site of these atrocities. The premises of the European Union, the Embassy of the United Kingdom and the United Nations head office in Sudan were also only a stone’s throw away from where hundreds of killings and rapes took place.

The fact that the regime’s security forces felt they could commit these heinous crimes with impunity, in close proximity to Sudanese state institutions and representatives of international powers, clearly demonstrated how they lack any sense of legal responsibility or fear of accountability. Some soldiers even took videos of themselves as they assaulted and killed civilians. There were also videos showing women being fondled and women’s underwear being waved in the air holstered on army canes.

These images were undoubtedly disturbing, but they were not that shocking for people who are familiar with the brutal methods Bashir’s security forces and militiamen have long been using to try and control the masses. The swift, brave and well thought out way Sudan’s young activists responded to this attack, however, was a pleasant and much-welcomed surprise for all Sudan watchers.

These activists bounced back on their feet in no time after this vicious attack and lifted the rest of the country with them as they did. They did not abandon their responsibility or try to run away. They did not break despite the immense burden that they were carrying on behalf of the nation. They stood up and extended their hands to the hundreds of male and female sexual violence survivors and the families of those who were killed.

They did that with no prejudice and they did that all alone. They had no support from multimillion-dollar agencies and NGOs. They had no rape kits. They had no complex matrices to follow or fancy conference rooms to strategize in. There were no foreign agents or "experts" behind them controlling their narrative and actions.

All they had was a bunch of volunteers and the discipline and the commitment to support the survivors of violence.

So, how did the activists do all of that?

The answer is simple; they were not distracted. They were completely focused. They clearly understood the root causes and politics behind sexual violence. They approached sexual violence as a crime connected to the power relations, and to my surprise, they did not undermine how personal it is as a crime. And perhaps most importantly, they understood that supporting survivors was an essential part of their struggle for change and a better future.

As someone who has worked on challenging sexual violence in conflict and post-conflict situations for decades, I can say that these young activists did everything correctly; the respect, the confidentiality, the support and the referral. Most importantly, they capitalised on acts and values of solidarity.

They even organised days of civil action against sexual violence across the country. Uniting under the banner #PinkforKandaka, hundreds of female and male activists came out onto the street carrying signs that said "It is not your fault", "I was raped, and I am not ashamed". They shared the contact details for the limited number of support centres that are available. Most importantly, they did the leg-work and reached out to those who were assaulted and raped. They showed that they are not alone.

For years, Sudanese civil society has been haunted by the stagnant discourse of victimhood which surrounded discussions on sexual violence and Female Genital Mutilation. This also caused Sudan’s social and cultural issues to be seen as a fixed stigma, and the basic principles of social and political transformation and development to be ignored.

As the international agencies and their surrogates’ discourse on sexual violence continue to capitalise on the abstract stagnation of the Sudanese society to generate resources, their engagement has often become irrelevant and sometimes meaningless considering the scale and nature of the situations. By continuing to use the same approaches and narratives, despite evidence of their lack of efficacy and harmful essentializing victimhood portrayals, the international community became complicit in the continued pervasiveness of sexual violence in Sudan, including the Khartoum Massacre.

To address sexual violence we need to work in solidarity with local civil societies and activists. We need to rethink and reconnect the dots as activists and not as sub-contractors. We need to deconstruct the ownership of the social change process by the international community. We need to reject discourses which depoliticise sexual violence in the global south. We need to understand that sexual violence is not an unintended result of the actions of political regimes, but rather a key instrument of their power. The civil society in the global south needs to regain its sovereignty and liberation from the alien terms and regulations that are often based on assumptions that we are incapable and untrustworthy.

This type of relationship is often counterproductive and damaging to the environment of activism. It compromises any acts of solidarity. To address sexual violence, we need to learn from the people’s movements such as the one in Sudan with humility and see how we can be of help.

Hala Al-Karib is the Regional Director of the Strategic Initiative for Women in the Horn of Africa (SIHA).