Home > English > NEWS AND ANALYSIS > Sharon: Didn’t’ Stop At Red, But Knew Where He Wanted To Go 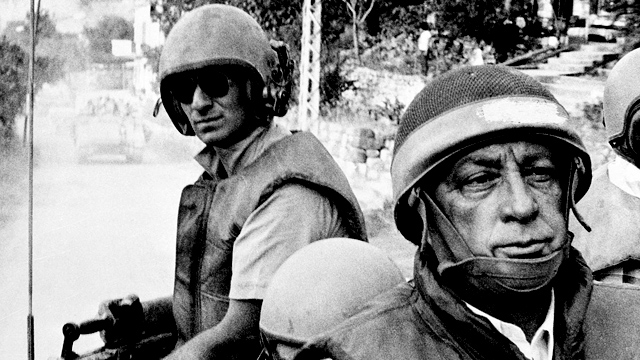 Sharon: Didn’t’ Stop At Red, But Knew Where He Wanted To Go

It Does Not Stop at a Red Light is the title of a (bad) Sharon biography, written in the wake of Israel’s 1982 attack on Lebanon. Sharon ’s biography is that of a fighter who has no qualms, ignores the value of human life, has no respect for hierarchy, mocks rules of the democratic system and perceives military force as the alpha and omega of any political strategy. His leadership of the disastrous Israeli military Commando 101 in the 1950s, which organised deadly raids in the West Bank and Gaza Strip, raids which spared neither women nor children. The 2003 massacre in Jenin. The bloody pacification of Gaza in 1970 and, of course, the massacres that accompanied the Israeli invasion and occupation of Lebanon in 1982.

Sharon’s military designs, always offensive, did not take into consideration the human price paid by Israeli units, as shown in the battle of Mitleh in the Sinai in 1956, the crossing of the Suez Canal in 1973, or the June 1982 conquest of Beaufort in Lebanon. Such a military policy vision meant that Ariel Sharon was on several occasions the reason for military failures, like the case of Lebanon in 1982.

But Sharon was not only a kind of Israeli Jacques Massu: he was also a politician. In fact, Sharon was the only true Israeli politician since David Ben Gurion, guided, as was the founder of the Jewish state, by a national project, consistent and long-term. And precisely because Ariel Sharon had a long-term, global vision, he was ready to make concessions on what seemed secondary or marginal to him (such as the small Israeli settlements in the Gaza Strip, for example).

Compared to small political types like Ehud Olmert, Benjamin Netanyahu and Ehud Barak, Ariel Sharon was a giant because, unlike them, he was animated by a true vision and political strategy for decades to come.

Ariel Sharon stated that "Israel’s war of independence has not yet ended" or, in other words, the State of Israel is not yet as it should be. That is why, just like Ben Gurion , Sharon opposed defining the boundaries of the state of Israel. "In fifty years. Maybe," he said. This is the reason for his fierce opposition to his friend Yitzhak Rabin who, by signing the Oslo Accords with the PLO, was working to end the conflict by accepting a partition of historic Palestine and Arab recognition of Israel in its borders of June 4, 1967. "The border is our tractor or the traces of its last furrow " said both Ben Gurion and Sharon, hence the need for time ("at least fifty years") to “Israelise” space. For Sharon there was no divine promise or historical rights, but the need to create facts on the ground.

Already in the late 1970s Sharon suggested creating a "Palestinian state," i.e. Bantustans with limited autonomy in areas with dense Palestinian population. Thus, long before the Oslo process, Sharon proposed the creation of cantons in the order to get rid of the Palestinians and thus preserve the Jewish character of Israel demographically in a state that stretched from the Mediterranean to the Jordan.

A vision, a goal and a strategy underlie this so-called Sharon Project: it is far from military brute strength, and this is why the former prime minister-general was so dangerous. With his stroke and subsequent departure from the political scene, Palestinians were able to avoid the worst. Compared to Ariel Sharon, leaders who succeeded him and those standing in the wings are hacks, easily handled and as we say in Hebrew, “pressurised” at will. This is an opportunity for the Palestinians to seize power.