Home > English > NEWS AND ANALYSIS > Rohingyas Near End: ’Terror There Is, But It’s Of The Burmese (...) 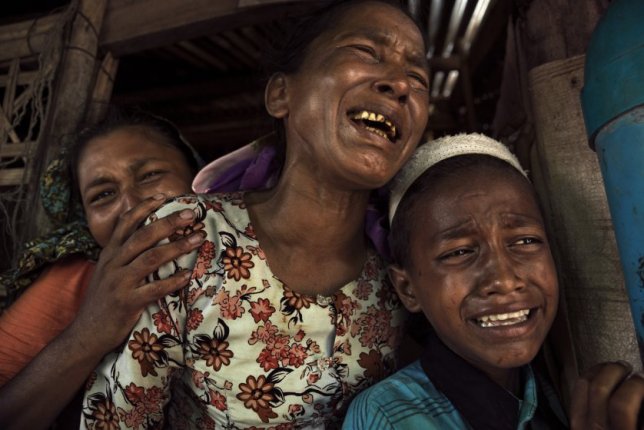 Rohingyas Near End: ’Terror There Is, But It’s Of The Burmese Regime’

The Burmese government is pursuing a policy of ethnic cleansing against the Rohingya, who are being driven out of the country. Never has the persecution of this Muslim minority reached such a level of violence. The nature of the Burmese regime, the policy of land grabbing and the geopolitical stakes are largely responsible for the paroxysmal nature of this humanitarian crisis.

The Rohingya constitute one of the main stateless populations in the world. This has not always been the case. The Burmese authorities have gradually deprived them of previously recognized rights, imposed increasing restrictions on economic activity, marriage, access to education, and have violently repressed them to reach the point of this wave of terror that resembles a systematic policy of ethnic cleansing: the Rohingya must die or leave to never return.

Burma is composed of fourteen states and administrative regions. The official name of the Arakan is Rakhine State. It is located in the centre-west of the country, bordering the Gulf of Bengal, and shares a short border with Bangladesh. The Rakhine is also inhabited by a Buddhist population, itself marginalized and discriminated against: it is indeed the poorest state in the country. There do not seem to have been any particularly violent conflicts between the two communities in the past.

The history of the Rohingya is poorly known, and has become the subject of political controversy. However, the presence of Rohingya in Arakan goes back a long way in the past. On the other hand, a wave of immigration took place in the late 19th and early 20th century, during the reign of the British - which the Burmese nationalists reproach the Rohingya for.

The question of citizenship is complex in Burma: it does not automatically grant the same rights to everyone. The Kam (Muslims) are thus recognized, but their freedom of action remains strictly controlled. The Rohingya have in the past had identity cards and the right to vote in certain elections.

In 2012, the Burmese regime published a list of 135 officially recognized ethnic groups. It did not include the Rohingya who are thus without any citizenship whatsoever. Under the pressure of the Buddhist nationalists, the regime has imposed increasingly discriminatory measures on the Rohingya: they can no longer vote or run for elections. They must be registered as Bengalis (while Bangladesh does not recognize them). The prohibitions are multiplied on the economic level (they cannot open a shop and trade with Buddhists) and socially: restrictions in access to care, education, marriage (placed under administrative control), children they may have, travel and so on. The separation of communities in Rakhine State has become strict.

The anti-Muslim campaigns have become increasingly aggressive. In 2012, following a rape rumour, Buddhist nationalists burned houses, killing more than 280 Rohingya, causing thousands of people to flee, many by boat. They were often denied refuge by neighbouring countries. A small armed incident caused by an unknown group was used by the army and police to systematically occupy Muslim territory.

Faced with such a situation, activists formed the Arakan Rohingya Salvation Army (ARSA) opposed to fundamentalism and presenting itself as a movement of self-defence and liberation. Many ethnic minorities are armed in Burma and have been able to resist government forces for decades. This was not the case for the Rohingya and it still is not. Indeed, the ARSA has only extremely rudimentary weaponry. In August 2017, it attacked positions of the police or the army. The fighting killed more than 100 people - including a dozen police officers, all the other victims being the attackers.

On the “military” side, ARSA is a very minor problem for the Burmese authorities, who have seen others and who know how to negotiate when they want - however, in this case, they do not want to. The entire Rohingya community has been criminalized (“Bengali terrorists”"). Terror there is indeed, but it is that of the regime.

We are witnessing a vast operation of ethnic cleansing, with systematic massacre of civilians, villages burned one by one, a hunt for fugitives and so on. Already more than 400,000 Rohingya have crossed the border (at the risk of their lives) to take refuge in Bangladesh, but also in Malaysia, Thailand and even in Indonesia, finding themselves totally deprived and exhausted, with many orphaned children.

Prior to these events, in Rakhine State, the Rohingya population was estimated at 1.1 million. Exodus phases have existed in the past. Since the late 1970s, a million people have already fled persecution. The conditions in the host countries are often deplorable.

Stateless they had become, stateless they remain. International institutions are launching important aid programs; unfortunately, experience shows their limits or, in the long run, their perverse effects when the conditions for a collective taking charge of their future by the refugees themselves are not met.

Combatant ethnic minorities in Burma have in the past received support from foreign governments (including China). Nothing of the sort for the Rohingya, even from Bangladesh, whose border guards have too often harassed and repulsed refugees fleeing the massacres.

In Burma itself, no significant force has defended them – no other ethnic minorities, and not Aung San Suu Kyi, historical opponent of the military junta, Nobel Peace Prize winner and now Head of State. She adopts the discourse of Burmese nationalism rather than that of human rights.

On 19 September 2017, Aung San Suu Kyi, for the first time, acknowledged the problem (without admitting its gravity) and declared that the return of the refugees would be organized after verifying their citizenship (which has been withdrawn!). We will see what happens. Until now, however, with her spokesperson, she had firmly stood by the army, even denouncing the UN aid agencies as “accomplices of the terrorists”. She has demanded that the United States stop using the term Rohingya. She asserted that all the noise made about the situation in Rakhine State was only a disinformation campaign.

One may fear that Aung San Suu Kyi’s posture will reveal how her vision is traditionally “Burmese”" and her lack of empathy towards the Rohingya. However, it also reflects the reality of power relations in Burma. Even though the National League for Democracy (NLD) won the 2015 legislative elections, the army still holds decisive powers. The Constitution grants them three key ministries: Interior, Defence and Borders and guarantees them 25% of the seats in Parliament (i.e. the right of veto on any constitutional amendment).

It has the upper hand on everything concerning national security - and therefore on the Muslim territories. It is backed up by the police and by extreme right-wing Buddhist militias. An influential far right Buddhist movement has formed behind the figure of the monk U Wirathu, racist and xenophobic, for whom Buddhism authorizes (or even preaches) the killing of the Rohingya.

Ashin Wirathu was sentenced to 25 years in prison in 2003 for inciting racial hatred, but he was amnestied in 2010. He formed the movement 969 targeting Muslims (some 4% of the population of the country!) The latter are said to threaten Burmese “identity” and “race”, based on Buddhism, and aim to Islamize Burma by marrying Burmese youth.

Wirathu’s sermons contributed to the inter-communal violence of 2012. After the banning of the 969 movement, he created Ma Ba Tha, the association for the protection of the Race and Religion; then the Philanthropic Buddha Dhamma Foundation. The latter is largely composed of laymen, which allows him to circumvent the successive prohibitions of his hierarchy. Wirathu uses social networks to pour out his hate speech.

The influence of this extreme Buddhist right is felt even in the decisions taken by the regime. For example, in 2015, the government adopted “laws on race and religion”", which include limiting the number of children Muslim couples may have (not just Rohingya) and “protecting” Buddhist women marrying Muslim men, especially by forbidding them to convert to the religion of their spouse.

A crisis that culminates

A sign of the times, the victory of the NLD did not trigger a real process of democratization; we live in a period where regimes tend to become increasingly authoritarian and not the reverse. The army has managed to perpetuate its rule. The Rohingya crisis has culminated in an affirmation of its hegemony and this is not by chance. It also exacerbates Burmese nationalism and, for the regime’s clientele or the transnationals, it allows the seizure of the lands of those Muslims massacred or driven out without hope of return.

The ethnic cleansing suffered by the Rohingya is the extreme expression of a general process of dispossession in Burma of the popular strata. There are many forced displacements of the population. The green light was given by the government to land grabbing for the benefit of large investors. The country has long been on the margins of the “development” of capitalist globalization. It is now opening to foreign capital. It has become a “new frontier”.

Burma is the focus of intense geopolitical competition. India has financed and built, for example, the port of Sittwe (the capital of Rakhine!), to connect the (Indian) state of Mizoram to the Bay of Bengal. The Chinese government has many investments in ethnic minority areas and is continuing the construction of a pipeline between Sittwe and Kunming in China. As for the United States, they consider it essential to counterbalance the growing influence of Beijing in this pivotal country.

Political manœuvres, economic interests and geopolitics have a great deal to do with the violence with which the Burmese authorities now settle the “Rohingya question”". The complexity of ethnic and religious relations in Burma is obviously a factor to be taken into account, but their exasperation is due to causes that have nothing “spiritual” about them.

This also explains why, beyond the verbal protests, the European Union and the United States are so close to the Burmese regime. The cessation of the policy of terror and ethnic cleansing is not considered a priority.