Home > English > NEWS AND ANALYSIS > Protests in Finland: No to NATO, Yes to Peace 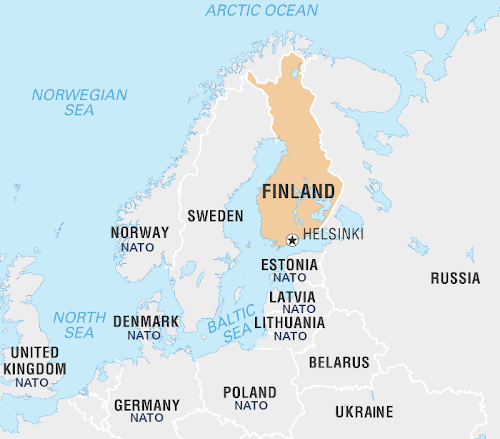 Protests in Finland: No to NATO, Yes to Peace

Sunday, May 15th was a sad day for Finland’s long history of military non-alignment. On this day, the country’s President Sauli Niinistö and Prime Minister Sanna Marin officially announced what everyone already knew – that Finland would be officially applying for NATO membership.

Given its long border with Russia, Finland cultivated active neutrality and non-alignment during the Cold War. Following the collapse of the Soviet Union, however, the country has gradually moved closer to the Western camp. Along with Austria and Sweden, it joined the European Union in 1995. Finland has also cultivated a close partnership with NATO.

However, Finland becoming a full member of the US-led NATO alliance had seemed unlikely until the Russian invasion of Ukraine on 24 February. Before the invasion, there was no majority in favour of NATO membership. But since then, Finns have strongly identified with the human suffering of Ukrainians at the hands of the Russian military and the government has successfully channelled this popular outrage into support for the Finnish ruling class’s longstanding preference for NATO membership.

According to YouGov polling from 25 April drawing on representative samples of 16 EU member countries plus the UK, Finns are now the most likely to believe that Russia is entirely to blame/more responsible than NATO for the current situation in Ukraine.

In this emotive political climate, it has been difficult for opposition voices to get a fair hearing in the media or in everyday conversation. A wide variety of arguments in favour of neutrality and non-alignment have been unfairly smeared as pro-Putin, which is ironic given that Finland’s international reputation has long been associated with these policies. This narrowing of the scope of legitimate political debate has also occurred despite the fact that Russia is struggling to make military gains in Ukraine and has shown no interest at all in undertaking similarly aggressive military action against Finland.

Given all this, the 400-500 people who gathered in Helsinki’s Senate Square to protest against Finland’s NATO membership were taking a brave step. They carried placards denouncing Putin’s aggression in Ukraine but clearly stating that further military escalation and alignment would just heighten tensions and insecurity. Some demonstrators and organizers spoke convincingly to journalists about the continued virtues of an independent Finnish foreign policy geared towards directly promoting peace and security. Many were disheartened that there has been no proper democratic debate about Finland’s NATO membership and that the decision is being rammed through the parliament at lightning speed.

The organizers of the demonstration included the Association of Conscientious Objectors (AKL), the Defenders of Peace, Left Alliance Youth, Women for Peace, PAND Artists for Peace, and Communist Party Youth. It was also supported by the anarchist A-Group.

The march, which drew large enough numbers to be reported in the main Finnish newspapers, ended in front of the Finnish parliament, where speeches were delivered on its steps denouncing war and imperialism in all their forms – including Russia’s invasion of Ukraine, the US invasion of Iraq, and Turkish oppression of the Kurds – and in support of peace, neutrality and non-alignment.

Police stopped one man who they claimed was shouting aggressively in Russian at passing demonstrators holding up a ‘Russia Out of Ukraine’ banner as they left the Senate Square. But apart from this negligible incident, the protest was entirely peaceful and nurtured a spirit of democracy which has unfortunately been sadly lacking in recent parliamentary debate and in newspaper and television coverage.

As the Russian war in Ukraine looks set to drag on with no peaceful settlement in sight and NATO militarism throws more fuel on the fire with the aim of buttressing US global hegemony against Russia and especially China, protests such as this one in Helsinki could in the best case scenario nurture the germs of a new anti-war movement with a clear, consistent and historically-informed anti-imperialist outlook.

On Tuesday 17 May, two days after this report was written, the Finnish parliament voted by 188-8 to approve the government’s application for NATO membership.

Despite the party’s official stance of opposing NATO membership, the majority of Left Alliance (Vasemmistoliitto) parliamentarians voted to support the application. Of the 15 who voted, nine – including the current party chairperson and government education minister, Li Andersson – were in favour. The other six, who comprised the bulk of the total parliamentary opposition, voted against.

This decision represents the final nail in the coffin of the foreign policy ideals associated with the Finnish welfare model. More generally, it is the culmination of the decades-long historical process through which Nordic social democracy has gradually given way to western neoliberalism.

Kyle Bailey is a PhD candidate in the Department of Politics at York University in Toronto. His latest article is “Stakeholder Capitalism Against Democracy: Relegitimising Global Neoliberalism” in the Journal of Australian Political Economy.