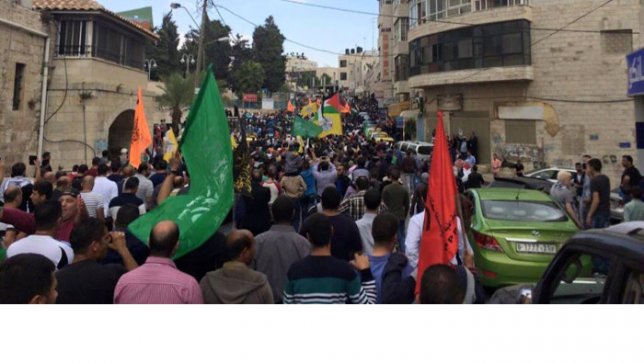 Friday was a bloody day in Palestine, as clashes with Israeli military forces reverberated throughout the West Bank, Gaza Strip and Jerusalem. Ten Palestinians were killed, six from the Gaza Strip. Over 200 Palestinians were wounded by live and rubber-coated steel bullets whilst hundreds of others suffered from the effects of tear gas. The clashes took place in Palestinian villages in located in the West Bank’s Area C, under Israeli control, and in friction zones with Israeli soldiers around the cities of Bethlehem, Ramallah and downtown Hebron. In Gaza the clashes occurred primarily in the southern area of the coastal strip. Palestinians felt in a war, as Israeli soldiers invaded numerous northern West Bank villages, including Beit Furik, Azzoun and Awarta. Israeli settler attacks took place in Hebron, as settlers stoned Palestinian-owned homes in the downtown areas of Al Ras, Tel Rumeida and Ja’bari. Two children were reported wounded from stones thrown by settlers at homes.

The Palestinian Ministry of Health reports that in the past ten days, Israel has killed 14 Palestinians, wounded 700 while causing some 1,000 Palestinians to be overcome from the effects of tear gas.

Friday October 9, 2015 is a remarkable day in Palestine, a day in which the Palestinian youth were able to turn the tables and send messages in all directions and to all involved. The clearest and most common message of the protesters is that we the Palestinians are still living under colonialism and injustice. We seek freedom and independence – not through the failed peace process, but through a struggle against the Israeli occupation through which we can claim our rights. In some demonstrations, including the one in the West Bank city of Bethlehem, the Algerian flag was raised, symbolising and commemorating the Algerian revolution. Palestinians were thus saying that just as the Algerian revolution resulted in liberation from colonization, the Palestinian people should take the same path.

Another clear message on Friday was that Jerusalem and the city’s al Aqsa mosque are a symbol of unity for the Palestinian people. This was clear from the numerous slogans and speeches made in protest actions, which clarified that Jerusalem is above and beyond all internal Palestinian contradictions. Further, we know that this spate of clashes was triggered by recent Israeli attacks on the al Aqsa mosque.

Despite the Fatah-Hamas division on the official level, unity amongst the various Palestinian parties was evident on the ground in recent days. Palestinians, especially the youth, are successfully working together during demonstrations and clashes on the ground, throughout the West Bank, Gaza and within Israel. A young Palestinian participating in Friday’s demonstration in Bethlehem told the media that “we are in unity against the Israeli occupation and the Palestinian official political divisions have nothing to do with us. It is shameful that many of our leaders are still living in a past in which such divisions mean something.”

Several Palestinian commentators are describing this current spate of clashes as a Youth Intifada, the uprising of the Palestinians born after the Oslo agreements. In this same vein some Israeli leaders have stated that Israel is now facing a Palestinian generation that does not know fear.

The recent wave of popular Palestinian protest activities, clashes and demonstrations have placed the Palestinian political parties in an embarrassing situation. After ten days of clashes led by Palestinian youth, new messages are being heard from some of the political parties. Ziyad Nakhala, the number two man in the Islamic Jihad party, stated that the party “will not stand with its hands tied when our people are being killed in the streets.” Hamas leader Ismael Haniyeh stated that Friday’s demonstrations in Gaza prove that all fronts are now open against the Israeli occupation.

Naef Hawatme, the secretary general of the Democratic Front for the Liberation of Palestine, told the al Mayadeen media outlet that we are currently witnessing the beginnings of the third intifada. “There will be no more authority without authority”, Hawatme said, alluding to the Palestinian Authority, “and no occupation without a price.”

On Thursday night the Palestinian political parties in the southern West Bank district of Hebron called on all Palestinians to take part in the clashes occurring throughout Palestine, and called for several protest activities in the coming days. Similarly, the national and Islamic parties called for a general strike next Tuesday, dubbing it a planned day of rage. Such a call is reminiscent of similar calls made during the first intifada.