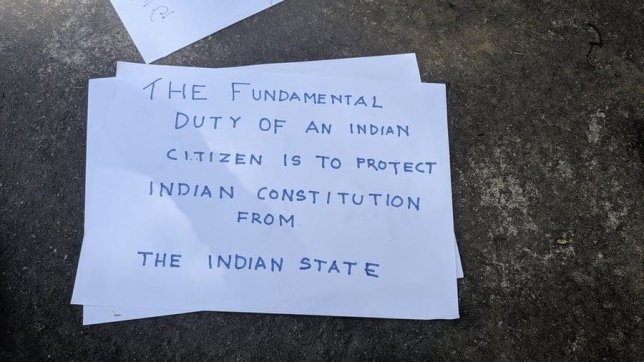 People’s Alliance for Democracy and Secularism (PADS) strongly condemns the Citizenship Amendment Act (CAA) passed by the Parliament on Dec 11,2019. Modi government used its brute majority to force it through the Parliament, without addressing any of the concerns raised against it. The law violates principle of secularism, which is part of the basic structure of the constitution. Parliament has no legal authority to change constitution’s basic structure. The Act discriminates against non-believers and Muslims, as they are the only ones left out its ambit. Apologists of the BJP regime argue that this law does not affect rights of existing citizens of India, that it will grant citizenship to only those Hindus, Sikhs, Christians, Parsis, Jains, and Buddhists who have migrated from Pakistan, Bangladesh and Afghanistan due to religious persecution in these countries, and are not yet citizens. However, since it makes religion based discrimination one of the conditions of citizenship in India, it violates the secularism of the constitution. It needs to be emphasised that even after the horrendous communal violence of the Partition in 1947, when millions of people had come to India from areas which formed Pakistan, Indian laws had treated anyone who had come to India equally, irrespective of their religion and belief. This is what had distinguished India from Pakistan, which was created with the explicit purpose of providing a homeland only to Muslims. This law follows the ‘two nation’s theory’ and accepts the RSS demand that India should be a homeland for Hindus, and Hindus only. Singling out Muslims is a clear signal that their faith makes them secondary citizens in India.

It is clear that diverse groups of people face political, ethnic, linguistic and religious persecution in all countries of South Asia. Residents of Kashmir valley have been under lock down ever since article 370 was read down in August. Their political leaders are arrested and normal life is paralysed. Sikhs were massacred in India in 1984 and had faced state led persecution during the Khailistan movement. Muslims had faced large scale killings during riotsin Mumbai in 1992 after the demolition of Babri Masjid, and in Gujrat in 2002. Christians, Hindus, Ahmidiyas have faced persecution under Shariat laws of Pakistan. Shias and Hazaras too have been facing violence at the hands of Islamic fundamentalists there. Civil wars in Sri Lanka and Afghanistan have led to large scale persecution of linguistic and religious minorities.Bangladeshi atheist bloggers like Avijit Roy and Ahmed Haider were killed by Islamic fundamentalists. Writer Taslima Nasreen who wrote against attacks on Hindus in Bangladesh was hounded out of the country. If people of India want to help persecuted people in its neighbourhood, then they must treat every persecuted person equally. It is against the basic values of humanity that one kind of persecution is de-valued in comparison to other persecutions.

The actual intention behind CAA comes out clearly when it is seen along with another pet project of BJP, the National Register of Citizens. The NRC will demand every Indian to prove to the government that they are Indians. Anyone who can not prove this to the satisfaction of the government will become a stateless subject, a human being without a country. As has happened with the NRC exercise in Assam, the most immediate victims of the NRC will be the poor of all communities; daily wagers, migrant workers, farmers and adivasis living in marginal lands, who will find it difficult to get necessary documentary proofs of their citizenship. In this group of vulnerable, the most vulnerable will be poor Muslims. Laws like the CAA will provide some relief to people of other faiths. Given the march of India towards a Hindu Rashtra under Modi regime, poor Muslims suffer most.

Protection to persecuted minorities in other countries is not at all the purpose of CAA.Nor is the purpose of NRC to provide a life of security to Indians. Their key aim is to keep the pot of communal politics boiling in India. The CAA and NRC are political and ideological projects of the RSS and the BJP. Their calculation is that the CAA will create and consolidate the vote bank of Bengali speaking Hindus in Assam and West Bengal who have migrated from Bangladesh, in its favour. The jingoist nationalism around NRC will be used to target minorities, and spread hatred against progressives and liberals who oppose any exercise meant to prove to the satisfaction of the government that all Indians living in the country are indeed Indians. A key tactic of fascist politics world over is to keep the society in turmoil so that by projecting the selected group of people as threats to the majority, the latter can be consolidated behind fascism. Ever since the BJP came to power under Modi in 2014, it has unleashed lynching mobs against Muslims and Dalits under the banner of cow protection. Students of JNU and others questioning government policies have been declared ‘anti-nationals’. Human rights activists fighting for the rights of Adivasis in central have been declared ‘urban-Naxals’.

The CAA and the threat of NRC has led to widespread protests all over the country. Modi and his minsters are trying to show to the so-called majority community that only people protesting against the CAA are Muslims. These are blatant lies. People of Assam are on streets because the CAA violates provisions of Assam Accord, which had brought a measure of peace to the state. Five people have lost life there in police firing. All political parties barring BJP’s allies have condemned the act. When students of Jamia Milia Islamia and Aligarh Muslim University protested against the CAA, police was unleashed on them The police fired teargas inside the Jamia library and attacked students studying there. It threatened women students inside their hostels. Two people are receiving treatment for bullet injuries. Police violence has galavanised students all over the country, and protests have been held in many universities. The humanity and bravery of our youth is exemplary. Viral videos of five young women students of Jamia who stood against lathi wielding policemen mercilessly beating one of their fellow students show the path to the future.