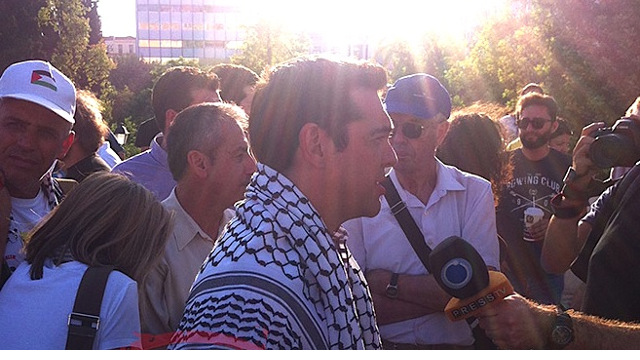 The strong OXO vote by the Greek people against European austerity and economic policies is not simply a stab at the EU economic system, but illustrates the contradictions between the needs of people and the policies of capitalism. It expresses people’s awareness of their needs, a shout that another world is possible. The world is possible, necessary, an utmost necessity.

This is a message to all the doubters concerning the ability of people to act and change. It’s a message that when leadership is present, a party open to change is present, that people say yes.

What occurred in Greece reflects numerous global facts, primarily that the neo-liberal capitalist system is in crisis.

The momentous change in Greece is crucial for Palestinians and other peoples struggling for freedom and justice. Greek Prime Minister Tsipras has stated that the “brutality Palestine is experiencing must end” and that Palestinians must receive their national rights. The BDS movement in Greece has also progressed forward since the January 2015 victory of Syriza in the national Greek elections.

Many Palestinians – and not only leftists – are pleased about the Greek vote against the capitalist system, a system that has traditionally supported Israeli policies. Palestinian leftists see Israel as being part of this global system, functioning as its policeman in the Middle East.

A lively discussion about developments in Greece has been taking place amongst Palestinian political activists on the various social networking platforms.

Fahmi Shaheen, a leader of the Palestinian People’s Party (PPP), stated that any defeat to the capitalist system, no matter where in the world, is a defeat of Israel. Khaled Abu Ghoul, a member of the Popular Front for the Liberation of Palestine (PFLP) leadership in Gaza, wrote that “this is a huge change, crucial for the Palestinian struggle on the international level.”