Home > English > NEWS AND ANALYSIS > More Cops? Not What Our Communities Need 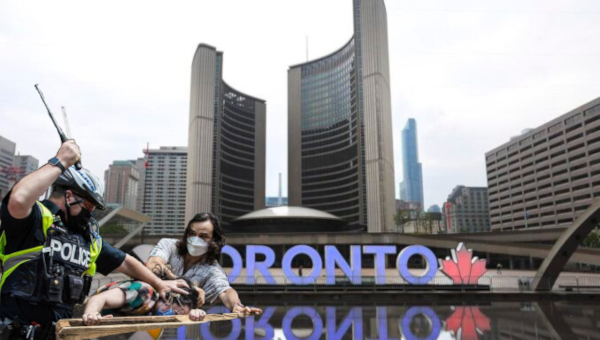 More Cops? Not What Our Communities Need

Listening to Chief Myron Demkiw’s pitch for the 2023 budget request to the Toronto Police Services Board (TPS), it sounded like the rationale for the budgets put together by school boards: the increased needs of population served, declining portion of the overall budget, inflation, plans to do more and so on. Except that school boards have been consistently cut over the past four years and the TPS just got support for an increase of $48.3-million to a total of $1.17-billion. Now it can hire 200 more cops.

You might think that a police force which had just released a report last June acknowledging systemic discrimination toward people who aren’t white – might want to concentrate on improving its act rather than adding more police. The Race and Identity Based Data Collection Strategy Report is worth reading, noting in one of its findings, that Black people were “over-represented” compared to their population by 1.6 times in use of force tactics by police, followed closely by East/Southeast Asian, Middle Eastern and Latinx people. No surprise – Indigenous people face more contact with police and are more likely to be strip-searched when arrested. Black people are more likely to have firearms drawn on them compared to white people in similar circumstances. It may not be news, but it’s significant that the TPS admits reality.

Why add 200 more cops? The TPS wants to reduce response time – a bit – though the budget presentation didn’t explain whether the 21 minutes it takes for a 9-1-1 call to get someone on the scene is because of lack of officers or a problem with management and communication. It also wants closer parity of police per 100 000 with other big cities like Chicago, LA and London, UK. It’s impossible to compare these situations given their different circumstance, but let’s look at Chicago, a similar-sized city to Toronto. Chicago had 492 cops per 100 000 people in 2021 against Toronto’s scant 167. Chicago also had 695 murders in 2022 vs 70 in Toronto. Conditions are different.

What about crime statistics? Major Crime Indicators (MCI), the metric the TPS uses to tabulate year by year crime reports, have come down a bit over the past few years. The roughest year was 2020 when MCIs reached 919 – mostly focused on assault and break/enter. This past year 779 of these indicators highlighted assault, break/enter along with vehicle theft. In 2018, Statistics Canada reported that Toronto had a lower violent crime rate at 818 per 100 000 residents than either Ontario as a whole, or the rest of Canada.

So far, there doesn’t seem to be a real urgency to add another 200 cops to the streets of Toronto, despite Mayor John Tory’s determination to do so. What about the world that exists outside the bubble of the Toronto Police Service?

Deputations to the TPS Board

Teachers out there might want to use this next part as an illustration of metaphor – giving a budget deputation in front of the TPS Board is certainly a study of power. You enter the stolid granite building at 40 College St – the TPS Board doesn’t receive the public at City Hall – so you know who’s in charge as soon as you enter the building and pass through security. The committee room is filled with senior level cops and there are two armed constables off in a corner, ready to react lest the barrier tape in the room proves insufficient to keep board members separate from the general public. From the get-go, this is not what you would call a congenial discussion – you’re there under sufferance.

But that didn’t stop all but a handful of the roughly 50 deputants to the Board from vigorously opposing the budget. Writer and activist Desmond Cole got things off to a start with a call for defunding and abolition of the TPS, reminding the Board that just over two months ago Tareesh Bobby Ramroop fell from his 16th floor apartment near Jane and Finch. He was in a mental health crisis, but was kept in his apartment away from contact with his family by Toronto’s Emergency Task Force after he threw some furniture off the balcony. “He didn’t need police,” said Mr. Cole, “He needed care.” Instead he was surrounded by a significant number of officers for hours “terrifying him until he tried to escape.” Police can’t handle crises like this; a picture provided by the Mr. Ramroop’s family show officers with a battering ram ready to take down the apartment door. “It’s the administration of death that happens in this place,” said Mr. Cole.

Huda Idrees, CEO of DOT Health argued that adding more police to the city just detracts from efforts that could be out into social supports for communities – when someone is in mental distress, “we don’t need a weaponized person there.” Miguel Avila-Velarde asked John Tory through the Board to do something different “put the interests of the poor first.” Jessica Sherman asked if the TPS would “give the money back” from the increase, once alternatives to armed force have been established as Chief Demkiw outlined. Lawyer Dave Shellnut outlined experiences of clients who faced police violence and anti-Black racism, notably a young Black woman who was profiled attacked and arrested after she attended a press conference about police violence. Rayna Slobodian asked “What prevents crime? Addressing poverty…provide properly funded housing, health care, schools, infrastructure, safe consumption sites, food clothing access, arts funding libraries and so much more.” And so it went for hours.

During all this time, only one Board member, Lily Cheng was curious enough to ask a question. The only response, other than admonishments from chair, Ainsworth Morgan, to be polite in the face of true power – was “next deputant.” Of all the dog and pony shows I’ve attended over the years – and there have been quite a few, this one wins the Academy of Silly Walks award for the most bizarre.

Many of the deputants claimed that community supports of all kinds, rather than laws and regulation actually reduce crime. Indeed, there are academic works supporting this. One in particular Safe Streets For Real People: A Case Study of Neoconservative Policy From a Structural Social Work Perspective by Élyse LeBlanc describes the situation right here in Ontario in which right wing ideology focused on personal responsibility and blame just keeps power in the hands of wealthy and bangs up against more socially democratic people who seek collective responsibility for those who don’t happen to have the means to do well in a world not constructed for them. Sounds a lot like the division between the police and most of the deputants at Monday’s meeting. Check below for other references.

What Else Could You Do With the Money?

Where else might that $48.3-million go? According to the City of Toronto 2021 Street Needs Assessment, a count done on April 21, 2021 – revealed 7 342 people who had no home, 742 of whom were living outside. Most of those people were Indigenous. A broader survey conducted in 2021 for the Homeless Hub showed a total of 18 096 people without a place they can call their own; 3 915 of them were considered to be chronically homeless. Homelessness is a grotesque tragedy in a city as wealthy as Toronto – but apparently not bad enough to attract money away from the Toronto police who will inevitably be called upon to clear the parks of people sleeping in tents who have no place to go.

What about feeding hungry people? Surely this is a basic human right that ought to be addressed ahead of hiring more cops? This year’s “Who’s Hungry?” report from the Daily Bread Food Bank lays it out plainly: there were 1.68 million visits food banks this past year – more than half the population of our city. That’s up 16% from 2021 when the total was 1.45 million and that number was up 47% from 2020. These numbers include many new visitors from working families facing huge increases in housing costs and food prices as grocery chains collect massive profits. These numbers also include increasing numbers of hungry children.

What about school communities? The Toronto District School Board (TDSB) is in dire need of help with suspensions related to violence in schools sharply on the rise. Three young people were murdered in or near TDSB secondary schools in 2022; two more were seriously injured. The Board wisely voted not to restart the School Resource Officer (SRO) programme that it cancelled in 2017 because so many racialized students were targeted by the programme and no argument supports arresting children rather than giving them support, guidance and safe schools to attend. Yet the TDSB has little left in its budget to deal with all these problems and says it just can’t carry the ball of community support on its own. It’s reaching out to the city-run SafeTO for help, but that budget is about $12-million in total.

Consider this example. If the TPS Board chose not to act like obsequious cronies and granted the police only half of their $48.3-million request, the city could hire 600 child and youth workers or 421 social workers or a combination of the two. This is based on average salary for child and youth workers at $40,000/year and for social workers $57,000/year. By the way, a beginning TPS constable (4th class) earns $75,218/year.

But they didn’t. Now we have a larger police force paid for out of a 2023 Toronto budget that is already $1.5-billion in the hole. Apparently, that’s alright for the fiscally conservative John Tory, who despite his reluctance to raise taxes, is willing to go to the wall on having more cops on our streets and probably using his new strong mayor powers to do so. The big picture here? You have dyed-in-the-wool neoliberals in Toronto and Queen’s Park who have participated in gutting city council and then taking power from it with strong and then stronger mayors who can block decisions and then get their own way with only a third of council’s support. The next logical step on this road to authoritarianism is a stronger police force. Expect more of the same in future.