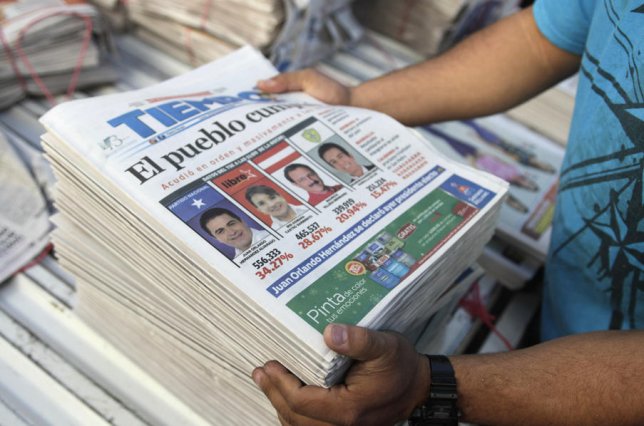 It said business as usual prevailed. Fraud, intimidation and vote buying were rampant. So were political assassinations. Democracy was nowhere in sight.

Honduras has none. Fascist extremism is official policy. A cauldron of violence and repression persist. Washington offers full support. It does so disgracefully.

State Department spokeswoman Jen Psake congratulated Honduras for a "peaceful" election. She lied saying so. She did again calling it "generally transparent."

Fascist police states don’t operate this way. They do what they please. They do it unaccountably. They steal elections with impunity.

Sunday was no exception. Election rigging substituted for freedom, openness and fairness. They were nowhere in sight.

They took a historic first step. They addressed dozens of Honduran hate crimes committed against LGBT activists. They include assassinations, beatings, humiliations, and numerous other human rights violations.

Honduras has the most homicides per capita worldwide. It’s unsafe to live there. It’s a breeding ground for human and civil rights violations.

Pepe Palacios heads the Honduran LGBT movement. He called Washington’s supported 2009 coup ousting Manuel Zelaya "our Stonewall. We are not going back."

On November 26, it issued a preliminary report. It’s based on firsthand observations.

Its representatives accompanied Hondurans "in their electoral process as they seek social justice in their country."

"(W)e find the presidential elections to be inconsistent with democratic principles and rife with fraudulent practices," it said.

"We were impressed with the peaceful behavior of voters, and in particular the voting participation of youth and senior peoples, despite the widespread voter intimidation tactics we witnessed."

It was "an expression of the international community’s high interest in the ’democratic’ process in Honduras."

It bears repeating. There is none. Jimmy Carter and other Center officials know it. They went along with the charade.

They "thank(ed) the Supreme Electoral Tribunal (TSE) for inviting them." They "congratulate(d) the people of Honduras for their peaceful and enthusiastic participation in the elections."

"It recognizes the effort of the Tribunal, the political parties, and the numerous national and international organizations that have supported the process and contributed to more inclusive and transparent elections than in the past."

"A number of parties have questioned one or more aspects of the process."

"The delegation believes that it is very important that the parties make their complaints known to the Supreme Electoral Tribunal in accordance with the procedures established by electoral law."

"It trusts that the Tribunal will resolve these challenges based on the established norms."

"It encourages all of the actors in the process to continue to work together to resolve electoral disputes in a peaceful and expedient manner for the good of the Honduran people and the newly elected officials."

"The Carter Center offers its support and collaboration to the people of Honduras to continue the strengthening of their political and electoral institutions."

Honduras’ is without question one of the world’s worst. Carter didn’t explain. Sunday’s voting wasn’t an election. It was a sham. It mocked legitimacy.

It was a predetermined process. The outcome was decided in advance. It was enforced through massive fraud, intimidation, vote buying and cold-blooded murder.

She was LIBRE party’s Cantarranas polling station president. On November 23, she was assassinated. She and Julio Ramon Araujo Maradiaga were murdered after leaving an electoral training session.

Many LiBRE supporters were prevented from voting. Others doing so got pre-marked ballots. They supported the National party.

Poll workers outside a Santa Rosa station were assaulted. Their credentials were stolen.

Its observers faced intimidation and harassment. Sunday’s result has no credibility whatever. What happened wasn’t an election. It was predetermined selection.

A detailed report is planned. A snapshot of what went on was as follows:

Their presence nationwide was hugely intimidating. LIBRE party supporters were targeted. So was free expression.

Electoral violations were rampant. As explained above, many voters got pre-marked ballots. They had no choice.

"The integrity and effectiveness of international election observation (was) severely compromised, said Stiehler." Detailed information will follow. One example reflects others.

An Olancho observer team "was followed by two vehicles without license plates immediately after leaving the polling station they were observing," Stiehler explained.

"After frantic and evasive driving from one of their accompaniers, the delegates succeeded in avoiding a confrontation."

At issue was intimidation. It was subverting democratic fairness. It was attempting to deny it entirely. On Sunday, it was nowhere in sight.

US ambassador Lisa Kubiske acted inappropriately. Despite numerous electoral irregularities, she "recognize(d) the announced results." She urged respecting the outcome before half the votes were counted.

She falsely claimed legal mechanisms exist to challenge results. Honduras has none. Rampant fraud and other irregularities can’t be contested.

"I don’t think I’m speaking out of turn in saying that the US is well aware of the violations that are happening here in Honduras."

"Despite the Leahy Law (and others prohibiting assistance to governments committing human rights abuses), the US continues to support and aid in increasing militarization in Honduras."

"It is also not off to say that the US had (its dirty) hand in this election."

"We believe that the only thing that will change US actions and narratives about this fraud and the massive human rights violations will be pressure, pressure, and more pressure from people like us."

The National Lawyers Groups sent a 17-member delegation to Honduras. On November 25, they issued the followingstatement:

"Honduras has a flawed electoral system with many deficiencies including control of the process by political parties, unregulated and undisclosed campaign financing, and inadequate resources, training and voting facilities that disadvantage poor communities."

"In addition Honduran electoral law provides for no run-off election."

"Without a runoff election in which a majority of voters choose leadership, the electoral aspirations of two-thirds of Honduran voters who voted for change, are frustrated, and the winner of a mere plurality is denied a real mandate."

"Yesterday’s election in Honduras and subsequent statements by the US Ambassador characterizing the election as ’transparent’ and accompanied by only few acts of violence are reminiscent of the 2009 election, where the US rushed to validate and help push forward a process as it was being contested by Honduran civil society."

"There must be an opportunity to do a full and accurate count and fully investigate reports of irregularities and intimidation and threats by authorities."

"Given the context of widespread opposition to the post-coup government and its violent repression of civil society, CCR urges the international community to do everything possible to ensure respect for and protection of Hondurans’ right to free expression, freedom of the press, and peaceful assembly in the coming days."

HSN and AGJ delegates were warned to go back. They were threatened. They were told they would "never leave" the area otherwise.

They ignored the threats. They pushed on by foot. They did so "nervously." They spent the night. They survived OK. They were lucky.

Honduran immigration agents targeted their Progreso delegations. They were harassed and threatened. They had to cancel planned training exercises. They could have been arrested or worse.

German, Salvadoran, Brazilian and other observers were treated the same way. Police states operate this way.

"The aforementioned observations made by HSN delegates were made in good faith by people who voluntarily served as witnesses to the entire electoral process."

"Given the extensive list of threats and violence before and during the election, and given the hourly revelations of discrepancies in the data on the vote tallies (Acts), and considering the fact that 20% of the votes are held by the TSE (Supreme Electoral Tribunal), the Honduras Solidarity Network cannot and will not in good conscience join in the rubber stamp endorsement of the results as they have been announced by the TSE."

"We continue to stand with the Honduran people in defense of their human rights and of their struggle to build a Honduras that provides a better life for everyone."

Stephen Lendman lives in Chicago. He can be reached at lendmanstephen@sbcglobal.net.