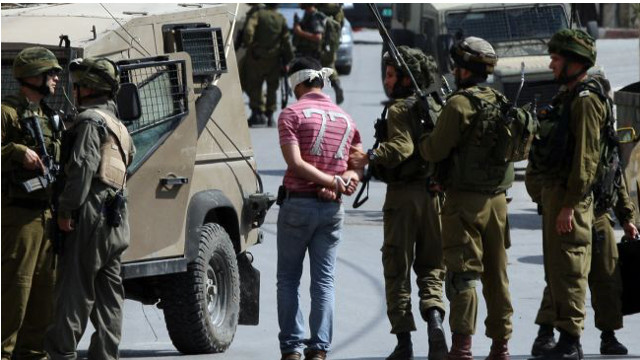 Israeli security officials have yet to confirm that three Israeli teenage settlers who went missing on Thursday night were in fact kidnapped. Regardless, the Israeli political and military leadership is exploiting the teens’ disappearance to crack down on Hamas and to undermine the newly formed PLO consensus government.

Over 40 Palestinians were arrested overnight Sunday, bringing the total to some 150 since early Friday.

Hamas members were also arrested in the city of Hebron and in the southern parts of Hebron district, as well as in the outskirts of Ramallah, Nablus and Jenin.

Three Palestinians were wounded in a raid on a house in Hebron when Israeli troops shoot a missile at its door. "We fired at the house and the two (wanted persons) immediately turned themselves in," an Israeli army spokesperson said, "A baby was lightly wounded and treated."

Residents of the Jalazone refugee camp near Ramallah clashed overnight with Israeli forces. Violent clashes were registered near Jenin as well. 20-year-old Jalazone resident Ahmad Sabarin was shot in the chest and died upon arrival to the hospital with two other wounded.

"We have one objective - find the three teens, bring them home, hit Hamas as hard as possible and move forward," Gantz told senior officers at the Central Command.

In addition, the Israeli government is looking into military, political and diplomatic moves that will restore the balance of power to that existing prior to the PLO-Hamas unity agreement.

The Israeli government was set to meet Monday to discuss the possibility of exiling Hamas leaders, including administrative detainees currently on hunger strike, from the West Bank to the Gaza Strip.

A senior government official said Monday morning to Ynet, an Israeli news portal, that "this option is being examined by the attorney general.” “We want to deport a few officials to Gaza, including those in administrative detention on hunger strike," the official said.

"We are looking ahead at increasing the activity against Hamas, with an emphasis on the Hebron area, but this activity begins in the northern Samaria. The closure in the southern West Bank continues," a senior military official said to the Israeli press.

Overnight the Israeli air force struck five locations at the Gaza Strip. No casualties were reported.