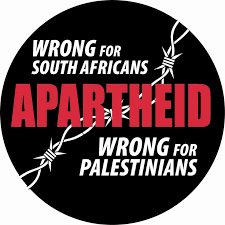 Israel’s New Law is a Form of Apartheid

The Israeli nationality law is now a fact. Its full name is “Israel, the nation state of the Jewish people”. It states that Eretz Israel (historical Palestine) is the homeland of the Jewish people and that the state of Israel is the nation state of the Jewish people. Furthermore, only the Jews have the right to self-determination in Israel. Hebrew is the only official language (until now Arabic was also an official language) and Arabic has a special status, which is undefined in the text of the law. The law defines future Jewish settlement, which some would call colonisation, in historical Eretz Israel (Israel and the occupied territories) as of supreme national value and vision. It grants religious and national communities the right to maintain a segregated habitat in the state (namely, the practice of having exclusive villages and towns for Jews). These are the main points of the new law.

A closer deconstruction of this document reveals why this law changes the nature of Israel and, more importantly, why it is ominous as far as the Palestinians are concerned. First, this law denies the fact that within the state of Israel, and indeed within what is called Eretz Israel, there are two national movements. This total denial of the Palestinians’ right to Palestine as a future vision has to be seen in the wider context of the historical circumstances in which Israel was born in 1948. Zionism was a settler colonial movement and Israel is a settler state. This means that Jewish colonisation and the oppression of the Palestinians is on par with the European destruction of the native Americans or of the genocide of the aboriginals by the Australians. The difference is in the historical timing: the Zionist settler colonial project is an unfinished historical episode, as is the Palestinian resistance to it. The project has been quite successful: in 1948, Israeli ethnically cleansed half of Palestine’s population and took over 78% of the land. The Palestinian minority left under its control was put under a harsh military rule on the basis of British colonialist practices.

This same regime was imposed later on the Palestinians in the West Bank and the Gaza Strip which Israel occupied in 1967. After the 1967 war, Israel stretched over the whole of historical Palestine, but still ruled millions of Palestinians despite its “success” in turning millions of them into refugees over the years. The so-called peace process that ensued after 1967 from an Israeli point of view was meant to find the best way of having as much of historical Palestine with as few Palestinians in it as possible. This is not an easy task in our times as it had been during the days of colonialism and imperialism — partly because of international sensitivity about ethnic cleansing and mainly due to Palestinian steadfastness. Even the most forthcoming Palestinian leaders and movements could not accept the best solution that Israel had to offer for the tension between the Jewish state’s territorial ambition and its demographic concerns. The two-state solution offered by some as a basis for peace is meant to allow Israel total territorial control over autonomous Palestinian Bantustans that could be called a state. The intentional community may support this formula, but Palestinians cannot and will not accept it.

The nationality law in many ways is an attempt for a new approach. It is part of a strategy that was born out of the failure of the charade of two states offered by Israel and the search for a new method for implementing the settler state’s vision. The architect of this strategy that can be called “unilateralism” is the former Israeli Prime Minister, Ariel Sharon. Its logic is that there is no need to negotiate with the Palestinians over the future, there is a need to decide what part of historical Palestine should be annexed to Israel and what parts can be ruled from the outside. The first step in 2006 was to enclave the Gaza Strip and take out the Jewish settlers from there (Sharon did not anticipate that Hamas would take over the evicted Strip, but nobody in Israel wants to go back and rule Gaza directly). The “unilateralists”, who are the vast majority of the Israeli policymakers today, do not wish to control directly the densely populated area A (the area designated under the Oslo Accord as being part of the Palestinian authority exclusive rule), which constitutes less than 40% of the West Bank. The rest of the 60% of the West Bank and pre-1967 Israel is now the Jewish state. Parts of it still have to be officially annexed to Israel, but this will probably happen in the near future.

The nationality law defines clearly how Israel will deal with the millions of Palestinians under its direct rule. They will be citizens who will be tolerated only if they deny their national identity and the historical narrative. Despite the fact that they are the original and indigenous inhabitants of this country, they will be officially second-rate citizens under an apartheid system that will not allow them to live in exclusive Jewish communities or have the same state benefits, access to land, and freedom of movement and association as the Jewish citizens. Thus, the limitation of freedom and rights articulated in the new nationality law are guiding future governments not only in their attitude towards those who are today Palestinian citizens of Israel, but also those who might find themselves under such a category when other Palestinian areas are annexed to Israel.

If any of these limitations, indeed if even one of them, had been imposed on Jewish citizens anywhere in the world, Israel and its supporters worldwide would have cried out that the worst kind of anti-Semitism had returned. Racism exists everywhere, of course, but institutionalised racism has been erased from almost everywhere in the world. The last triumphant battle against such racism took place in South Africa. It is no wonder that South Africa at the time of apartheid had strong and excellent ties with Israel.

The world must react

India recently strengthened its ties with Israel. The nationality law should remind Indian politicians who their new bedfellows are. For those of us who struggle for justice and equality in Palestine, India symbolised the way forward in its anti-colonialist liberation campaign and its resistance in being drawn into Cold War imperialist politics. Tolerating a new apartheid state in West Asia, with international and particularly Western immunity, will not help the Arab world get out of the horrific bloodshed that it experiences these days. Such international support for racism in historical Palestine is only going to add fuel to the fire that we are all trying to extinguish. The nature of that racism may have been hard to detect in the past or from a distance, but today it has unfolded in all its inhumanity and ugliness and anyone with a modicum of decency should not stand by it. The world has helped to abolish one kind of apartheid and it can do it again.

Ilan Pappe is a Professor of History, Director of the European Centre for Palestine Studies, University of Exeter, U.K.