Home > English > NEWS AND ANALYSIS > In Baghdad, the Social Forum Regains its Relevance 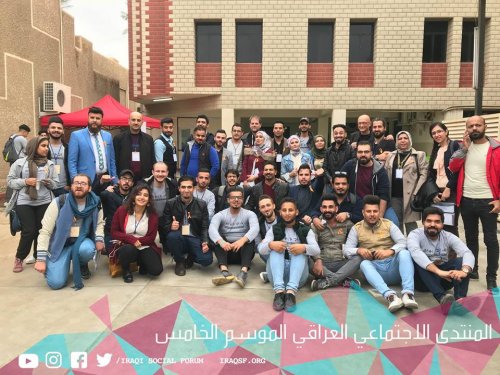 In Baghdad, the Social Forum Regains its Relevance

Last November 22nd to the 25th, I had the opportunity to participate in a little known event (at least in the North!) in Baghdad. A meeting bringing together activists of various faiths, from eleven Iraqi cities, organized around eight themes and articulating daily struggles towards social justice. This event, extraordinary by itself, but even more so in a country going through post-war trauma and conflicts, was the Iraqi Social Forum (“ISF”). The main lesson I learned is that the ISF is without a doubt one of the most mature and worthwhile models of a National Social Forum.

I want to share three observations. From these I drew lessons which can be highly relevant for the construction and success of national social forums elsewhere:

Observation 1: A two-layered structure, allowing both geographic and thematic involvement

This years was the fifth edition of the Iraqi Social Forum . Its open, "two-layers" structure, one geographical and the other thematic, are allowing broad involvement of just about every movement and organization at the level it wants.

Eleven municipal social forums constitute the geographical participation layer. At this level, grassroots organizations can mobilize with groups active in their cities or region (on a wide array of issues) or choose to coordinate with these local actors to bring their specific municipal/regional visions into the national process.

Organizations can also choose to involve themselves into one of the eight thematic “paths” (issues based platforms of organizations within the ISF), where groups are developing issues based joint action plans. Those eight paths are:

At this level, the convergence of action is not just local or regional, but rather aims at national integration of all stakeholder organizations in the thematic issue. Groups and movements are not only seeking a better convergence with the other movements on the thematic issues, but above all, they wish to deploy together a new program of activities. For example, to do advocacy work with the various government institutions pushing for changes to legislations according to the demands of civil society.

The event of this past November was not understood by its participants as an end goal . Quite the contrary, the three day event was understood as a moment – a season - that comes back every year in order to bring all social movements together while the others seasons of the year are dedicated to movements, local forums, and thematic paths working to come into action.

Organizations involved on thematic issues meet monthly and develop yearly-specific action plans. Each of the municipal forums also have their own processes and the national forum in this context is just what it needs to be; an annual step to pool all of this.

It remains important, of course, for this Iraqi Social Forum to be held every year but the emphasis is on the very existence of a functioning two-layer structure as the real result of the process.

In this context, it is clear that the ISF is not so much a "mainstream" activity looking to harness wide support but rather a meeting of representatives of different organizations involved in the different movements articulated around different priorities.

Observation 3: The ISF, 12 months a year

National Social Forums often feature their own programming, but rarely endorse civil society initiatives after the event. Continuity is often the problem. The ISF has the particularity of actively working for social movements by endorsing all year long a wide array of meetings, actions, and spaces. The result is a cohesive approach to movement building that forces constant traction. The ISF is not one big important annual event, but a year long process that touches base nationally once a year.

Concrete examples include ISF initiatives to organize around participatory budget, campaign for a fair representation of women in government institutions, or another to save the Tigris River. On November 30, the ISF organized its annual Peace Marathon in Baghdad, which brought together thousands of young and old runners for peace.

The vision of a proactive ISF connected to its grassroots base responds to the important question of the political relevance of its processes specifically, and maybe, the political relevance of social forums more globally. The ISF, contrary to a sense of irrelevance that some Social Forums bereft of visions have left us with, appears for all the groups involved as well as other observers, as a process with a tangible added value for civil society groups. Therein lies the movement building of a united, driven and engaging civil society.

What is interesting here is that there is no conclusion. The Iraqi Social Forum still has a lot to achieve.

But these three observations that might appear oversimplified are nonetheless crucial for they are allowing the event and its process not to be built towards a short-term goal but rather as a process in full growth and which still has much to give to the Iraqi civil society and more generally to Iraq.

I can only hope that other civil society groups working at national level in different parts of the world will take inspiration from the Iraqi Social Forum when it comes time to organize their own processes.