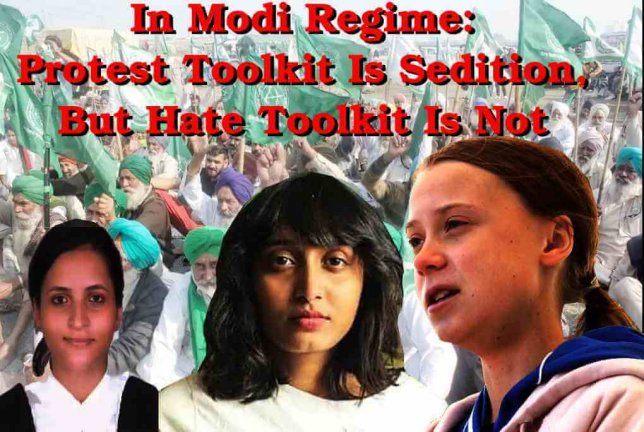 Impact of the Farmers Agitation on India’s International Image

India’s current image in most of the mainstream western media is that of an authoritarian state: a state unwilling to tolerate any dissent or criticism of its actions and policies; a state that harasses, persecutes, and imprisons critics who voice opinions or sentiments the government dubs as “sedition” - under a century-old law left over from the British colonial regime.

This image has been in the making for the last few years particularly after the erasure of the statehood of Jammu & Kashmir [J&K state] in August 2019. It was reinforced by the crushing of the democratic, peaceful, non-violent, satyagraha-style-struggle carried out by minorities, mainly Muslims, and democratic rights activists against the Citizenship Amendment Act and related laws from mid-December 2019 through February 2020. But it is the reaction of the Modi regime to the widespread peaceful farmers’ protests calling for the repeal of the pro-business farm laws passed last September that has solidified this image not only in the print and audio-visual media but also in the minds of those who follow what happens in the world and comment about it on social media.

In particular, the supercilious and angry response of the Indian government and its “patriotic” supporters to critical comments by international celebrities such as singers and actors as well as environmental and human rights activists on the way the regime has dealt with the farmers protests has further cemented the undemocratic and authoritarian image that India currently presents to the world.

An editorial in the Hindu newspaper of February 5, 2021 stated “The best way for the government to avoid international criticism is not to allow more people to see it as authoritarian, disrespectful of rights, and given to attempts to undermine institutions of democracy.” But going by Modi’s recent speech in the Rajya Sabha decrying the farmers agitation as akin to “andolan jeevi” (lifestyle of professional protestors), it seems unlikely that he will accept this advice.

The superstar-singer Rihanna is a United Nations Global Partnership for Education (GPE) Global Ambassador who often uses social media to highlight important world issues such as global poverty. She simply tweeted a CNN report about the protest by Indian farmers asking “Why aren’t we talking about this?” adding the hashtag #FarmersProtest to her tweet. The CNN news report had detailed the repressive measures taken by the government at the Haryana-Delhi border to prevent the farmers from entering Delhi. This included the laying of trenches and barricades at the border in the manner of a medieval feudal lord hastily erecting walls and digging a moat to stop enraged peasants from invading his castle. Moreover, the government banned the Internet at the protest sites, forcibly prevented journalists from reaching there and turned off access to water and electricity to force farmers to vacate the camps set up in the vicinity of the border crossings.

The well-known teenage environmental climate change activist Greta Thunberg tweeted a compendium of information, dubbed a ‘toolkit’, about the farmers protests that provided materials to those who wished to add their own voices to the farmers’ protests. For some reason, this file of readily available information threw Prime Minister Modi, Hindutva trolls as well as the Delhi police into a frenzy who viewed the “toolkit” as something sinister.

The Delhi Police, in fact, filed a first information report or FIR (in the Indian legal system a prelude to filing charges for arrest) against Thunberg’s toolkit deeming it to be the work of Khalistanis, i.e., separatists from the Sikh community. Hindutva cyberwarriors characterized the “toolkit” in ominous terms as “subversive” as if it was some secret plot instead of information readily available from newspapers and magazines and other media covering the protests. Meanwhile the police upped the ante by claiming that those who created the so-called tool kits intended to “create disharmony among various social, religious and cultural groups and encourage disaffection and ill-will against the Government of India.”

The absurdity of linking the name of a teenage climate activist like Greta Thunberg, internationally famous for her campaign against global warming and often mentioned as a candidate for the Nobel Peace Prize, to an attempt to foster ill-will against the Indian government does not seem to have entered the minds of the establishment.

Oscar-winning Hollywood film star and activist Susan Sarandon joined the global fraternity supporting the farmers’ protest by tweeting: “Standing in solidarity with farmers protest in India. Read about who they are and why they are protesting below.” Other celebrities like the Hollywood actor John Cusack, and the Lebanese-American model Mia Khalifa, among others, made similar comments.

The US Vice-President Kamala Harris’s niece, Meena Harris, herself of Indian origin and a lawyer and social activist, went further in extending her support to the ongoing farmers’ agitation, through a series of tweets. As reported in The Wire news portal, she said: “This isn’t just about agricultural policy. It’s also about the persecution of a vocal religious minority. It’s police violence, militant nationalism, and attacks on labor rights. It’s global authoritarianism. Don’t tell me to stay out of your affairs. These are all of our issues.” Her refusal to be intimidated or silenced was displayed in her reaction to images of her portrait and that of Thunberg being burnt by a Hindutva mob calling itself the United Hindu Front when she tweeted “I spoke out in support of human rights for Indian farmers and look at the response.” As a labor lawyer, Meena Harris also focused attention on the arrest and alleged sexual assault in custody by Haryana police on a 23-year-old Dalit woman and trades union activist Navdeep Kaur. She was arrested on January 12 in Haryana at the site of one of the farmers protest camps and, according to her lawyer, foisted with fabricated assault charges stemming from her work at a factory in Karnal.

Harris’s concern was echoed by British Labour Party MP Tanmanjeet Singh Dhesi who was quoted by The Tribune newspaper as saying "Alarmed to learn of sexual assault and torture allegations in police custody of Punjabi trade unionist Nodeep Kaur, who after four weeks hasn’t even been granted bail." Dhesi was also reported to have said that “the abuse of peaceful protest activists, especially women, is an affront to democracy and civilized society” and he sent a letter, signed by over 100 MPs and members of the House of Lords, to UK Prime Minister Boris Johnson on the ongoing farmers’ protests, asking him to raise this matter with his Indian counterpart Narendra Modi.

In another official response, the India-Caucus in the House of Representatives of the US Congress urged the Indian government to allow peaceful protests by farmers and provide them with access to the internet and journalists. Its chair, Rep. Brad Sherman, urged the Indian government to make sure that the norms of democracy are maintained, that protestors are allowed to protest peaceably and to have access to the internet, and to journalists.

In a letter addressed to the Canadian foreign minister Marc Garneau, six Canadian MPs urged him to speak to his Indian counterpart over the farmers’ protests in India. On February 10, 2021, The Wire reported that the letter stated “Recently, internet, electricity and water supply has been cut off at the protest sites where farmer protesters have been sleeping outside in the cold for over two months. More than 200 of these farmer protesters have died. The protest sites have been barricaded, media presence controlled, and recently two journalists were arrested at the protest sites.” The MP’s letter reminded the Canadian foreign minister “your role is to advance Canada’s interests, including democracy and human rights in the world, and to address fundamental global challenges. This is a global challenge to democracy, and citizens of India …are concerned about the right to peaceful protest.”

Meanwhile, the Indian Government’s Ministry of External Affairs issued a response to the tweets of the celebrities calling them “neither accurate nor responsible” and advised them to ascertain facts and properly understand the issues at hand “before rushing to comment on such matters”. Liberal commentators in Indian newspapers dubbed this response of the government as “supercilious” and “highly sanctimonious” and said it “smacked of paranoia.” After all what are the limits on non-Indian citizens criticizing events and developments in India? Doesn’t the Indian regime express its views on events in other countries such as the assault on the US Capitol on January 6, 2021 or the recent military coup in Myanmar that do not directly concern Indian interests? Isn’t it rank hypocrisy then to cast aspersions on outsiders who are pointing out the motes in Indian eyes?

Further fuel was added to this fire when assorted Indian actors, sports celebrities such as cricketers, and various hyper patriots put out a series of suspiciously orchestrated tweets objecting to “external interference” in India’s internal affairs. The almost identical wording of these tweets suggested their origin in a common source, very likely the headquarters of the BJP trolls.

On February 7, in election rallies in the poll-bound states of West Bengal and Assam, Modi attacked what he termed ‘international conspirators’ who in his words were discrediting and defaming India. While he did not mention specific names his reference to the ‘toolkit’ left no doubt that he was referring to the various international celebrities, in particular Greta Thunberg and her followers in India such as the climate activist Disha Ravi. Modi’s threat in these speeches that India would deal firmly with these conspiracies with ‘all its might’ no doubt sent a signal to the Delhi Police. Less than a week after Modi spoke the young 22-year-old climate activist Disha Ravi, a follower of Thunberg, was arrested by the Delhi police from her home town Bangalore and taken in custody to Delhi. She was jailed for almost a week before a judge cast doubt on the police version of events and released Ravi on bail pending trial.

In linking the police charges against Ravi with Modi’s speeches The Wire news portal published an analysis on February 25 that asked “on what basis did the prime minister allege that there was an international conspiracy? Did the Intelligence Bureau (IB) or the Research and Analysis Wing (R&AW) give him an intelligence report, which is not available in the public domain?” Since the police routinely supply such reports to the judge in sealed cover to deny bail to the accused and Ravi received bail it is likely no such intelligence report exists. In that case, Modi’s threats were fabrications for electoral purposes to discredit and destroy the farmers movement by blaming unknown international conspirators. Such accusations, however, could lead to a long jail term for the young accused Ravi barely in her twenties whose only guilt is an idealistic belief in the need for action on climate change.

The Wire also indicated “this is not the first time Modi has used an election campaign to allege the existence of an international plot to destabilise his government. In December 2017, he told an election rally in Gujarat that former prime minister Manmohan Singh, former vice president Hamid Ansari and Congress leader Mani Shankar Aiyar had held a ‘secret meeting’ with Pakistani officials.”

Modi often boasts about India being a Vishwa-guru (the world’s guru) under his leadership. But the way his government has reacted to Rihanna, Greta Thunberg, and other celebrities is hardly that of a guru, Vishwa or otherwise, it is more on the lines of a politician blaming imaginary “foreign conspirators” for his own government’s follies.