Home > English > NEWS AND ANALYSIS > How Low Can a Country Go? 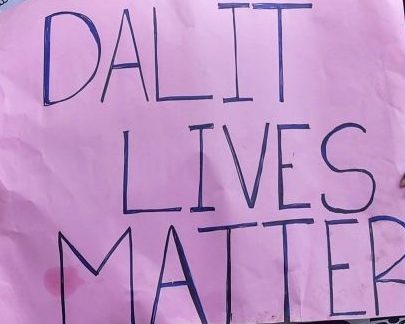 How Low Can a Country Go?

How low can the country go? To what moral depths can the “world’s largest democracy” descend? These questions emerge naturally in the aftermath of two horrific events: the rape and killing of a young Dalit woman in Hathras, UP and its cover up by the state police as well as the arrest of an 83-year old priest Father Stan Swamy on charges so preposterous they strain credulity.

These questions are not directed at the authorities: the perpetrators of these atrocious acts that can only be labelled as a species of “bureaucratic terrorism” and of which they are undoubtedly fully aware. Rather they are aimed at the general public that, with a few honorable exceptions, has remained largely indifferent to these actions; the horrors being visited on the minorities and the marginalized and those who dare to dissent in their midst.

The Hathras case has been covered extensively in the news media. A 19-year old Dalit woman was savagely raped and assaulted by four upper caste Thakur men in her village. She was discovered naked and bleeding by her mother in a field owned by her upper caste neighbors with her spine broken, bleeding from her neck and vagina, her tongue cut and protruding and her eyes bulging. She was taken to a police station where she was treated callously, no doubt due to her caste status, before being moved to a hospital in Aligarh for several days and then, hurriedly, to Safdarjung hospital in Delhi where she died two weeks after being attacked. Despite providing a clear declaration of rape and assault and the names of her assailants to the police, astonishingly, no test for rape was performed until 11 days after the attack when any physical evidence of semen would have disappeared.

The initial story was horrific enough but what has happened after her death is much worse. The UP police claimed the girl’s body from the hospital in Delhi and brought it back to Hathras where they refused to release it to her family or even let them view it despite her mother’s pleading. Instead, in a complete travesty of the usual religious rite of cremation, the cops burnt her body in an open field in the dead of night disallowing the presence of any family member. A few days later, high UP police officials began to cast doubt on the rape due to lack of “forensic evidence” disregarding the serious lapses in their own investigation as well as her dying declaration. Moreover, the district magistrate of the area tried to convince the dead girl’s family to drop their pursuit of the case because they would have to continue to live in that area while the media would disappear in a few weeks. These actions of the authorities seem to flow directly from their apex, UP Chief Minister Yogi Adityanath, who is also in-charge of the police and an upper-caste Thakur to boot. While his caste origin and his toxic masculinity may provide some of the underlying reasons for the actions of his administration, the uniquely horrifying nature of the events has led him to concoct another explanation. In his view, it all happened because of an “international conspiracy” to defame the UP government. This claim is basically straight from the Nazi playbook although it is also resorted to by other authoritarian leaders. But the silence of the majority, apart from a few honorable exceptions, is also something from the Nazi era.

The other event is the arrest and jailing of an 83-year old priest in Jharkhand, Father Stan Swamy, who has devoted his life to serving the Adivasis of the area, among the most marginalized and poorest people in that region. While many of them are traditionally forest people, they have been ousted from their lands by large corporations carrying out extractive mining for coal and other minerals who are also destroying the ecology of the area and the environment. Swamy’s work has attracted the ire of the authorities who see him as an obstacle to what they consider “development”. So, he has been ironically labelled as a Maoist, then linked to the Bhima-Koregaon case in distant Maharashtra, a place he has never seen, and imprisoned under draconian charges. His main “guilt” to the authorities is that he has roused Adivasis and Dalits to mass non-violent protest against the actions of the state, hence he is anti-government and by association anti-national.

Fr Swamy has joined 14-15 other persons in jail in the same case, one of them also an octogenarian and several others in their 60s and 70s who have been in jail for more than two years, all of them held under a panoply of fanciful charges, the most extreme being a plot to assassinate the Prime Minister. The veracity of the charges hardly matters as the prospect of their trial actually beginning is still uncertain. In fact, it is the process itself that is the punishment. Given their age and age-related health problems, not to speak of the severity of the covid-19 pandemic in the Indian prison system, it is quite possible that some of the imprisoned could pass away before trial.

Apart from the protest petitions filed by a handful of academics and civil and human rights activists, Stan Swamy’s ordeal or the travails of his co-accused jailed in the same case have been mostly ignored by the public just like the horrific aftermath of the rape and murder of the Dalit woman in UP. Part of this could be fear and intimidation induced by the government’s actions in squelching the widespread opposition to the Citizenship Amendment Act and putting hundreds of those who protested in jail.

But a more likely reason is the majoritarian impulse this Hindu-nationalist regime has evoked in many sections of the Indian population and in the media, especially social media. This majoritarian sentiment excuses or applauds enthusiastically the worst excesses of the storm troopers and the many trolls and Modi-bhakts who indulge in mob lynching of hapless Muslims or Dalits, harass and assault inter-faith couples under the pretext of love jihad, and abusively attack all those who try to defend the constitutionally mandated secular and democratic character of the Indian state.

The intellectual and organizational fathers of those currently in power, the founders of the Rashtriya Swayamsevak Sangh or RSS, like Guru Golwalkar and B.S. Moonje were staunch admirers of the European fascist regimes, Nazi Germany and fascist Italy, of the 1930s and early 1940s. While their successors, the current rulers of the country, may not like to mention those regimes that inspired Golwalkar, it is undeniable that the majoritarian mindset that is willing to condone almost any horror perpetrated by those they hero worship and which is being manifested on a wide scale in India echoes the mindset of the majority of Germans who were complicit in the extreme brutalities against minorities and anti-fascists in their countries culminating in the genocide of the Jews.

Two quotations below illustrate what this majoritarian mindset signified in the overwrought political climate of fascist Germany:

“The consent which the people accorded the regime, however, and which found expression in the Fuhrer myth…was more than merely implicated in the use of terror: terror…met with popular approval. The terror, directed against political or social ‘trouble-makers’, was not only not concealed from the population…but was highly visible, was documented in the press…was given legitimacy in the speeches of the Reich’s leaders and was approved and welcomed by many Germans…” (Detlev J.K. Peukert, Inside Nazi Germany, Yale University Press, 1987).

William J. Shirer, the author of “The Rise and Fall of the Third Reich” writes of listening to a speech by Hitler in 1934: “’We are strong and will get stronger,’ Hitler shouted at them through the microphone…And there in the floodlit night, massed together like sardines, the little men of Germany who have made Naziism possible achieved the highest state of being the Germanic man: the shedding of the individual souls and minds – with the personal responsibilities and doubts and problems – until under the mystic lights at the sound of the magic words of the Austrian [i.e. Hitler] they were merged completely in the Germanic herd.”

Can one detect here any resemblance to the mindset of the Hindutva herd enthralled by the speeches of Modi or of Shah lambasting the “termites” who have infiltrated the country?