Home > English > NEWS AND ANALYSIS > François Houtart Has Passed Away 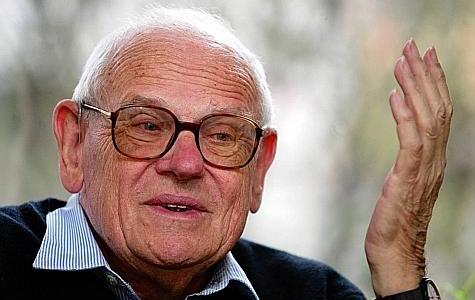 François Houtart Has Passed Away

François Houtart has passed away. He founded CETRI (Centre Tricontinental) in 1976 and was its director till 2004. We are sadly, painfully mourning. From ‘third-worldism’ to alter-globalism, from liberation theology to the ecology of creation, François Houtart has been and will always remain an important thinker in favour of the emancipation of peoples. He was a reference, a voice and a heart for hundreds of thousands of people all over the world, more particularly in Asia, Africa and Latin America, from heads of State to the most humble of landless peasants.

Better than any list of all his work, his articles, his speeches, his lectures and conferences, his trips, his qualifications, rewards and recognitions, François Houtart is best remembered for his personal qualities. Most of all, his stubbornness, his energy and his availability.

He stubbornly and systematically was on the side of the oppressed, the alienated, the marginalized. He scientifically and politically shed light on the mechanisms of domination, denouncing them and promoting alternatives for an environment-friendly egalitarian social organisation.

His never flinching energy, his untiring enthusiasm were characteristic. It is an understatement to say he never stopped working, he never counted the hours. Never ever did he stop acting, till just a couple of hours before the end … for the very first time.

His availability was endless, his accessibility proverbial. Never disturbed, always ready to welcome, to listen, to speak, to commit himself in some new initiative, in a new fight for more justice.

François also was the – sociological – conscience of the pregnancy of social relationships, of social determinants which made him humble and lucid concerning his own trajectory. ‘If I were born in a poor family in India, Mali or Nicaragua, I would never have had the social, cultural, symbolic resources that paved my way’. This is what he said to those who were close to him, at an anniversary some years ago. Yet, the choice was his, better than anyone else he chose the way of condemning injustice and promoting the liberation of the oppressed.

I thought you were immortal, indestructible. I saw you already at one hundred years old, this is what I hoped, and I was sure it would come true. It took me several hours and several messages of confirmation to really believe you passed away. Qué pena ! Your immense light of hope for the world was dimmed. For me, you have been the most human of human beings I ever knew. No one will ever convince me that you did not die of exhaustion. You were fighting and spending all your energy to relieve the misery of others, to protect the damned of the earth from the cruelty and the egoism of their likes. Always listening, always working, always in solidarity with the oppressed, in all corners of the world. Your commitment has been for half a century the example that I obviously was never able to follow, though it has always inspired me and given me courage. I thank you for this and I promise I will always follow the road you have shown us, as best as I can, for the time allotted to me before I will join you.