Home > English > NEWS AND ANALYSIS > Farmers And Others 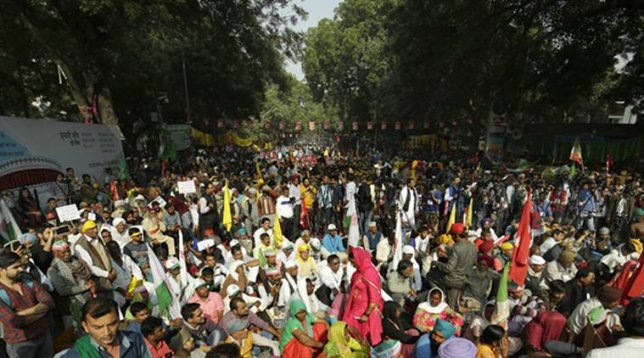 Will the kisan take care of interests of landless peasants as well?

In the aftermath of the demonstrations by farmers in the name of agricultural prices and loan waiving, it is important to remember that village India also comprises of landless peasants who have nothing to sell on the market and have never gone to a bank. Their condition has deteriorated, too, as a result not only of the agricultural crisis affecting the farmers, their employers, but also of the fate of the Mahatma Gandhi National Rural Employment Guarantee Act (MGNREGA) that UPA 1 initiated in 2005.

The recent “Delhi chalo” movement calls to mind the peasant politics of the 1970s-’80s, when the farmers that Professors Susanne and Lloyd Rudolph called “bullock capitalists”, claimed to represent all kisans. In contrast to the “tractor capitalists” who owned more than 15 acres large holdings, the “bullock capitalists” owned only 2.5 to 15 acres, but that was sufficient to have something to sell and to prosper. Their good fortune was partly due to their sense of organisation and their capacity of mobilisation — that became evident in 1978 when hundreds of thousands of them came to Delhi to celebrate the birthday of their main leader, Charan Singh. This strength allowed them to obtain from the state remunerative prices for agricultural commodities and subsidies (regarding fertilisers and electricity, for instance).

Such strength came from the fact that they were able to subsume class politics in rural India and rally other sections of society. Charan Singh emphasised the opposition between the urban and the rural, between “India” and “Bharat”, as if they formed two blocks, sidelining social differentiations in terms of caste and class within village India. Singh claimed that he was representing all the “kisans”. He paid no attention to the landless labourers who worked in the fields of others. In that sense, “the new agrarianism” which emerged in the 1960-’70s was a form of populism, as DN Dhanagare argued convincingly. This brand of populism continued to prevail under the aegis of the Bharatiya Kisan Union and culminated in 1989 when peasants camped in Delhi for days.

However, it was already more and more difficult to get benefits for the peasants. Since the 1990s, partly because of economic liberalisation, subsidies have declined and farmers have lost out to urban India — hence their recent mobilisations. But the losers are not the “bullock capitalists” only. At the receiving end, are also the landless peasants, who number about 300 million. No mainstream party ever considered land redistribution to be a solution to landlessness. Lately, industrialisation has been presented as the most promising way forward. Supporting the BJP’s amendments to the Land Acquisition Act, Arun Jaitley declared in 2015 that this reform would result in “industrial corridors” thanks to which “300 million landless people would get employment opportunities.” This tall order has clear implications for village India. In the first place, if the landless peasants have to leave their village, there is no need to help them to live there. Hence the fate of the MGNREGA.

The MGNREGA was one of the most ambitious attempts at fighting mass poverty in post-Independence India — it consisted in paying 100 days of minimum wages to any rural family affected by joblessness. Under Manmohan Singh, the state devoted large amounts of money to the MGNREGA, which represented upto 0.6 per cent of the Indian GDP. Not only did this programme directly benefit millions of poor, it also indirectly helped an even larger number by pushing up the rural minimum salary which increased from Rs 65 a day in 2005 to Rs 162 a day. The average growth rate of rural revenue jumped from 2.7 per cent per year in 1999-2004 to 9.7 per cent in 2006-2011.

This is one of the reasons why the BJP appears to consider the MGNREGA not good for the country, because it increased the cost of one of the agricultural inputs — labour, making food more expensive for the core of the party’s electorate, the urban middle class and the “neo middle class”. The other reason why the BJP held the MGNREGA as a bad scheme, besides its assumption that the future was in the factories, was the way it assisted rural folk, giving them money even when there was no work to do, especially in the case of drought. In 2015, during the first budget session, PM Modi declared: “I will keep NREGA alive. I may not have your experience, but all of you will grant me political skills and that acumen has told me to keep it alive as a monument to your failures since Independence. After 60 years, you are still making people dig holes”.

In other words, Modi — who had already declared in 2014, during his first speech before the Lok Sabha, that he wanted to serve “the poorest of the poor” — was saying in 2015 that he did not like the MGNREGA, but that he knew it was popular and that its termination would be badly received in the countryside. Therefore, on paper, the programme remained the same. In 2015, Arun Jaitley even declared: “Our government is committed to supporting employment through MGNREGA. We will ensure that no one who is poor is left without employment”.

But the funds that had been allocated to the MGNREGA were not disbursed. In 2016, the Supreme Court had to intervene. But the downward trend continued. The number of people who have worked 100 days a year dropped from 4,70,000 in 2013-14 to 1,70,000 in 2015-16. As early as 2014-15, the average number of days worked had dropped to 39 (it was 46 the year before). Not only had the magical figure of “100 days” evaporated, but workers were not paid within 15 days, as they should be, according to the MGNREGA. Only 28 per cent have been paid on time in 2016-17, at a time when demonetisation had made their life even more difficult and drought was affecting parts of India. In 2015-16, when droughts were much more severe, only 7 per cent of the agricultural laborers benefited from the drought-related special clause of the MGNREGA specifying that, in such circumstances, the “100 days” should be converted to “150 days”. The money spent in the framework of this scheme has been reduced to 0.26 per cent of the Indian GDP in 2016-17.

Landless peasants are probably, along with Adivasis and farmers, the main victims of the present agricultural crisis. Will the kisan take care of their interests as well, or will they look at them as parts of a different world, in terms of class and caste — as many of them are Dalits? The response will be a function of the intensity of the local conflicts within the peasantry — and of the intensity of rural distress.