Home > English > NEWS AND ANALYSIS > Exploring the Responsibility of Our Privilege: On Independent Filmmaking, (...) 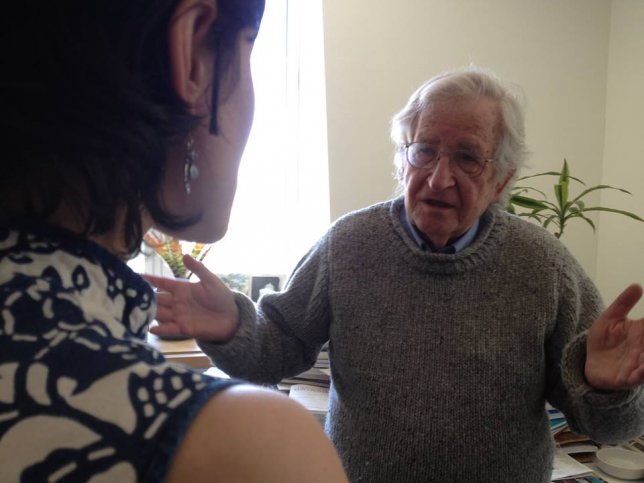 Exploring the Responsibility of Our Privilege: On Independent Filmmaking, Ecological Crisis and Human Extinction with Filmmaker Bérangère Maïa N. Parizeau

Environmental catastrophes are scattered across the globe. As they vary in source, scale and impact and are sprouting at an unprecedented frequency, the contentious notion of climate catastrophe is increasingly becoming a palpable reality.

What may be preventing many of us from grasping the severity of environmental disasters could be a lack of foresight for the distant future – a future in which the long-term damage of such disasters will be manifested not only in the deteriorating health of our planet, but of our specie as well as.

The very idea that humanity’s near future might be plagued by extinction is one that is difficult to apprehend, where the topic of human extinction is often relegated to the realms of sci-fi fantasy and scientific theory and its possibility is delayed, in our imaginations, for another odd million years. Some, however, such as independent director-producer Bérangère Maïa Natasha Parizeau, view human extinction instead as a looming probability and one that urgently needs to be made transparent to the greater public.

It is the question of this probability that has fueled Parizeau’s most recent project, a still-in-progress short documentary titled “Tree Spirit” in which she interviews renown linguist and political activist Noam Chomsky on the planet’s current state of environmental crisis.

A native Montrealer, Parizeau completed her Masters in Film & Video at California College of the Arts in San Francisco and is currently pursuing her Masters in Arts in Asian Pacific Policy Studies at UBC in Vancouver. As Parizeau’s educational background combines her artistic core with her passion for environmental policy, law and social justice, “Tree Spirit” equally encompasses the separate spheres of experimental art, environmental policy and political activism. As I sat down with her to discuss the making of “Tree Spirit”, she spoke of the inspirations, challenges and ambitions that surround the short documentary.

What motivated you to produce Tree Spirit?

I was taking a political analysis class at UBC, and I was exploring a bit more in-depth Canadian environmental politics and started questioning the whole issue of the keystone pipeline. I was trying to understand what was going on and how serious the issue was. I wanted to understand what the political responses would be that would be ideal for people like me. I’m a student, but I represent Canadians, I represent normal Canadians – where some know more and some know less.

So I emailed a few different people and one of those people was Noam Chomsky.

The reason that I emailed him was because I watched a video online by Al-Jazeera, it’s called the “Responsibility of Privilege” and it’s an interview with professor Chomsky. In this interview [Chomsky] talked about two different things that inspired me. He said that he received about 15 letters and emails a day asking him to do something with him –to collaborate on a project, and he said that he reads everything but he’s unable to collaborate with everyone, and I thought ‘oh that’s great, there is a chance of him responding to my message’. So I decided to contact him.

Secondly, in the interview he talked about the extinction of the human specie. It was the first time that I heard Professor Chomsky say that but it was the third time in the span of six months that I had stumbled on a scholar, political activist or organization who was mentioning just that.

Why do you think Chomsky responded to your request for a collaborative project?

I think he was interested in my project because he saw passion and a real concern for the environment. I hope to participate in solutions to participate in help the planet get out of the serious mess we are in ecologically. And I think that transpired in my email.

In your video preview, you mention interviewing Chomsky to discuss global environmental issues. Considering your deep-seated concern for the environment, how might these discussions transpire into your future artistic endeavors?

It’s more than environmental issues, it’s to look at the environmental context and the relationship between politics, economy , ecology and sustainability. And what I would like to do in the near future is direct a few short politico-artistic documentaries, which I can later transform into a feature film from all the different people I would interview. For example there is Vandana Shiva who talks about a global bio-diversity coalition and she is the director of a seed-saving organization in India called Nayanda. Then there’s Chris Hedges who explains that we are at a point in history where we need to consider arrest as part of peaceful protest against the oligarchic state. And the Dalai Lama who views women as potential highly compassionate world leaders.

You explore the possibility of human extinction by suggesting that it is closer to reality than we ever could have imagined. What led you to this conclusion?

I went into the law library at UBC and I just happened to find this book that changed my life, it’s called “Property Rights and Sustainability: The Evolution of Property Rights to Meet Ecological Challenges” and it’s edited by David Grinlinton and Prue Taylor. It’s a law book that contains articles that are all about ecological sustainability and the issue of sustainability in regards to law. I read that according to the United Nations millennium eco-system assisted report 2005 – and there’s nothing more official than that – the cumulative impact of people on the earth’s biosphere is jeopardizing the possibility of future generations to sustain themselves.

Then I saw David Suzuki on “Democracy Now” in an interview, and he mentioned Sir Martin Rees. Sir Martin Rees is the royal astronomer and one of Britain’s most important scientists. When he was interviewed on BBC and was asked “what were the chances that humans would still be around in one hundred years” his astonishing answer was “50 percent”. When David Suzuki mentioned that, he said: “Surely we should be in crisis mode!”

Then when I listened to the Noam Chomsky interview on Al-Jazeera, who talks about the destruction of the species not being a joke, I thought “this is the third person mentioning this and it’s disturbing”.

Are there any specifically recent or ongoing environmental issues that have incited you to action, by creating this doc?

The keystone pipeline was a major environmental issue that inspired this documentary but it goes beyond the pipeline. I’ve been in the process of researching environmental issues since 2007. After my Masters in Arts, I moved to China and was there for almost three years. I did a lot of research on the water crisis in China. This research is culminating in my current graduate program. In my Master’s program of Arts in Asian pacific policy studies, my focus is on the diplomatic relationships between China and Canada in environmental legal issues specifically, and my masters’ thesis will be a film on lake Dianchi which is one of the five biggest lakes in China. The water is hyper-eutrophied and in some areas, the lake is so polluted that it looks like green fluorescent paint. Around the lake operates the largest flower industrial production in Asia. Pesticides and other toxic waste from industrial production facilities have polluted the lake. The interconnection between globalization, politics, and ecology needs to be integrated in environmental policy and filmmaking is a good medium to communicate to lots of people.

As an entirely independent project, what are the freedoms, as well as restrictions, that arise with the production of “Tree Spirit”?

The freedom is that I am completely responsible for the political content of the film as well as the creative form. It is extremely difficult to raise money independently to produce a film.

You are collaborating with a number of multi-media artists, such as animations specialists and music artists. Would you then say that you are experimenting with the documentary genre?

Yes, I am integrating animation and experimenting with the interview based documentary genre. I am interested in the dynamic artistic quality of the filmmaking process. My goal is to inspire those who are artistically inclined as well as those who are motivated by political and environmental issues.

What is the fusion between eco/political crises and artistic creativity in “Tree Spirit” meant to achieve?

Along with “Tree Spirit” I would like to make a series of short documentaries that would be very intentional, so that people understand - because when you say to somebody there’s a possibility that humanity will go extinct, it’s overwhelming but if it is presented it in a way that embodies both problem and possible solutions – “this is what we face but these are the solutions” – that is more effective. So I could show through the short experimental film series what some of these solutions are. If I successfully unite my creativity and political motivations to start making documentaries that are so artistic that people who are not interested in politics start watching and finding interest in them. People are going to watch the documentary not only because of the radical political views of Noam Chomsky but also because of the artistic form. That’s my strategy and it’s a very intentional strategy.

As an independent filmmaker, Parizeau is collecting donations for the continuing production of “Tree Spirit” on indiegogo at http://www.indiegogo.com/projects/tree-spirit. Large or small, your donation would play a key role in advancing the growth of independent media artists who generally reap little to no profit from their projects. For Parizeau, the creation and dissemination of her art to raise environmental and political awareness are the fruits of her labor.

Is it not our privileged responsibility to encourage that?