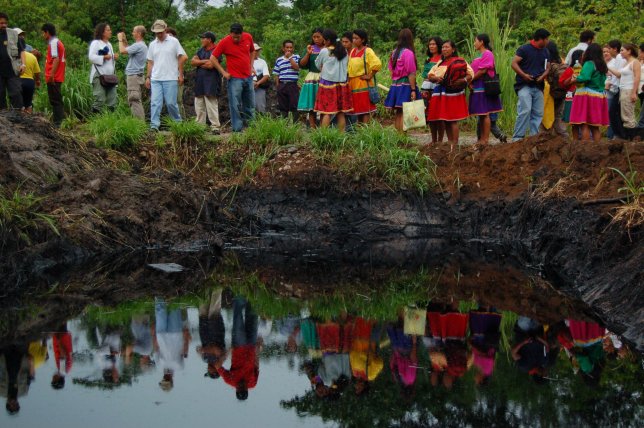 Ecuadorians in Court in Toronto Seeking Justice from Chevron

Humberto Piaguaje and Pablo Fajardo never imagined that their decades-long search for justice would ever bring them to Canada. Both made their first trip here this week for the beginning of a historic legal case that will see Chevron tried in a Toronto court for having caused environmental, social, and cultural damage in Ecuador.

The Council of Canadians met with Piaguaje and Fajardo after their first day in court. “We are looking for justice, not for money,” Piaguaje explains. “We have been fighting this struggle for nearly 23 years”.

Throughout its extensive oil operations across the Ecuadorian Amazon, Chevron emptied more than 60 billion gallons of toxic water into streams, rivers and lakes. It spilled over 650 thousand barrels of crude oil directly into the jungle and on pathways through it, covering more than 1500 kilometers of Amazonian roads with oil. At least 880 pits filled with solid waste remain exposed, continuing to spill over into waterways. The over 30,000 people in the region suffer serious health impacts to this day, including elevated cancer and miscarriage rates, and increased respiratory, kidney, liver, and digestive problems.

Piaguaje is an Indigenous Ecuadorian from the Siekopai tribe and the executive coordinator of the UDAPT, the Union of people affected by the oil operations of Texaco [now Chevron]. As such, he represents 30 000 peasants and Indigenous people from 5 nations in the Ecuadorian Amazon.

“We have always felt very rich in our lives, our nature, our culture. But now we are poor because we don’t have fish in our rivers, animals in our forest, and the land is contaminated, causing us terrible illnesses. Life for us is the water, the forest. What we have experienced is a total destruction of all life.”

Fajardo accompanies Piaguaje in Toronto as the main lawyer with the UDAPT. In addition to his legal role on this case for the past 12 years, he has lived for 30 years in the area impacted by Chevron’s spills and has been deeply affected by the disaster on a personal level.

“All of the damage was caused intentionally”, Fajardo explains. “Unlike the accidental oil spills we’re used to hearing about, there was no accident here. They purposefully spilled contaminants all over the Ecuadorian Amazon over a 26 year period in the interest of gaining the most profit from their operations with the minimum investment. They purposefully built thousands of waste ponds as close as possible to a river or stream with the intention that toxic waste would be carried away by waterways and they wouldn’t have to clean it up.”

The court struggles against Chevron have stretched out over the past 23 years. Initially beginning in a New York court, Chevron argued that this was not the correct forum for this case to be heard, and that the case should instead be moved to Ecuador. The Court of Appeals agreed and the case was in turn sent to Ecuadorian courts where it began in 2003. Ironically, Chevron’s very first argument in Ecuadorian courts was that this court was not competent to hear the case. Ultimately, the Ecuadorean court found Chevron guilty for having caused environmental, social, and cultural damage and the corporation was sentenced to pay USD 9.5 billion for the repair of environmental damage, the implementation of health systems, and recovery systems for Indigenous ways of life. This sentence was challenged in Ecuador’s Supreme Court, where it was unanimously ratified.

“We won the legal battle within the justice system that Chevron itself chose, the Ecuadorian system,” Fajardo explains. “But despite getting an excellent and strong judgment, we haven’t been able to obtain any money from Chevron because they refuse to pay and while court proceedings were underway they withdrew all of their assets from Ecuador.” For this reason, the UDAPT has decided to pursue justice in other jurisdictions where Chevron continues to have assets, attempting to enforce the Ecuadorian sentence for the remediation in Argentina, Brasil, Ecuador, the US, and Canada.

Fajardo’s determination is clear. “We want justice. We want to repair the damage this company has caused in our country. We will not allow this case to move forward with impunity.”

Piaguaje is glad to finally be in Canada, noting that of all the countries he’s traveled to, this has been the hardest country by far to obtain a visa for. He feels a strong sense of solidarity with those on this land who are fighting against Chevron and other extractive operations: “I share unity from the Amazon and the understanding that we share in the struggle for our future generations. We live on one world and our air and rivers are all connected. It is clear that we fight with a common goal.”

Humberto Piaguaje and Pablo Fajardo will be speaking at an event in Toronto tonight, September 15th.