Home > English > NEWS AND ANALYSIS > Don’t Be Fooled, BJP’s Counter-Offensive Against Farmers Is Very Much Still (...) 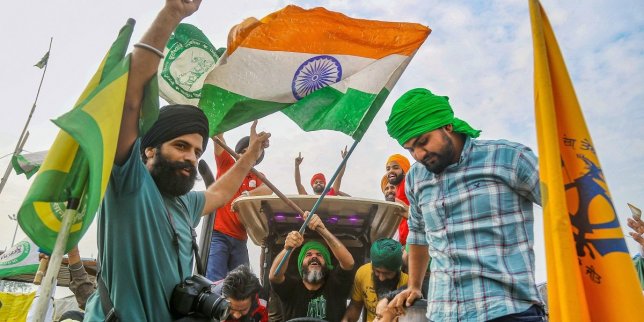 Don’t Be Fooled, BJP’s Counter-Offensive Against Farmers Is Very Much Still On

The forced surrender and public humiliation of Prime Minister Narendra Modi in the politico-economic battle over the farm laws engenders feelings of revenge against the farmers.

It might seem counter-intuitive to argue about the Bharatiya Janata Party’s counter-offensive against the farmers’ movement, when not only has the government withdrawn the three contentious farm laws but also the Ministry of Agriculture has accepted in writing, in a letter to the Samyukt Kisan Morcha, some of the struggling farmers’ other key demands. These demands include:

The ministry’s letter, however, does not make any reference to the Lakhimpur Kheri violence and the demand for the dismissal of the Union minister of state for home whose son was involved in the violence against farmers. The minister himself publicly threatened farmers with a Punjabi background who have lived and worked in Uttarakhand for decades, saying that their lands and houses will be seized if they do not stop participating in the movement.

Aside from the demand made by the farmers connected to Lakhimpur Kheri, all other demands have been accepted. The acceptance of these demands could be seen as the BJP government showing concern, even if belatedly, for the farmers, and from this viewpoint it would seem contradictory, or at least odd, that the BJP should consider a counter-offensive against them at the same time. However, the BJP government’s acceptance of the farmers’ demands and its simultaneous framing of a counter-offensive are strategically linked.

To understand the logic of this link, it is necessary to abandon the view that acquiescence to the farmers’ demands was motivated by concern and instead to recognise that it was politically compelled from multiple angles, not merely by the Uttar Pradesh assembly elections of 2022 that have been given undue importance by most commentators on the subject. The forced surrender and public humiliation of Prime Minister Narendra Modi in the politico-economic battle over the farm laws engenders feelings of revenge against the farmers, and it is this reaction that is behind the counter-offensive.

The rage against farmers circulating among trolls on BJP-supporting internet sites is one indicator of this. More importantly, the agro-business interests that were the motivating force behind the farm laws still have designs on Indian agriculture. The agenda of global and Indian agro-business corporations has not been defeated; it has merely suffered a temporary setback. Their strategic moves to re-assert their power and control are as much a material force behind the planned BJP’s counter-offensive as they were in the 2020 launching of the now repealed laws.

The main target of the BJP counter-offensive is Punjab. Though Punjab is a marginal player in the electoral game of national political governance, controlling only 13 seats of the 543 in the Lok Sabha, the state has emerged as the bastion of the current farmers’ movement against the farm laws that represented the agro-business agenda of India’s leading industrial players, closely aligned with the current BJP government and, by implication, with the Hindutva project.

In furthering its counter-offensive to destroy the farmers’ movement in India, the BJP is making comprehensive efforts to capture power in Punjab, where it has historically been a small player – its electoral base has been limited to the urban ‘upper’-caste Hindu community which constitutes about 13% of Punjab’s population. Though the total Hindu proportion of Punjab’s population is nearly 38%, including Hindu Dalits, the BJP’s lack of significant support amongst the Dalits has historically relegated it to the status of a small player in Punjab’s governance.

The BJP has been on the lookout for quite some time, even before the farmers’ movement, for a prominent Sikh face to lead their drive to find support in the majority Sikh community. Recent events have made this an even greater priority. The BJP is going all out to recruit a variety of Sikh leaders from all three main Punjab parties – Congress, Shiromani Akali Dal and Aam Aadmi Party. It is to the credit of Left-wing political tendencies in Punjab that the BJP has not been able to poach even one Left-wing activist. The Left, once a considerable force in Punjab, has dwindled since 1984 when most Left-leaning groups – particularly the CPI and CPI(M) – began mistakenly to pursue pro-Central government politics, but its unflinching opposition to the BJP now might enable it to re-emerge as the anti-establishment force it once was.

The BJP is working also to build electoral alliances with those who are reluctant to join the party. It has already announced an alliance with the ramshackle Punjab Lok Congress floated by the former Congress chief minister, Amarinder Singh, after he faced a humiliating defeat in a party struggle which saw his rival, Navjot Singh Sidhu, appointed as leader of the Punjab Congress. The third partner in this alliance is the Akali Dal faction led by Sukhdev Singh Dhindsa, a Rajya Sabha member.

It is widely known in Punjab that within the Congress, Amarinder had been hobnobbing with the BJP even while he was in power, and within the Akali Dal, Dhindsa has been a strong promoter of alliance with the BJP and was rewarded with a Padma Bhushan in 2019. Both men have had some political standing in the Sikh community but risk losing it by aligning with the BJP. Dhindsa in particular has faced stiff resistance from within his splinter Akali faction to an alignment with the BJP, because of the BJP’s negative image in the farming Sikh community. Ranjit Singh Brahampura, the most senior leader of his faction, has taken the resistance to Dhindsa’s open pro-BJP tilt by deserting his faction and rejoining the mainstream Akali Dal (Badal) that was forced by the farmers movement to part company with the BJP.

The BJP is also known to be carrying out negotiations with Jasbir Singh Rode, the nephew of the late Sant Jarnail Singh Bhindranwale, and other radical Sikh groups for considering their demand to release some Sikh political prisoners who are still in prisons even after having served their full jail sentences. This demand is a genuine human rights one, but the BJP is likely to present the acceptance of this demand as a concession to the Sikh community with the purpose of making inroads into the support base of the disaffected Sikh groups who are unhappy with the Akali Dal for not having secured the release of those political prisoners during the ten-year period of Akali-BJP coalition rule.

In the weeks and months before the 2022 assembly elections, multiple kinds of efforts – some covert – will be made by the BJP to seek support in the Sikh community. The aim of the BJP’s counter offensive is to create a pro-BJP government in Punjab with the BJP as the dominant party, instead of being a minority partner as it was in the Akali/BJP coalition (2007-2017). Such a government – with a Sikh chief minister and a Sikh police chief on the pattern of the Beant Singh-K.P.S. Gill model during the Congress regime (1992-97) – would be used to break up the farmers’ organisations in Punjab.

Once Punjab’s farmers’ organisations are destroyed, the BJP is confident that the broader farmers’ movement would be crippled. It may not succeed in its counter-strategy, because in contrast to the 1980s and 1990s when the Congress-controlled media managed to successfully portray the image of Sikhs as terrorists and secessionists, the historic success of the farmers’ movement has inspired the image of the Sikhs – both nationally and internationally – as a community of peaceful protestors who have a strong tradition of social care and community service (seva). The help provided by Sikh institutions and individuals to needy people during the COVID-19 pandemic has also contributed to this positive image. However, the risks of harm to the Sikhs and the farmers’ movement alike posed by the BJP’s counter offensive cannot be overstated. The recent incidents of sacrilege at key Sikh shrines, particularly at the Golden Temple, and the lynching of the individuals involved in the sacrilege are being construed in many quarters as parts of the grand counter-offensive against the farmers’ movement in which the Sikhs played and continue to play a leading role.

Punjab’s farmers’ organisations and their wider networks of support need to be particularly aware of the dangers presented by the BJP’s counter-offensive. From the perspective of defeating farmers’ resistance to agro-business capitalism aligned with Hindutva, winning the 2022 election in Punjab is even more important than in UP. If the BJP loses UP but wins Punjab, it will have two more years to regain the upper hand in UP in advance of the 2024 General Election. However, if it loses in Punjab – even if it wins in UP – its agenda to advance agro-business interests would be effectively defeated. If the BJP were to lose both in Punjab and in UP, that would be the biggest possible setback for the agro-business and Hindutva agenda.

Punjab’s farmers’ organisations need urgently to craft a well-thought-out election strategy that can defeat the BJP’s attempt to gain power in Punjab. The decision by 22 farmers’ organisation (out of the total 32 from Punjab involved in the current farmers’ movement) to contest the 2022 Punjab assembly elections under the banner of the Samyukt Samaj Morcha (SSM) will be keenly observed from the angle of sustaining the unity of farmers organisations and the potential to defeat the BJP’s counter-offensive. The farmers’ organisations have won the battle against the BJP on the farm laws – primarily an economic victory, though with serious political implications; they now need to embark on the campaign to thwart the BJP’s plan to capture political power.