Home > English > NEWS AND ANALYSIS > David Cameron joins the new Scramble for Africa – catching up with (...) 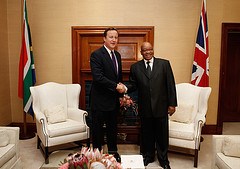 "Only last week the German chancellor Angela Merkel visited Kenya, Angola and Nigeria, accompanied by a delegation of German business leaders, with a message that she was promoting trade not aid. Cameron will follow a similar pattern. He is taking a 25-strong business delegation, which includes the Barclays chief executive Bob Diamond, and saying the purpose of his trip is to promote trade"

Intense discussions were held in No 10 last week about whether David Cameron should abandon a two-day visit to South Africa and Nigeria which begins on Monday morning on Nelson Mandela’s 93rd birthday.

There were fears that flying across the world at such a sensitive political moment could risk a John Major moment. The former prime minister is haunted by memories of overseas trips that were overwhelmed by events back home.