Home > English > NEWS AND ANALYSIS > Change is coming to Mexico: This Time, No Blood Will Be Shed 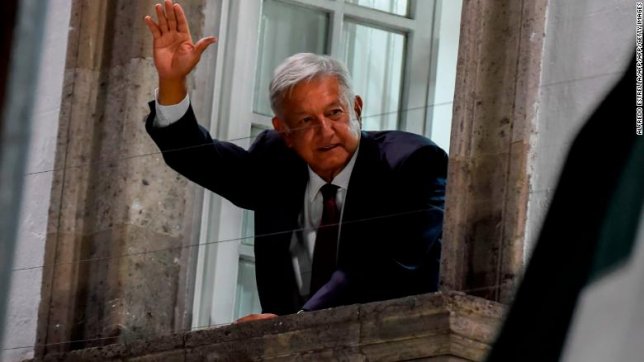 Change is coming to Mexico: This Time, No Blood Will Be Shed

This Sunday, Andrés Manuel López Obrador became the president-elect of Mexico. He won because he convinced a majority that through him, a change of regime in Mexico can be achieved through peaceful means – and without igniting a civil war. It will be a first in our nation’s history.

In his final campaign speech, López Obrador announced that his government will push for a “peaceful-but-radical” transformation. He then added that “we haven’t made all this effort merely for cosmetic changes, for lip service”.

The task ahead is monumental due to four major challenges Mexico faces today: violence, corruption, inequality and Donald Trump. Their resistance to his government will be vast and the outcome, uncertain.

To understand the significance of this moment, we need to look to the history of the left in Mexico, and how it has confronted countless massacres, assassinations, electoral fraud and smear campaigns over the years. Indeed, Andrés Manuel López Obrador’s life story is intermingled with this movement.

Before 1968, leftwing parties were marginalized or irrelevant. When a student movement appeared that year, peacefully demanding less state violence and more liberties for the citizenry, the president at the time sent his guards to shoot into a defenseless crowd. The night of Tlatelolco continues to be engraved not only on individual memories, but on our collective consciousness as well.

Out of this tragedy was born the generation of transition. Some took up arms, while most of us employed peaceful means as we continued to further the agenda of ‘68 as professors, journalists, activists, labor organizers, or professional politicians representing newly created political parties. We also dedicated ourselves to reconstructing past events in order to convey them to subsequent generations.

These efforts have formed part of the Mexican transformation. In the 1970s, the modern human rights movement was born in order to attend to the victims of the dirty war against the guerrillas, later encompassing many other issues as well. Moreover, leftwing parties were legalized and, in the presidential elections of 1988, achieved a basic understanding with the party on the right in order to transform the voting ballot into a lever for change. In the 80s began an alternation that gradually undermined the governing party (PRI).

Then, in 1994, we saw the strength of the nonviolence. In Chiapas, marginalized indigenous peoples rebelled and the Zapatista Army of National Liberation announced that it was launching an offensive against the “nation’s capital, to defeat the army”. Once the fighting began, the social and political left poured out into the streets, demanding a cease-fire from the government and from the insurgents. Both government and insurgents acceded to the petition and by the presidential elections that year, the Zapatistas would join in the demand for “free and democratic elections”.

Out of that crucial moment came the great electoral reform of 1996, permitting the defeat of the governing party (PRI) in the year 2000. With Vicente Fox of the rightwing Pan began one of the unhappiest stages of the transition, because he betrayed his democratic commitments. Graver still, the three major parties (and that includes the leftwing PRD) were contaminated with corruption and inefficiency, while the state weakened and de-facto powers emerged, notably organized crime.

During the Fox administration, the career of López Obrador as a presidential candidate began. As the head of government of Mexico City, he stood out for his personal honesty and a reasonably efficient administration, distanced from radicalism. In 2006, he competed for the presidency. Although he led in the polls, he lost due to strategic errors, personality defects, and massive electoral fraud. In 2012, he made another attempt and failed, although his ceaseless nationwide canvassing allowed him to build a new kind of political and social base.

He learned from these lessons and in 2018, unfurled an impeccable campaign that took advantage of the errors of his adversaries and the disrepute of corrupt and inept parties. López Obrador is backed by a formidable coalition of political, social, and cultural forces built on a foundation of veteran leftwing organizations that have tolerated the alliances the candidate has chosen to make with conservative organizations.

Today, the future of Mexico is being forged. Let us indulge in a brief moment of celebration that the Mexican left has resisted aggression and temptation without altering its faith in nonviolence – and that it has been rewarded for its perseverance.

Sergio Aguayo Quezada is a Mexican academic and human rights activist. His op-ed was translated from Spanish by Tanya Huntington