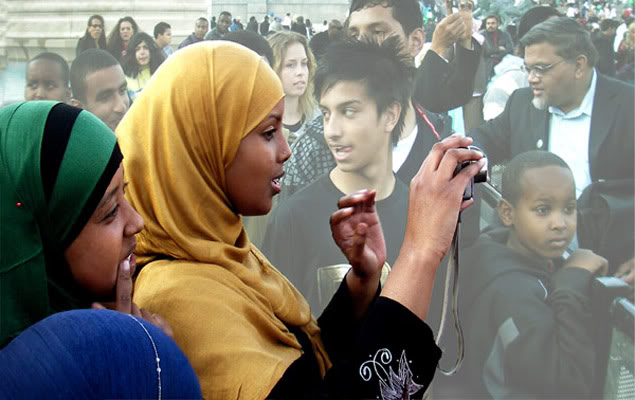 Montreal, February 19, 2015 — While all Canadians are concerned about the threat of violent extremism in the world, Canadians for Justice and Peace in the Middle East (CJPME) warns against the danger of growing Islamophobia in Canada. CJPME believes that the threat of violent extremism in the world – including violent Islamic extremism – must be condemned and addressed, but that Muslims in Canada must be protected from a number of emerging forms of discrimination. “For the protection of Muslims and other minorities, and for the preservation of cherished values, we should not let global events undermine the legal right to equality in Canada,” stated Thomas Woodley, President of CJPME.

CJPME points out a seeming trend against all things Muslim in Canada in recent weeks, presumably fuelled by generalized fear relating to the so-called “Islamic State” and other incidents around the world. Last week, Shawinigan, Quebec mayor Michel Angers admitted that his city council had caved in to “irrational fears” when it refused to rezone land to allow the opening of a mosque in the city. Earlier this week, the third-most popular political party in Quebec suggested that a public body be created to investigate people who potentially disagree with so-called Quebec values, in reference to the Shawinigan incident. In another example, a Muslim-Canadian woman in Quebec was told by an Employment Quebec counsellor that she had made a choice to "live in a ghetto," and that she would be better off if she went to an "Arab country" to find work. This week, the Federal government chose to appeal a Federal Court decision disallowing a 2011 government decree banning the niqab at citizenship swearing-in ceremonies. These are only a few public examples of a much broader phenomenon emerging in Canada, one where more and more Muslim-Canadians encounter incidences of discrimination as they go about their daily lives.

“Canada must ensure that its response to threats – real or imagined – is carried out in a way which respects all Canadian citizens, and which respects existing Canadian law,” continued Woodley. CJPME points out, for example, that it is not the legal role of a municipality to accept or deny services based on the perceived views or threats posed by a group. Existing human rights and criminal law in Canada protect society against incitement and hate, and enables the appropriate security forces to investigate threats. “We cannot allow prejudices and pre-conceptions – whether held by individuals, businesses or government agencies – to start skewing decision-making against members of a minority. It violates their liberties and constitutional rights.”

This week, US President Barak Obama is attending a conference on the question of violent extremism. Nevertheless, non-profit leaders in that country also question the government’s ability to fairly address the problem. “This focus solely on attacks committed by Arabs or Muslims reinforces the stereotype of Arab- and Muslim-Americans as security threats, and thus perpetuates hate of the [respective] communities,” said Samer Khalaf, the president of the American-Arab Anti-Discrimination Committee.

About CJPME - Canadians for Justice and Peace in the Middle East (CJPME) is a non-profit and secular organization bringing together men and women of all backgrounds who labour to see justice and peace take root again in the Middle East. Its mission is to empower decision-makers to view all sides with fairness and to promote the equitable and sustainable development of the region.

The whole or parts of this press release can be reproduced without permission.