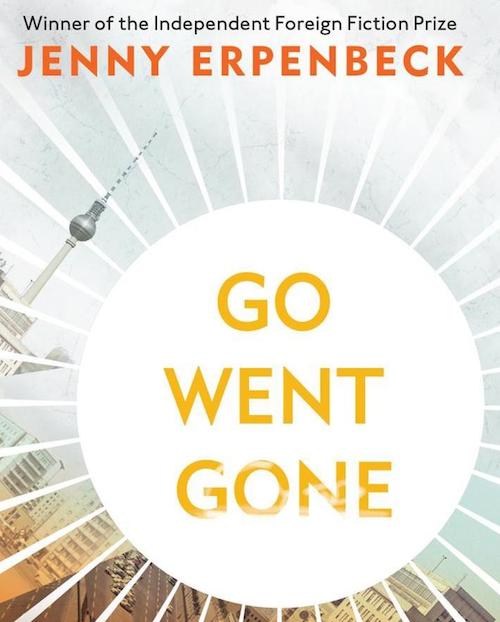 Go, Went, Gone By Jenny Erpenbeck Translated from the German by Susan Bernofsky

There didn’t seem to be any apparent references or connections but for some reason Richard from the novel ‘ Go Went Gone’, took me back to Atticus Finch of ‘ To kill a mockingbird ‘. Even though written years apart Richard and Atticus seem to be in some unexplainable way the same. Seeking, and in their own quiet yet determined ways, fighting for justice in an increasingly unjust and intolerant world, both the characters show us the ways, to a more just and humane world

Jenny Erpenbeck’s book left within me a warm glow. Amidst all the wars and cruelty, economic and social and political distress and destruction caused by big powers and corporations, there is still hope. And we see a glimmer of it through Richard and his new friendships.

Richard is a professor emeritus, who lives alone after his wife’s death. Through many references to various authors, poets, the Berlin Wall we know that Richard has been on the eastern part of Germany and only after its fall has he become a citizen of Germany as a whole.

It is in this Berlin that Richard witnesses the refugee camp at Oranienplatz, Alexanderplatz, being closed down and refugees moved to different places in the city.

“ The next day he arrives at Oranienplatz to find the square cordoned off and surrounded by police; he’s just in time to see the last of the boards, tarps, mattresses, and cardboard signs being shoved into a heap by a bulldozer, loaded onto trucks and carted away…”

Soon the camp is removed, bull dozed and the inhabitants transferred across the city to different facilities. One such facility is an abandoned nursing home near Richard’s home. And Richard starts visiting the facility as a ‘researcher working on a project’.

Very soon through Richard’s growing research and friendship with the refugees we get to know the people behind the term, refugees . We get to know them by their names and countries. We hear their stories of displacement, killings and trauma.

We learn in detail the horrific boat rides across the Mediterranean.

“ After five days we were forced onto the boat. Altogether around eight hundred people. …The Europeans bomb us —so we’ll bomb them with blacks, Gaddafi said…..

Five days total without anything to eat or drink. All of us were in very bad shape. Some people died. And the ones who were still alive had no strength left at all. I was so weak. So weak. Everything looked blurry…..

“Rashid said he wished he could cut off his memory. Cut it away. Cut. A life in which an empty present is occupied by a memory that one cannot endure, in which the future refuses to show itself, must be extremely taxing, Richard thinks, since this is a life without a shoreline, as it were.”

Similar stories continue as the men in the centre talk to Richard.

Suicide attempts, health and psychological traumas, protests and above all the feelings of not being wanted, of no hope, in their present and future after having lost all their past is brought out with so much pathos..

The refugees’ struggle with the bureaucracy, or ‘ bureaucratic geometry’- a consequence of colonialism where “ the colonized are smothered in bureaucracy, which is a pretty clever way to keep them from taking political action.”

For example, the refugees can’t afford a lawyer, and they barely understand German. We see Richard driving them, sitting and translating, talking to lawyers, finding out ways to help.

“ He sees Osarobo trying to understand the map, and then he knows that Osarobo, who traveled from Niger by way of Libya to Italy, and then from Italy to Berlin, has never before seen a map of any city or country on earth.”

When their stay in Germany is refused and the men are told to leave, we see individuals, human beings, people, through Richard.

“ Ali from Chad, who’s worked as a home health-care aide for Anne’s mother, has to go. Khalil, who doesn’t know where his parents are, or even if they’re still alive, has to go. Zani, the one with the bad eye who collected articles about the massacre in his hometown, has to go. Yussuf from Mali, the dishwasher who wants to become an engineer, has to go. Apollo has to go, Apollo who is at home in the deserts of Niger, in the region where France is prospecting for uranium.”

Here we witness an individual’s attempt at doing whatever is within his reach. Offering his house, music, food, buying land for his new Ghanaian friend, bringing in his friends to accept and reach out to these young Africans.

And it gives us hope.

Like Richard said “ the Africans probably had no idea who Hitler was, but even so: only if they survived Germany now would Hitler truly have lost the war “.

Must living in peace—so fervently wished for throughout human history and yet enjoyed in only a few parts of the world—inevitably result in refusing to share it with those seeking refuge, defending it instead so aggressively that it almost looks like war”?

This to me was the power of the novel. To shine a light on the situation of these people, made homeless through situations not of their making and now suffering, because of the treatment meted out to them in these foreign lands and the subsequent realization that they are not wanted.

To quote the writer, Rebecca Solnit “ Hope doesn’t mean denying these realities. It means facing them and addressing them by remembering what else the twenty- first century has brought, including the movements, heroes, and shifts in consciousness that address these things now”