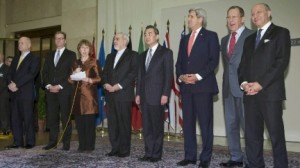 A Saudi-Israeli Defeat on Iran Deal

The Saudi-Israeli alliance hoped to sink a deal between Iran and world powers that limits but doesn’t end Iran’s nuclear program, so the deal’s signing in Geneva is both a defeat for that new alliance and a victory for President Obama and diplomacy, writes Robert Parry.

The interim agreement restraining Iran’s nuclear program represents a stern international rebuke to the new Saudi-Israeli alliance which sought to thwart the deal and maneuver the United States into another military confrontation in the Middle East.

Despite increasingly hysterical rhetoric from Saudi Arabia, Israel and their many media and political allies, the world’s leading powers – the five permanent members of the United Nations Security Council plus Germany – hammered out an agreement that increases chances for a peaceful settlement with Iran. Over the next six months, Iran and the so-called “p-5-plus-1” can now try to devise a permanent framework for ensuring that Iran keeps its word about not wanting a nuclear bomb.

Surely, Saudi Arabia and Israel will not abandon their efforts to torpedo a fuller agreement – and one can expect more sabotage by members of Congress, elements of the Western news media, and countries, such as France (a disgruntled p-5-plus-1 member), angling for lucrative business deals with Saudi Arabia.

Nevertheless, this interim arrangement with Iran – on the heels of a negotiated agreement on Syria’s chemical weapons arsenal (which headed off a threatened U.S. military strike last summer) – means that Saudi Arabia and Israel were blocked on two high-profile issues in which they favored a violent solution that would have dragged the U.S. military into another Mideast conflict. On both Syria and Iran, the Saudi-Israeli tandem was stopped by a big-power alliance headed by the United States and Russia, favoring diplomacy.

Thus, what we have seen over the past several months — though mostly missed by the mainstream U.S. news media — is a dramatic shift in the polarity of geopolitics, especially in the Middle East. The Saudi-Israeli alliance, with its combination of wealth and oil on the Saudi side and propaganda and lobbying on the Israeli side, has represented a new pole testing out its combined strength against the more traditional powers of Washington and Moscow.

Since Saudi Arabia and Israel lack the “hard power,” i.e., the military might of the United States and Russia, the Saudi-Israeli alliance has sought to deploy its “soft power” of Saudi financial inducements and Israeli political and media manipulation. That has meant Saudi Arabia spreading petrodollars around to economically vulnerable countries like France — and to clients like the Egyptian military and Syrian rebels – while Israel puts talking points into the mouths of its many neocon puppets in Congress and the U.S. press corps.

Regarding Iran, the Saudi-Israeli strategy was to torpedo the interim deal by getting France to blast a hole in the negotiations in Geneva while influential neocons in Washington harassed President Barack Obama sufficiently to prevent him from saving the sinking ship. Then, the thinking went, he would have few options left other than to join Israel in a bombing campaign against Iran with the Sunni royals of Saudi Arabia cheering the battering of their Shiite rivals.

This Saudi-Israeli strategy was aided, apparently inadvertently, by the inept diplomacy of Secretary of State John Kerry, who – the fluent French speaker that he is – agreed to French demands for changes to the pending agreement two weeks ago, thus scuttling that deal with the Iranians.

As the p-5-plus-1 negotiations with Iran took on water and foundered, the Saudis and the Israelis whipped up new waves of resistance from their buddies in Washington. There were congressional threats of new punitive sanctions against Iran and numerous op-eds accusing Obama of appeasement toward Iran.

But President Obama did not back down. He fended off any immediate congressional action on new sanctions and worked with Russian President Vladimir Putin to salvage the Iran deal. I’m also told that Obama personally ordered Kerry to – this time – steer the Iran deal home.

On one level, the interim agreement, signed early Sunday morning, only curtails Iran’s nuclear program for six months while further negotiations proceed, but the signing represents an historic achievement, the first time the United States and Iran have joined in a formal diplomatic pact since the Iranian revolution of 1979.

Yet, perhaps even more significant, the agreement is a message to the Saudis and Israelis that their desire to be the small-power tail wagging the big-power dog has its limits, that Obama and Putin can form their own alliance in favor of diplomatic solutions.

In facing down Israel’s hawkish Prime Minister Benjamin Netanyahu, President Obama also has done something that few recent U.S. presidents have dared even attempt, to stand up to Israel and its imposing lobby.