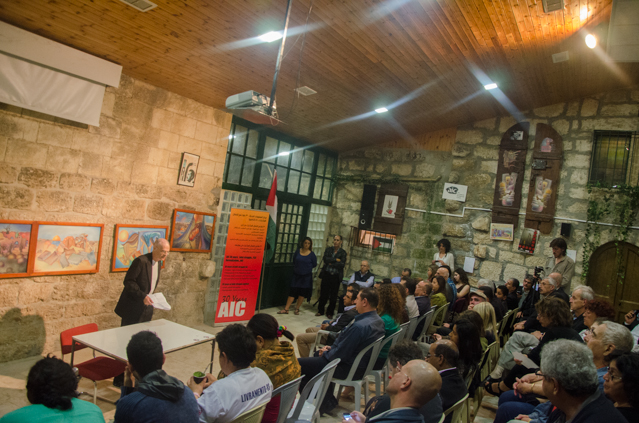 30 Years of the AIC: Happy Birthday!

Over 150 men and women came to Beit Sahour Saturday night to celebrate the 30thanniversary of the Alternative Information Center. Many Palestinians, of course, but also tens of Israeli activists as well as many internationals shared our celebration, which combined a political event and social gathering.

Nassar Ibrahim, Dr. Shimshon Bichler and myself, on behalf of the AIC, emphasized the specificity of the AIC as a joint Palestinian-Israeli political organization that for three decades has promoted the vision of a joint struggle against Israeli colonialism and for a shared future based on freedom and equality. We all stressed the fact that the uniqueness of such a project thirty years ago remains unique nowadays.

Michele Sibony from the French Jewish Union for Peace, former MEP Luisa Morgantini and comrade Carecas from Via Campesina expressed the solidarity of our international partners and thanked the AIC not only for the valuable information it provides to the global left, but for the exemplary steadfastness it symbolises for thousands of activists throughout the world.

The important political delegation from Hebron present at the celebration confirmed the strength of AIC political work in the southern West Bank and its acknowledgment by the local Palestinian leadership and activists.

Thirty years ago, the decision to establish a joint Palestinian-Israeli political project was perceived as a utopian idea doomed to crash at the first political challenge in the area. Since then, we have had many such challenges, but the AIC managed to keep its unity. As one of the speakers stressed, the pride of the AIC has been that never in the AIC history have the political debates – and there were many – divided between Israelis on the one hand and Palestinians on the other. Can one imagine better evidence that the utopian objective of establishing ONE Palestinian-Israeli organization, with one program, one staff and one board, has been met successfully, despite our own doubts about the sustainability of such a project!

The new AIC strategic unit will focus on addressing the issue of our future, in a region that is passing through a revolutionary process and a world in which the relation of forces are rapidly changing. A new world, a new region – and new prospects for the Alternative Information Center!

We need your partnership to continue the AIC’s singular work. Please donate today and say yes to the joint struggle, no to normalization of Israel’s occupation!

* Donations can be made online via the AIC website

Thank you for your support - together we can only succeed!