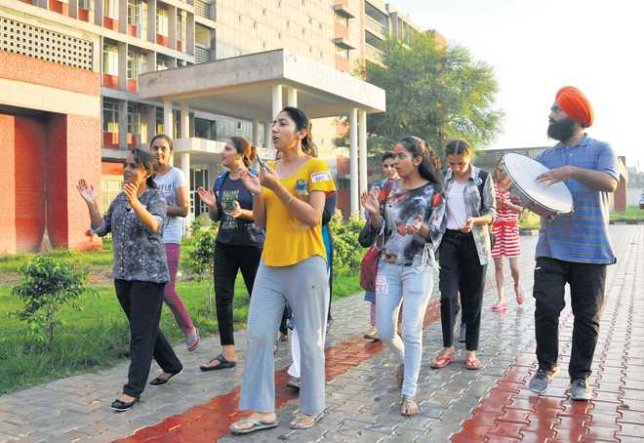 Why Kanupriya’s Election Win in Punjab University Is So Significant

A woman student, Kanupriya, being elected to the top post in the student union elections at Panjab University (PU), Chandigarh, for the first time in the history of this university is significant in its own right as this university is one of the oldest in the Indian sub-continent. However, the significance of this election victory goes far beyond the confines of the university campus. It would not be an exaggeration to say that this election victory has attracted national and, to some extent, even global attention.

Sharing of a personal experience at this point might illustrate better the point about global interest. I (PS) was at the concluding session of the annual conference of UK’s South Asia Anthropologists Group at St John’s College, University of Oxford, when I received a message from a nephew from Punjab that a woman student representing Students For Society (SFS) group had won the presidency of the PU Students Council. Since it was a concluding session and was open to any new information on South Asia being shared with the delegates, I shared this message. It was received with warm applause with another delegate sharing the news about India’s Supreme Court decriminalising gay sex relations.

Two news stories in one day symbolising possibly new directions in gender relations in India seemed to evoke some positive imaginaries about India in contrast with many depressing stories about arrests of human rights activists and lynching of Dalit and Muslim youth that had been heard before.

Shortly after the conference, I (PS) received a call from a radio station in Canada requesting for an interview on the subject as that radio station covers an area with a substantial population of Punjabi diaspora. Later, when we accessed the social media, there was a flood of messages including poems celebrating this election victory. It appears that this election victory seemed to evoke hope about Punjab and India in many ways.

A news story in the Tribune reporting that Kanupriya had declared that “Students here have decided that the RSS-BJP can rule other universities, but not the PU” was seized upon and shared widely in India and abroad by those, who saw in this victory the signs of a new turn in India’s feared drift towards increasing power of right-wing authoritarian politics. Many hope that this might have a demonstrative effect on other campuses and once the students turn against the Hindutva’s politics of hatred, this will become a formidable force against the Hindutva brand.

People in Punjab saw in this election victory positive images about their youth against the dominant narratives in the last few years that the youth had become drug addicts, directionless, prone to gangsterism or escaping abroad.

This organisation of their youth (Students for Society) seemed to defy all these narratives. They seemed to be socially committed, against casteism and sexism, not enamoured by money or the lure of going abroad. They openly declare that they derive their intellectual inspiration from the ideas of Bhagat Singh, the revolutionary icon.

The aspect which seems to highlight most the strength of the SFS is its commitment not only in theory but also in practice to gender egalitarianism. Unlike the student organisations of other political formations affiliated to the BJP/RSS, Akali Dal and Congress, who give token representation to women in their organisational hierarchy, the SFS has women students in the leading position in its organisational structure and decision-making process. Due to this leadership position of women in its organisational set up, this was not the first time that a woman student was the group’s nominee for the top position of presidency in the student council elections.

The ideological orientation of the SFS towards gender egalitarianism seemed to be a good fit with the empirical reality of increasing social importance of women in higher education not only in the PU, but even beyond.

Women students became the majority in degree granting institutions in the USA in 1979 and for the last over a decade, they constitute over 57% of the student population in such institutions. The data for the UK between 2012 and 2017 shows share of women rising from 56% to 57% among degree-level students.

The SFS would not have achieved what it has if its members had not translated their ideals into concrete issues of concern to the day to day life of the students such as increasing privatisation of education leading to hike in fees, undemocratic governance of university institutions and unreasonable restrictions on the mobility and choices of women students.

The SFS, true to its name, has also endeavoured to contribute to enlarge the social vision of students by situating university life into the larger concerns of society. It has actively participated in larger civil society movements in Chandigarh and beyond. For instance, in early 2014 when a theatre performance in Chandigarh was stopped by local ABVP workers, the SFS participated actively in a local campaign against curbing of artistic expression.

The SFS also organised protest marches against the rape and murder of the young Kashmiri child, Asifa. In the last few weeks, SFS members have been highly vocal and launched an active social media campaign against the arrest of human rights activists across various parts of India. The SFS has consistently campaigned against caste discriminations in ideas, practices and institutions, and has contributed to spreading Dalit articulations over economic, social and political issues.

Chandigarh as a city has contradictory pulls on young students coming here to study. On one hand, there is superficiality about trying to pretend to be smart and posh and on the other, the serious challenge of radical ideas and visions confronting conservative mode of thinking and behaviour. In this continuous contestation, Kanupriya and the SFS have achieved a marvellous victory that would need to be carefully nurtured to take it further to a sustainable hegemony.