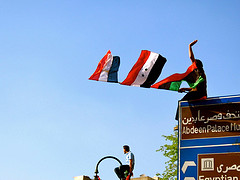 "The West Is Terrified of Arabic Democracies"

Interview with Noam Chomsky about the Arab Spring

Noam Chomsky is one of the major intellectuals of our time. The eighty-two-year-old American linguist, philosopher and activist is a severe critic of US foreign and economic policy. Ceyda Nurtsch talked to him about the Arabic spring in its global context

Mr. Chomsky, many people claim that the Arab world is incompatible with democracy. Would you say that the recent developments falsify this thesis?

Noam Chomsky: The thesis never had any basis whatsoever. The Arab-Islamic world has a long history of democracy. It’s regularly crushed by western force. In 1953 Iran had a parliamentary system, the US and Britain overthrew it. There was a revolution in Iraq in 1958, we don’t know where it would have gone, but it could have been democratic. The US basically organized a coup.