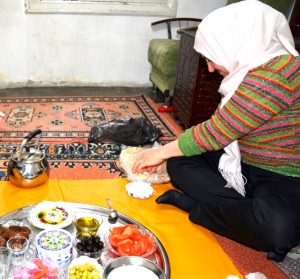 The Story of Um S and Her Family

Um S is employed at the Firefly centre in Antakya as a cleaner. Um S has five children. Three of her daughters are registered in the centre’s educational programmes.

Displaced inside Syria, her family comes from Latakya mountain. Their home was bombed and completely destroyed by Syrian government forces in 2013. Although the family survived, tragically their youngest daughter was seriously wounded at just twelve months old.

After the attack, the family moved nearby to their grandfather’s home. It had been partially destroyed in 2012 and three of Um S’s sisters killed. The house was repeatedly bombed in 2014 and 2015, too, after Um S had fled to it. After another bomb attack in 2015 killed Um S’s eldest sister the family fled again, moving among different safe areas in Akrad mountain.

In late 2015 the Russian army entered the area making the villages unsafe, and so the family was forced to flee yet again, this time to a camp close to the closed Turkish border. They stayed there for three months until the chance happened that the Turkish authorities opened the border for a day. Um S’s family took the opportunity and managed to cross, leaving the rest of their extended family behind.

Refugees inside Turkey the family was taken by the Turkish authorities to a camp in the desert close to Orfa. Um S described how hard this time was. The crowded camp was unsafe, particularly for their daughters, and the family barely had enough food to survive. Perpetually terrified, Um S and her daughters mostly stayed in their tent with only her husband and son leaving. There was a school in the camp, but the education was poor quality.

Um S described that time of her life as feeling as if she was in a prison with barely enough food. As mountain people living in an overcrowded camp in the desert, she remembers the joy of once seeing a desert flower in the spring. Ultimately, they decided there was no future for them in the camp and moved to Antakya, Turkey. They departed with their few possessions: some clothes and two mobile phones. They found a small house with little light in the poorest area of the city, for which the rent was 500 Turkish Lira (TL) a month with no furniture. Um S’s eldest son found a job as a waiter in a coffee shop and her husband as labourer in the Souk (market).

“D” aged 16 attended school until 2015 in Syria, even while the family were internally displaced (IDPs). She also attended the school in the Camp in the desert, receiving a very low standard of teaching. She was registered in a Turkish school on arriving in Antakya, and her mother Um S walked her to school every day for two months, because she was so afraid of her new setting. There she was placed in a class with 10-year olds and spoke no Turkish.

D is very shy and now registered with Firefly Syria’s education centre in Antakya. Here she receives one-to-one maths tuition with the lead teacher where he sets weekly challenges for her. She is also learning Turkish very quickly. Very hardworking, D gets up at 4 am every day to study. A quick learner, we hope that within a year we will be able to accelerate her learning so she can re-join her peer group to do her baccalaureat.

“Z” aged 13 also attended school until 2015 in Syria, while the family were internally displaced. Then she also attended the low-quality camp school. She was registered in a Turkish school on arriving in Antakya and was also walked to school every day for two months by her mother in 2017 as she was so afraid to go alone.

Her educational and language level, she spoke no Turkish, were such that she was placed in a class of much younger 7-year olds.

Three months ago, Z registered in Firefly Syria’s applied sciences programme, and is now our top student. She excels at studying electrics and is now already nearly fluent in Turkish. She is highly sociable and attends a Turkish run Saturday club to improve her language skills and meet new friends.

“S” aged 6 did not want her photograph taken. She was the baby wounded in Syria as a one-year-old. Following successful treatment, she currently has no ongoing health issues, although she is very prone to infections. She attended a school in the Camp in the desert when she first arrived in Turkey, receiving the same very low standard of teaching as her sisters. She was then registered in a Turkish school on arriving in Antakya, and to this day her mother walks her to school every day as she continues to be afraid.

She was placed in a class with students her own age in Turkey and was registered with Firefly Syria’s programme 3 months ago. She enjoys our activities and has learnt her Arabic letters. She is working in a small class and gradually making friends despite being very shy. Over the next few months our centre hopes to nurture her confidence and encourage her to contribute more in group activities. Remarkable of the resilience of the young Syrians we are working with, she is now speaking Turkish.

Firefly continues to provide employment for Um S and is working directly with the individual educational and psycho social needs of her three daughters.

This is just one example of family stories of displacement that make up the story of Firefly Syria. All of the children we work with have fled conflict and suffered horrific first-hand experiences no child should ever be exposed to, often losing family and homes in the process.

In the case of the family of Um S, since arriving in Antakya in May 2017 they have gradually been rebuilding their lives and Firefly Syria has been a big part of that process. Last month they were able to buy a refrigerator and in addition to Firefly Syria’s rehabilitative education classes, Um S has been employed by Firefly Syria for four months at 800 TL a month.

In this way, Firefly Syria is the story of ‘Um S’ and her children.

Led and established by Fadia Shaker and her Syrian refugee colleagues, Firefly Syria is a refugee-led initiative that has in a short time, touched many shattered lives … for the better. By providing for these families’ futures and activities for children to interact with their peers, these young Syrians can learn to play again, accelerate their learning and regain their ambition for their own future.

This work is done with support from Firefly UK and its Projects Coordinator Maria Chambers.

For more information about Firefly Syria and how to support them, visit Firefly International’s website and donate today.