Home > English > NEWS AND ANALYSIS > The Promise, and Peril, of Modi’s Mandate 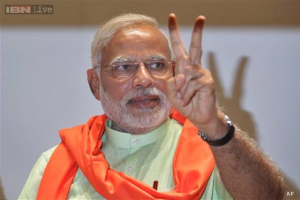 The Promise, and Peril, of Modi’s Mandate

Monday 26 May 2014, by Siddharth Varadarajan

Mr Modi’s remarkable election campaign may have been fuelled by unprecedented sums of money and magnified by the logic of the first-past-the-post system — which converted a 12 percentage point difference in vote share with the Congress into a 600 per cent difference in seats – but it has helped him banish, for all intents and purposes, the lingering shadows of a darker past.

Troubling questions about his record that were met earlier with menacing silence or anger, but never answers, can no longer be asked. With the absolute majority Mr Modi has now delivered for the BJP, a new ledger of accounts has been opened. Any audit of his record will henceforth be on his own terms.

Narendra Damodar Modi asked the electorate for 272+ seats and they have given it to him. He asked voters for a ‘Congress-mukt Bharat’ – an India free of the Congress – and they have handed it to him. So reviled was the Congress-led United Progressive Alliance government and so terrible its record of governance that the party has justifiably suffered the worst defeat in its 129-year history.

The ‘Modi Wave’ left nearly 60 per cent of the electorate cold and failed to make a major dent in those states where regional parties still enjoy a high degree of credibility with voters like Tamil Nadu, Odisha and West Bengal but it has wrecked the Congress everywhere. The wave swept through Uttar Pradesh, where it also managed to draw away voters from the Bahujan Samaj Party if not from the Samajwadi Party, and of course Bihar too.

With the Congress winning less than 55 seats, the 16th Lok Sabha will not have an Official Opposition or a formal Leader of the Opposition. Ever reluctant to shoulder responsibilities in a competitive environment, Rahul Gandhi is once again off the hook. But the question of an effective opposition so essential for democracy is not merely a formal one.

Taken together, MPs from national parties like Congress, the Left and the Aam Aadmi Party will barely add up to 60.

Regional parties like the AIADMK, the TRS and the Biju Janata Dal, which are non-ideological, or the Trinamool Congress, which veers towards populism but is essentially Bengal-centric, are unlikely to show much interest in, let alone challenge, the Modi government on a large number of crucial areas of policymaking.

Mr Modi will lack a majority in the Rajya Sabha for at least the next year so he will either cut deals with regional parties to ensure the passage of legislation in the upper house or look for ways to take executive decisions, especially in the economic and financial sphere where discretionary powers abound.

Indeed, BJP leaders close to the incoming Prime Minister have already drawn up a list of measures that could be implemented by administrative fiat. Spared the burden of filling his cabinet with allied parties, Mr Modi will have the freest hand of any Prime Minister since Rajiv Gandhi.

While the Indian corporate sector and native and foreign investors in the stock market are justified in celebrating the arrival of a “right wing”, business-friendly government, this is not necessarily the side of ‘Modinomics’ that most BJP voters would like to see. Mr. Modi campaigned hard on a platform of economic development, job creation and an efficient administration, and the 40 per cent of voters who backed the BJP-led alliance did so because they believe he will deliver on these promises. But contradictions exist, especially in areas where satisfying the aspirations of a corporate constituency – for example in the area of labour reform – will perforce end up undermining the aspirations of voters for jobs and job security.

Another area to watch closely will be the Modi government’s attitude towards law and order, and especially the right of vulnerable citizens – women, minorities, adivasis and dalits – to security, justice and equity.

Mr Modi lost a golden opportunity during the election campaign to assure India’s Muslims that they would be safe under him when his attention was drawn to VHP leader Pravin Togadia’s suggestion that violence be used to evict a Muslim family in Bhavnagar that had bought a house in a so-called Hindu area.

As Gujarat’s Chief Minister and Home Minister, Mr Modi could have reached out to the Muslim family and assured them – and by extension all of India’s Muslims – that they had the right to live and work wherever they liked in India and that he would defend their right to do so. Sadly, he made no such effort. All he did was tweet his disapproval of those “claiming to be BJP’s well wishers [who] are deviating the campaign from the issues of development & good governance.”

Will Mr Modi as Prime Minister be more concerned about the insecurity Indian Muslims feel than he was as a candidate for the job? Will he find a way to reach out to this crucial section of the population which today views him with distrust? Or will he regard any talk about addressing their concerns and fears as “appeasement”?

Mr Modi’s critics can be forgiven for feeling a knot in their stomach today but this is not the first time the Indian electorate has ignored the unpleasant baggage a candidate brings and been seduced by the dream of technology, development and corruption-free government.

In December 1984, Rajiv Gandhi won 404 seats barely a month after his Congress party presided over the mass murder of Sikhs in Delhi, Kanpur, Bokaro and other north Indian cities. Rajiv was an attractive figure for young voters who embodied the same kind of technocratic promise that Mr Modi does today. The mandate Rajiv received was even more decisive. He ran a government with virtually no checks and balances, and was the darling of the corporate sector. But as his failures mounted, the temptation to create diversions and play the politics of vote-banks proved irresistible.

This is the future an India under Narendra Modi must avoid at all costs.