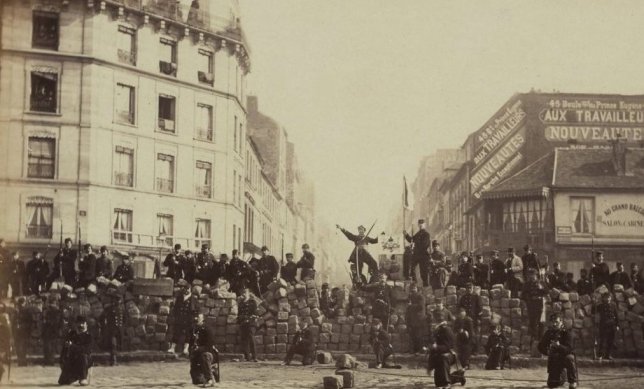 Saturday 1 May 2021, by Dimitrios Roussopoulos

‘Although we like to think in linear terms, history has its own cunning that carries us along strange and mysterious paths. Long forgotten, ‘defeated; movements and their ideals sometimes emerge with a renewed popularity unpredictable only the blink of an eye before. Victors may define history of an era in large type, but between the lines of the boldface script in textbooks or new programmes, a better sense of the future may be gleamed from the margins.’ (1)

The Paris Commune was, and in many respects still is the most important urban revolution in history. It is not possible to do justice to the Paris Commune and its significance in this short text. But it is desirable to welcome its being celebrated and remembered for the authentic popular uprising it was and to highlight a few among the many remarking and pioneering achievements attained during its short history. In France, there are over 50 major events taking place, from exhibitions to history walks and demonstrations. Noteworthy is the fact that the socialist mayor of Paris is front and center in many of these events, as is the city council which is financially supporting many of these events. Many similar events are taking place in Belgium and other European cities. In Montreal, sadly, very little.

There is also no point in drawing into this reflection and analysis the well-known comments of this historic character or that. Instead, much contemporary research, which is useful to recall, is based on the comments of the surviving participants of the Paris Commune. Such a fresher approach can help us gain a more comprehensive overview of this monumental event of 1871. In this essay I draw from these survivors.

The social revolution began with the attempted takeover of the canons of Paris, (which were there through public subscription) by the military of the Versailles government which had already withdrawn from the city. Before leaving they had suppressed all radical newspapers and periodicals. They ceased paying the National Guard of the city. Paris which had 20 arrondissments had a concentration of these canons in the district of Montmartre in particular. This was a working class district and one of the first Communards, Louise Michel immediately sprang into action, and described what happened, ‘It was an ocean of humanity, but there was no death, because the women threw themselves on the canons, and the soldiers refused to turn on the crowd’. The military general commanding his troops ordered the removal of the canons and to shoot at the people. Instead he and another general were killed by their soldiers. This beginning on the March 18, 1871 began the process leading to the Paris Commune.

Unfolding into the month of March was a situation of dual power. First between the National Guard of Paris and the national government based in Versailles. Even though the National Guard at one time was largely of bourgeois origins, it now became very working class in its makeup. The rich had left the city in the winter, leaving the workers armed in the National Guard.

While the Commune took shape, the material conditions of the people of Paris also became stark. The city was cut off from much of the outside world. Nevertheless, the ruling class was now more terrified of its own working class citizens than it was of the Prussian army with which the Versailles government in particular were locked in war. And for good reasons. The National Guard had democratised: officers were elected, there was instant recall put in place, and there was no extraordinary pay for senior staff. These steps became a basic foundation for a workers’ democracy. Thus began a process of democratization affecting most aspects of daily life. The arrondissements were permeated with clubs of all sorts, especially revolutionary political clubs. Many of these clubs nourished the thirst for direct democracy, and helped sustain working class unity. These two features were bound together.

“Ambulatory orators helped revolutionary clubs to federate with each other, in the now familiar structure shared by all of the embryonic organisations that preceded the Commune but which were in many ways indistinguishable from it. That structure, a kind of decentralized federation, of local, independent worker-based committees organized by arrondissement, had been adopted by the Paris section of the International, some 50,000 member strong in the spring of 1870. It was also the structure of the National Guard, which had, by that point, in effect ‘federated itself’. (And) There is the larger struggle of the Revolution, in the form of the free union of autonomous collectives, against the state.” (2) The people were thus mobilised and armed. They saw all governing institutions as servants of the people. The people were clearly tired of saviors. The revolutionary clubs took over the churches throughout the city where they held their public political meetings.

The National Guard Central Committee, the arrondissement mayors, and the Parisian deputies instituted self-rule for Paris, and announced city-wide elections. On March 28 the Paris Commune officially came into existence. The newly elected municipal council was inaugurated at Hotel de Ville, and began to undo the decrees of the National assembly.

Our Flag is the Flag of the University Social Republic

The Paris Commune sought almost immediately to separate itself and its political culture from the national narrative. It was one of the boldest and audacious acts of internationalism. The Commune welcomed all non-French born citizens, from Algerians to Poles to Hungarians, many of whom took active parts in building the new society. Indeed, it refused to be identified as the national capital of France, instead it sought to be one commune amongst others, federated together with other communes in a universal federation of people. Even though there are important testimonials of this sense of solidarity, there is little recognition by historians of this phenomenon. Of course this internationalism was particularly detested by the ruling class which had tried to use xenophobia to divide the working class. Nationalism broke down during the military attack of the Prussians and the abandonment of the National Army as it was marched away from Paris.

Women’s oppression didn’t immediately disappear but women made important strides toward liberation in the new democratic context. Women played a central role in the development of all aspects of the Paris Commune. They were active in the Vigilance Committees and prepared to defend the barricades, as did Louise Michel and other women, with a rifle in hand. Women orators denounced the Paris government, and the National Guard for cowardice and ineptitude. They were cooks, water carriers, and medical assistants, accompanied the National Guard into battle. Women workers manufactured gun cartridges, uniforms, and carried sacks with sand for the barricades. The Commune was warned of the dangers of alienating women’s support. Elizabeth Dimietrieff and others of the First International founded the Union of Women for the Care of the Wounded and the Defence of the Commune.

While the Central Committee of the National Guard had instant recall, this was not yet the case for the Commune itself. The Commune was set up by the municipal elections which meant, women couldn’t vote.

Typical however was the policy of the National Guard so that when a provisional administration was established before the municipal elections their first proclamation stated:

“We are conscious of having fulfilled this mission: aided by your generous courage and admirable calm, we have chased out the government that betrayed us.

At this time our mandate has expired, and we yield it, for we don’t claim to be taking the place of those who a revolutionary wind has just overthrown.

So be prepared and carry out your communal elections, and as a reward give us the only one we ever wished for: seeing you established a true republic.

In the meanwhile, in the name of the people we remain at Hotel de Ville.”

The municipal elections elected a Communal Council of Jacobins, socialists, anarchists, and even some bourgeois who opposed the Emperor and his government. It is interesting to note that 233,000 citizens voted or 48 percent of registered voters. The working class districts voted on average from 65 to 77 percent, while the upper-class ones largely abstained. The ideas and proposals that flourished reached back to the revolution of 1789 and in particular that of 1792-93, and were also inspired by the revolutions of 1830 and 1848. The arrondissment councils and the political clubs therein were the undergird of the direct democracy, many of which were federated together, slowly building ties of solidarity and cooperation.

Due to the city being surrounded by hostility and the militant demands by the working class districts, sixteen elected representatives resigned from their posts during the Commune Council’s first meeting, as they were unwilling to participate in a structure that sought to operate at a level above that of a city council. This act led to the by-elections of April 16 and thereafter a more radical and coherent agenda took place within the Commune.

Paris, at two million people, was the second largest city in Europe, after London. The Council only met sixty days of the 72 days of the life of the Paris Commune so only a few decisions were actually implemented. However, these included:

These measures and others were primarily a reaction to the living situation in Paris. Beyond meeting these immediate needs, however, they were intended to pave the ways for the constitution of a social republic emanating from a social revolution shaped directly by workers and tradespeople that prioritized their interests.

The Commune’s council most revolutionary acts were the decrees designed to democratize the city’s organisational structures. These included the limiting both the compensation of the elected councillors and civil servants, an engagement that bears repetition. And these persons could be recalled from office at any time. While these and other measures covered a range of concerns, at the same time, they clearly set out how a community can be organised along properly democratic lines. Thus, as much of the citizenry as possible was able to participate in the shaping of the conditions under which they lived. In this respect the most important measure enacted by the Paris Commune was how it functioned. The measures we should agree, (let’s recall the year was 1871), are amongst the most revolutionary. Those decrees and demands introduce almost complete popular control of a civic administration. They lead to the creation from below, of a completely new kind of social organisation. And it worked reasonably well during its short life, with a standing army banging at the city’s gates.

Each time we study the history of the Commune we see something new in it, thanks also to the experiences gained, in later revolutionary struggles. For current radicals need to pay attention to the underlying anti-bureaucratic mood of the people, ready to break out under certain circumstances. A serious study of the Commune requires a very serious study of the citizens of Paris and their capacity to create a new society. This kind of history shows that this capacity more than just a leadership can carry history forward.

On May 27 and 28 ,1871 as we know thousands of Communards, women and men were murdered by the army of Versailles. As many were arrested and sent of the French New Caledonia penal colony in the Pacific. One of these was the anarchist Louise Michel. She survived and eventually returned to France and London to carry on her revolutionary work without stopping. She died on January 9, 1905, convinced in as reflected in her last words that revolution would break out in Russia, and so it did, that same year.

When her body was brought back to Paris, some 300,000 citizens marched in its streets singing the forbidden “Internationale’. “Men, women and children, clustered on the balconies, the roof, and against the walls: ‘This will be something to remember,’ ‘There’s been nothing like this since Victor Hugo’s funeral.’” (3)

In Paris, the history and the aspirations are still present. There is the metro station, named after Louise Michel and there is Place Louise Michel.