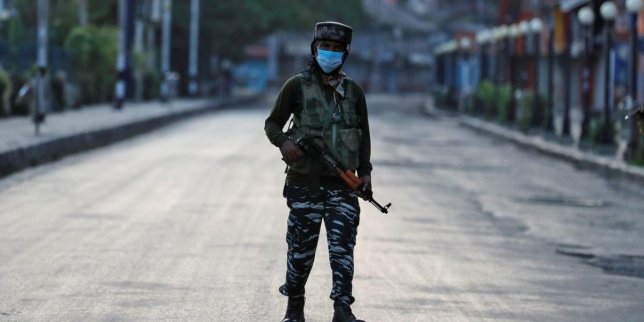 The past year under the BJP has helped us in Kashmir to grasp, up close, what an attempt at total political domination looks like.

On August 5, 2019, the Narendra Modi government revoked Jammu and Kashmir’s special status and statehood, dividing it into two union territories.

It is vital to remember the moment that gave birth to the past twelve months in Jammu and Kashmir if we are to understand how it has redefined India, yet again, for itself and the world. The effect on the erstwhile state’s three constituent units on this side of the Line of Control (LoC) has been diverse and will take some time to grasp. But immediately speaking, Leh celebrated with drum and dance. Kargil debated meaning and implications. Jammu city partied but its hinterland was nervously split. Kashmir saw it as more of the same, but with a difference.

But the beginning, for everyone, even after a year, remains raw.

For Kashmir, reminding ourselves of the morning of August 5, 2019 is difficult.

At the stroke of midnight between the 4th and the 5th, all mobile phone, landline and internet connections were cut off. The silence was a physically felt phenomenon, not mere absence of sound. It was unnerving and eerie. Usual morning routines became unusual. It is difficult to articulate how that felt. No access to news, after weeks of rumours, was the least notable fact. It is easy to know that you are alone but to feel it is a gut-wrenching experience.

As the day progressed, more facts became apparent. Heavily armed paramilitary and army personnel manned every significant street corner around us. The streets and lanes were empty, the traditional baker and corner shops shut tight. The only civil voices and activity allowed by the military were that of terrified non-Kashmiris moving towards the airport and road transport centres, clamouring to get out. There was a menacing stillness in the air.

By day’s end it became clear that the government’s military operation was a manoeuvre planned over months, executed with precision and intended as a sledgehammer. Slowly, the meaning of what seemed “routine” developments of the past two months past began to sink in: the plane loads of additional troops disgorging themselves on the tarmac of the already most militarised zone of the world; the fortification of nodal military bunkers the Valley’s vital arteries; the quantitative leap in the number of bunkers (on just one 15-kilometre stretch of the highway they increased from 12 to 22 in a matter of days).

Suddenly, it became clear why private airlines were announcing that the ground transport for Amarnath pilgrims would have GPS devices; it was a message implying imminent violence. On a flight from Delhi to Srinagar on June 22, the cabin attendant made the usual announcement that photography was not permitted at Srinagar airport, but intensified it by asking passengers to “Please report about (sic!) anyone taking pictures”. Delhi’s intentions were fuelled by the street buzz that it was willing to absorb at least five thousand civilian deaths in case of protests.

Kashmir is familiar with this military tactic. Psychological operations, or “psy-ops”, have been in play for thirty years here. But the clinical phrase veils the true purpose and intended consequence of this soft technology: namely, to introduce, in Michael Taussig’s words, an “epistemic murk” to dominate a population, “making the terribleness of death squads, disappearances and torture all the more effective in crippling of people’s capacity to resist.” To try to make the dominated doubt that they know right from wrong, good from evil or, indeed, anything at all.

To remember August 5 minutely is to be catapulted into understanding that the BJP operation in Kashmir was not merely the ‘failure of democracy’, a skirmish between priestly and secular politics in India or an argument between the virile modernity of unending development and an impotent past of fake idealism. It is not the runaway basic social urge towards irrational capital formation, as Marx argued, or deeply subconscious sexual desire, as Freud posited.

The past year under the BJP has helped us in Kashmir to grasp, up close, what an attempt at total political domination looks like. Bertrand Russel warned us about this impulse to power, almost a hundred years ago, by making a distinction between conventional state power and “naked power”. The latter, he said, “involves no acquiescence on the part of the subject. Such is the power of the butcher over sheep, of an invading army over a vanquished nation, and of the police over detected conspirators”. He goes on to clarify, more woodenly, that “The power of the State over loyal citizens is traditional, but its power over rebels is naked.”

Russell’s distinction is important for India’s “loyal” to understand because, in Kashmir, it is the “rebel” who is ubiquitous, making the deployment of naked power seem the norm.

II: From one trouble-spot to five

On the ground, both locally and internationally, the government’s claim of a successful J&K policy has been a short-lived victory. Leh, Kargil and Jammu have all become increasingly skeptical about the BJP’s August 2019 action as nativist land privileges, livelihood opportunities and culture conservation are threatened, respectively, by central territorial control, corporate carpetbaggers and the threat of a project of social homogeneity.

On the one hand, the validly insecure Buddhist population of Kargil and Leh, passionately devoted and vocal about their identity, is rapidly discovering that the Hindutva project of the BJP is not aimed exclusively at Muslims. On the other, to the Muslims of Leh and Kargil the BJP’s August 2019 action is confirmation, in praxis, of Muslim fears in India. A litmus test of cross-community emotions about this effect will be administrative “orders” like the one on July 20 for the “Deputation of officers/officials to the Union Territory of Ladakh”. It has affected Buddhists negatively, a sentiment which, sooner or later, will surface. Meanwhile, on July 24, students in Leh and Kargil observed a shutdown against “grave” discrimination in government employment, highlighting restlessness among the youth in both districts.

Concretely, what Leh and Kargil have realised is that while it was a Congress Central government, during governor S.K. Sinha’s rule that rammed through the Ladakh Autonomous Hill Development Council (LAHDC) in 1995, it was the PDP-led State government that empowered the LAHDC, today a lame-duck institution, in 2003. In Jammu, the primary threat perception of the BJP’s policy is different. It is one of the loss of trade privileges thus far reserved for intra-J&K state businesses. These developments should offer a fresh perspective on the maxim that “all politics is local”.

In Kashmir, the centre of the J&K political conundrum, the methods of arbitrary lockdowns, lockups and legalistic exclusion have been practiced unbroken throughout the year, with sporadic letups, releases and reversals to allow the government to claim that its throttlehold has not been endless. New domicile rules, the forced facilitation of settlers in the Valley, deprivation of resource access to locals (ranging from silt for construction purposes to any relief for local businesses adversely affected by the year-long lockdown) and other ground shifting changes have become the norm. However, despite the government’s confidence that these actions will bring Kashmir to its knees, the combined mood of all the peoples of the former state augurs a period of rocky relations in the region for the BJP and, in the longer run, for India.

What the past year has achieved for the government is that whereas Delhi had one trouble spot to deal with in its [former] J&K state, it will henceforth have five very different political facets of worry to contend with in Kashmir, Leh, Kargil, Jammu’s city and its rural districts. The domestic problem within India is best summed up by the law of physics that pithily describes the scenario: when centrifugal forces are accelerated, it releases centripetal energies.

What is undeniable is that while the BJP’s credibility appears to remain in place domestically, its international reputation wanes. For the Kashmiri, it calls for a leap over South Asia to address the international community.

Ironically, India’s fading self-propagated image of itself as the world’s democratic hope against authoritarian China is arguably a direct result of New Delhi’s attempt to deny the Kashmir dispute. The February 14, 2019 attack in Pulwama and Balakot retaliation in March resulted in India’s intelligence and military capabilities being open to criticism. The hubristic claims during that February-March 2019 confrontation became the reason for the August 5 action which, in turn, has inarguably allowed Beijing to insinuate itself into the J&K dispute by making vulnerable India’s de facto vantage points in Daulat Beg Oldie, Siachen, the Galwan Valley and its portions in the Pangong Tso area.

Meanwhile, China’s response to India in trans-Himalayan Ladakh have considerably diluted or weakened Delhi’s claims over China’s de facto occupation of the Akasi Chin, the Shaksgam valley and its hefty decade-old presence in J&K’s Gilgit-Baltistan.

Not helping this southward trend is scathing criticisms of India’s human rights record by the United Nations Office of the Human Rights Commissioner in 2018 and repeated in 2019, and the April 2020 report of the United States Commission on International Religious Freedom recommending that Washington “designate India as a country of particular concern, or CPC, for engaging in and tolerating systematic, ongoing, and egregious religious freedom violations, as defined by the International Religious Freedom Act (IRFA)”.

Recognising these shortcomings may not directly impact rights violations in Kashmir yet, but it should help to spur hopes for an opportunity to catch its breath.

To catch its breath and, as it must, contemplate its future.

Siddiq Wahid is a historian and former vice chancellor. He is a native of Leh, now resident in Srinagar.