Home > English > NEWS AND ANALYSIS > The Marriage Of Arrogance And Ignorance - Modi’s Victory Could Unleash (...) 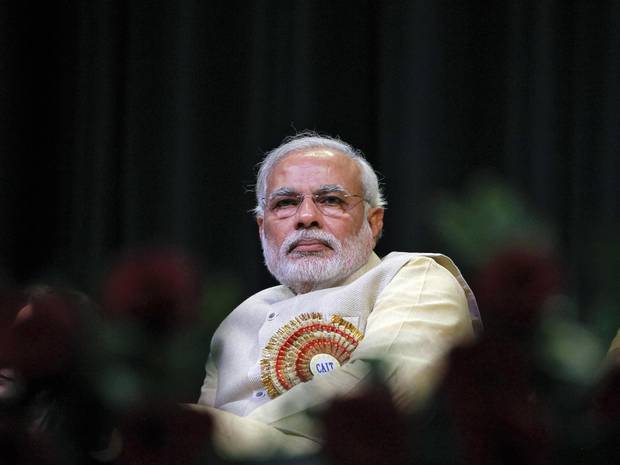 If a BJP-led administration does come to power in the current election, democratic and progressive institutions are likely to face attack on two fronts. One line of attack would be directed by Modi as the Prime Minister and his cabinet. The other would most likely be undertaken by Hindu outfits like Rashtriya Swyamsewak Sangh (RSS) Vishwa Hindu Parishad (VHP), Bajrang Dal, Shiv Sena and other Hindutva organizations

During the run-up to the elections, Modi betrayed his ignorance of many facts of history. He claimed Alexander the Great was buried in Bihar, confused Shyama Prasad Mookherjee with Shyamji Krisha Verma, said that the ancient Takshashila University was in Bihar when he should have known that it was in Taxila (now in north-west Pakistan), kept on repeating that the historic ’Quit India’ call in August 1942 was given from Gandhi’s Wardha Ashram when it was in fact issued from Bombay’s Gowalia Tank (now called August Kranti Maidan for that very reason), and so on. Inability to demonstrate elementary knowledge of historical facts, which a grade school student should have known, is no doubt highly troubling in someone who aspires to the highest political office in the land. Far more sinister, however, is his arrogance that reveals what India is in for in an administration run by him. He has steadfastly refused to even utter the smallest word of apology to the 2000 Gujarati Muslims killed in the pogrom in 2002. Instead he compared their fate to that of a stray puppy caught under the wheels of a car. It is difficult to imagine a more insensitive or arrogant mind-set than shown by this remark of Modi, who serves as the perfect example of ignorance allied to arrogance.

The man Modi resembles most is Hitler, who was also celebrated in his time as a straightforward, non-corrupt, magnetic leader not interested in accumulating personal wealth but deeply devoted to providing Germany with an efficient administration that would greatly improve the lives of the majority of the German people, while putting a few obstreperous minorities such as the Jews in their place. The media propaganda surrounding fascist politicians is eerily similar. Strong, nationalistic, efficient, clean, non-corrupt are some of the attributes most tossed about; on the other hand, qualities such as thoughtfulness, or having empathy for minorities and the poor are viewed as weaknesses. In Modi’s case, the frequent reference to his 56-inch chest size clearly shows what image is being projected.

As happened even during the “moderate” Vajpayee-led NDA regime, there were a number of attempts at the Central level, to foster a program of Hindu homogenization of Indian society in the areas of educational institutions, the government bureaucracy, and the security setup. It is very likely that intensified efforts will be made to rewrite school history textbooks, and infiltrate RSS-minded officials or cadre into the bureaucracy and police as has already happened in Gujarat, the state usually dubbed as the “laboratory” of Hindu Rashtra. No doubt if Modi and his henchmen come to power, programs pushed by RSS such as Ghar Wapasi, which aims to Hinduize tribals, may receive government support, and, under the cover of “development,” minorities will be subjected to an accelerated effort to accept Hindu symbols, like singing Vande Mataram in schools, or become second-class citizens.

While a Modi-led regime may initially refrain from directly attacking minorities or the left and secular organizations, its actions are more likely to be seen in Kashmir, where BJP insists on removing Art. 370, in the tribal areas and in the north-east. Voices demanding enquiry into the Gujarat anti-Muslim pogrom might be silenced. Progressive media could be forced to become less vocal than it has been during UPA (United Progressive Alliance) rule. There might be fewer protests and Jantar Mantar might become less vibrant than it had been in the past. Progressive journalists might have to exercise some caution. It would something like what prevailed in the U.S. during McCarthyism.

But the real danger comes from hoodlums of the extreme right-wing fascist Hindu outfits. They are already taking of building the Hindu nation and their belligerency would be like it was in the time of the demolition of Babri Masjid and in the many anti-Muslim riots they led. The Hindu nationalist cadres feel empowered when BJP is in power as they receive patronage from the government at many levels, and state resources are made available to them. They become bolder and less accountable to law. The multiple enquiries now ongoing into Hindu terror attacks, like the bombing of the Samjhauta express, Sadhvi Pragya Singh Thakur’s alleged involvement in planting bombs in Malegaon in 2008 and many other places, and the bomb blasts in Ajmer and Jaipur, could very well be scuttled and forgotten as these acts may receive covert approval by the new regime.

Hopefully, this nightmare scenario may not come to pass; if it does, one could anticipate that these fascist practices would lead to a cultural rebellion that would lay the foundations of a secular culture in a manner similar to what happened after the overthrow of German and Italian fascism.