Home > English > NEWS AND ANALYSIS > The Left Is in Grave Danger 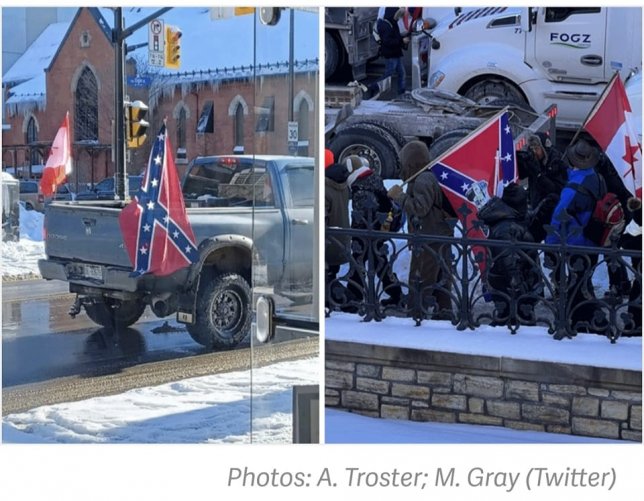 The Left Is in Grave Danger

As we enter Day 5 of the so called "Freedom Convoy’s’ siege of Ottawa it is alarming to see so many Canadians buying into the agenda of the organisers of this protest. On the surface it appears to be a protest by working class truck drivers fed up with government mandates requiring them to be vaccinated before coming back into Canada from a US road trip. That issue has resonated with another group of folk who have been out protesting lock downs and other public health measures such as masks and proof of vaccination programs. This latter group is egged on and supported by Maxine Bernier the leader of the far right People’s Party of Canada (PPC).

Roll back the clock to 2019 when the ’United We Roll’l protest of allegedly pissed off working class oil and gas workers drove their rigs to Ottawa to protest Trudeau’s lack of support for the industry and so called Western alienation. The protest was a bust with few participants but turns out it was basically a dry run for the Freedom Convoy.

What’s important to note is both the Freedom Convoy and the United We Roll Convoy were organised behind the scenes by the same people and organizations, namely known racists, Islamophobes, antisemites and far right organisations such as Canadian Yellow Vests, Diagonal Network, Pat King, Tamara Lich and BJ Dichter. Each of these individuals and organisations have well documented histories of racist views and comments. (AntiHate.ca)

The common denominator of both protests is that these racists and bigots have very cleverly appropriated and twisted the language of the left to fit neatly into their sick agenda and wrapped it around the grievances of working class truck drivers and oil rig workers. The media lapped it up and afforded them wall to wall media coverage for days on end. The media failed miserably to conduct a smidgen of investigative journalism into the history and agenda of the protest organisers and so the public was fed a steady stream of misinformation over several days prior to the protest.

Very soon after the mob descended on Ottawa the racists and antisemites showed their true colours as they paraded around the city with their upside down Canadian flags emblazoned with swastikas, confederate flags and defacing national monuments. The apologists in the media who had utterly failed to present the real politik behind this protest were tripping over themselves to dismiss the open displays of hatred as just a" few bad apples". The CBC and CTV in particular covered the protest 24/7 for several days with numerous reporters positioned throughout the mob. I don’t believe there’s ever been another example where known racists were given so much favorable and free publicity to spread their hatred. Shame on our national media.

As a former union leader I have to ask where the hell has Canada’s labour movement been during this pandemic? The almost total silence and invisibility of the movement and the left in general has created a vacuum into which the racists and bigots gleefully marched. Where were the counter protests to the fascists, why have we only heard from the trucking industry employers and not the Teamsters nor the CLC? In Chicago school teachers refused - on health and safety grounds - not to open up the schools until their safety concerns were addressed . Why didn’t we see similar protests from school teacher unions in Canada? Why did the labour movement continue to fart around with governments who refused to provide the appropriate amount of sick days and protective equipment for workers instead of taking concrete actions like the teachers did in Chicago? When will union leaders call out the working class traitors who sidle up to Trudeau, Ford and their ilk and confuse union membership into falsely believing these characters are supportive of workers’ rights. If Ford was a friend of workers they would have 10 sick days a year already and a universal daycare program as just two examples. The labour movement is in grave danger of being overrun by the politics of the far right just like workers in the US flocked to Donald Trump’s message. They had better get off their collectives arses and start organising at the grass root level otherwise we will be faced with Prime Minister Maxine Bernier.

To summarise, the media’s failure to expose the real agenda of the racist organisers of the convoy coupled with their effusive wall to wall coverage over several days has left the country with an extremely well funded far right fascist organisation who will be prominent in Canadian politics for years to come. The Canadian left and especially unions will find themselves battling these elements within their own ranks especially by those who’ve been emboldened by watching ordinary Canadians waving from highway overpasses at a convoy organised by known racists, Islamophobes, antisemites and fascists.

The future is not looking good.