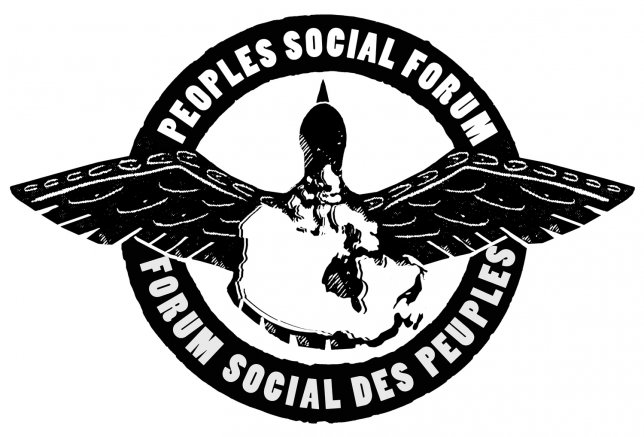 The Future of the Peoples Social Forum

The next World Social Forum (WSF) will be held in Montreal from August 9 to 14. This WSF will be crucial as it will provide to the WSF International Council an opportunity to advance the necessary discussion about the future of the WSF, a process criticized both from the outside and inside and that appears more at the crossroads. The debates that will be held in Montreal on this issue will be essential, but for social movements from Quebec, Canada and First Nations, it will not be the only issue.

In fact, between 2011 and 2014, social movements here began an historic process of reconciliation between progressives from all three communities. This unique process in the Canadian state has created new bridges between labour and students unions, women’s groups, intellectuals, citizens’ associations and others, both from Quebec and Canada and with representative from several indigenous communities mobilized since the very beginning of the initiative. The well-known activist Naomi Klein had then called the People Social Forum (PSF) the "Most important gathering of social movements in Canada since the Summit of the Americas in April 2001".   Re-launch the Peoples Social Forum

As the processes of social forums cannot be competitors, the mobilization around the World Social Forum in Montreal has inevitably put the process of PSF on ice, for a while at least.

But challenges remain. The Conservative government is no more, but neo-liberalism with a Trudeau sauce is less different than the selfies of the Prime Minister are suggesting. The Canadian alliance with oil and mining companies continues. Justin Trudeau has not withdrawn Bill C51 law that allows mass surveillance. Canada Post has not been saved. First Nations communities continue to suffer without access to clean water. Canada continues to sell billions in arms to Saudi Arabia while denying the human rights of Palestinians. Justin Trudeau even tried to criminalize people here who wish to support the international campaign of boycott (BDS) against Israel. The list could be long and it is clear that if we won a round against Stephen Harper, much remains to be done to bring forward the society we want.

In August 2014, following the PSF, all agreed on the need to create new bridges and strengthen the ones we built in the PSF. Beyond our obvious solidarity, it was actually the objective to create an alliance between First Nations, Quebec, Canada social movements than can play a role against the political policies that our governments put forward. We then had the dream to build a force capable not only to overthrow the Tories but also to finally force other parties to really stand out and offer progressive real alternatives. This goal still stands.

The PSF will hold in Montreal its next General Assembly on August 8, just before the opening of the WSF 2016. The 30 months process that had lead to the event of August 2014 has opened big doors and built fundamental trusts among the movements and the people of our three communities.

It is imperative that we choose to pursue and invest in this process. Building a movement of movements in Canada must certainly be based on this work in progress with alliance between progressive forces in Quebec, Canada and First Nations.