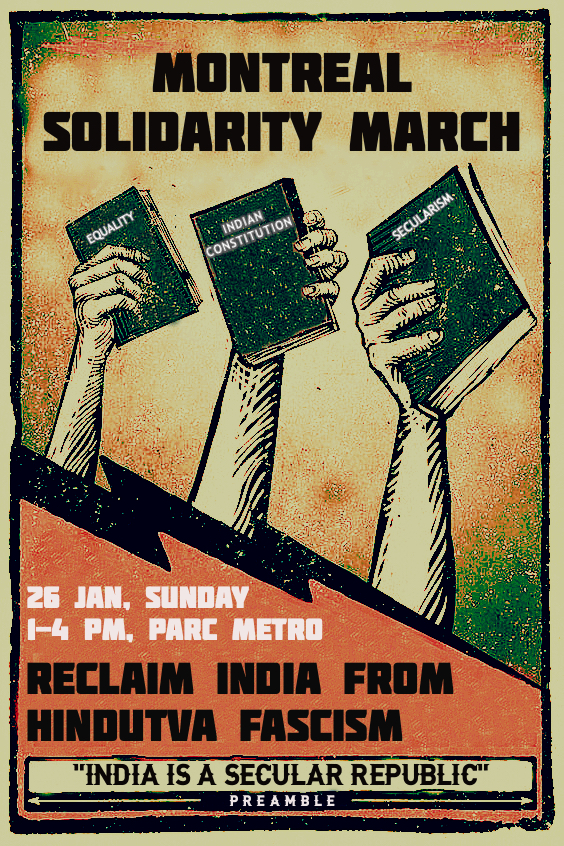 On 26th January 2020, Republic Day in India, we, the residents of Tiohtiá:ke (unceded Indigenous territory otherwise known as Montreal), will join people around the globe who stand in solidarity with millions across India fighting for democracy and secularism and against Hindutva fascism. Republic Day is rich with symbolism because on this day in 1950, India, newly free from over two centuries of British colonial occupation, became a republic and adopted its constitution, a forward-thinking, radical document that is sacrosanct for Indians because it reflected a multifaceted freedom struggle and laid the foundation for a just, egalitarian, pluralist and secular country. And it is now under attack.

Repression against Muslims, Dalit-Bahujans, human rights activists, journalists, and others by the Hindu ethnonationalist Bharatiya Janata Party (BJP) government has been occurring since they came to power in 2014. But the pace and the nature of repression has intensified since May 2019 when Narendra Modi and his party won a second term. Using their parliamentary majority, they have rammed through legislation to advance their agenda, tearing apart the pluralist fabric of India in an attempt to make India Hindutva, a Hindu ethnonationalist state. The BJP has repeatedly alienated and negated Muslims in India (201 million, 15% of the population). On 1 August it passed an amended divorce law targeting Muslims; on 5 August they unilaterally, without input from those directly affected, abrogated section 370 of the Constitution which guaranteed special status for Muslim-majority Indian-administered Kashmir and subjected the population to mass arrests, detention and an internet blackout. On 11 December they passed the Citizenship Amendment Act (CAA), by which religious minorities of neighbouring countries can acquire Indian citizenship, while explicitly excluding Muslim refugees (ominously referred to as “termites” by Home Minister Amit Shah) and Sri Lankan Tamils refugees from its purview. The CAA followed the broader implementation of the National Register of Citizens (NRC), which has already identified nearly two million people as non-Indians. They have been, ripped from their homes and taken to detentions camps, more of which are being built for this purpose. In a country where traditionally, possessing documents that prove citizenship may be haphazard and is not universal, this has generated widespread panic. And they have ended reserved legislative seats for Anglo-Indians a Christian minority in the country. Muslims, Dalit-Bahujans, Indigenous people and the poor in general are the most adversely affected. In addition on 9 November the Supreme Court cleared the way for a Hindu temple to be built on the site of the 16th century Babri mosque, demolished in 1992 by Hindutva mobs. Genocide Watch has put India on its watchlist. At the same time, the economy has witnessed an unprecedented slowdown, in large part due to policy misjudgments of this government. Tens of millions of jobs have been lost as a result and the poorest face an unprecedented crisis of livelihoods.

While the government’s strategy is to garner support by Othering Muslims, people are refusing to allow this to happen. They see through Hindutva fascism and its unprecedented attack on India’s Constitution and secular identity. They have come out in massive, country-wide protests to refuse the government’s fascist policies and resist the attack on India’s Constitution and its secular identity. Often led by women, students and youth, the nation-wide resistance includes urban and rural people, from all walks of life. 8 January saw the largest ever nationwide strike in which 250 million workers participated. Even long-standing BJP supporters are wavering. The government has been blindsided by the scale of the popular resistance and they have used state apparatus, state agents and political appointees in public institutions to crack down brutally on the protests, including with the use of live ammunition. Students at Jamia Millia Islamia university and Aligarh Muslim University were very brutally attacked by police. Students at Jawaharlal Nehru University were viciously assaulted by goons belonging to the BJP’s student wing. And students’ solidarity protests across the country have also been attacked. In Uttar Pradesh, manifesting the fascist nature of the state, without cause, homes of Muslims were invaded by the police who attacked the people living there focussing on the youth, smashed the contents of their homes and caused life-threatening injuries and death.

Across the country, as a result of action by state players or their mob supporters, at least 31 people have been killed and many gravely injured. The government has been using social media, its corporate media cronies, and its vast army of trolls to spread fake news and doctored images, to attack, intimidate and harass journalists and private citizens. This in addition to imposing internet shutdowns and the implementation of colonial-era laws to quash dissent. But people are finding new and ingenious ways to undermine, bypass and counter this in a developing culture of resistance.

Democracy is under threat in India. What happens in India has ramifications across the region and will reverberate around the world. This on-going struggle and resistance of the Indian people is nothing less than a fight to protect the soul of the nation and its democratic and secular principles. They need support and solidarity and protection. We strongly urge the Canadian Government to do what it has done in other instances – to convey the deep concern about the situation to the Indian government, and use all channels available to it to ensure that human rights of protestors and those who dissent are not violated. And we call on everyone to stand with Indians who are putting their lives on the line to protect marginalized peoples, their constitution and the world’s largest democracy.

In a march organized by the umbrella organization India Civil Watch-Montreal (CERAS participates in it) the streets rang out with the call "Azaadi" as slogans denounced the draconian CAA (Citizenship Amendment ACT) and NRC (National Register of Citizens) and abrogation of Section 370 of the constitution on this highly symbolic day, when independent India adopted its constitution which is under dire threat — the document which hold the promise of substantive equality for Indians irrespective of community, religion, etc.

Parallels were drawn between what is happening in India and Bill 21 in Quebec which imposes fundamentalist secularism in effect denying equality of opportunity to minorities, in Quebec, especially Muslim women.

To remember the solemn promise of the constitution all those gathered said aloud, in unison those very prescient words:

WE, THE PEOPLE OF INDIA, having solemnly resolved to constitute India into a SOVEREIGN SOCIALIST SECULAR DEMOCRATIC REPUBLIC and to secure to all its citizens JUSTICE, social, economic and political; LIBERTY of thought, expression, belief, faith and worship; EQUALITY of status and of opportunity; and to promote among them all FRATERNITY assuring the dignity of the individual and the unity and integrity of the Nation; IN OUR CONSTITUENT ASSEMBLY this 26th day of November 1949, do HEREBY ADOPT, ENACT AND GIVE TO OURSELVES THIS CONSTITUTION.