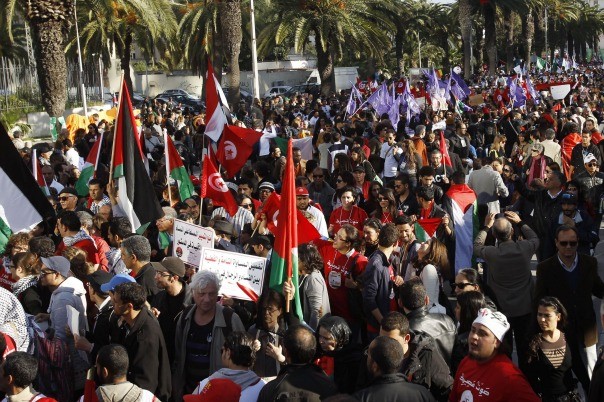 While expressing support for the idea of eventually holding a World Social Forum (WSF) in Montreal, the board of Alternatives nonetheless spoke out against the project to hold one in 2015. This was in order to protect the mobilization for Peoples Social Forum (PSF) in 2014, which enjoys significant support from civil society organizations in Quebec, Canada and the first nations. In this context, we welcome the decision of the International Council of the WSF to recognize Tunisia as a new site for the next WSF in 2015. But at the same time, the IC also began to consider a new WSF in 2016, recognizing that Montreal could be a host, possibly in a polycentric model with India.

This decision of the IC is not a definitive one. This decision, as far as Montreal is considered, depends on the success of the PSF in 2014. It is then for us to overcome the issue of dispersion of forces and focus on this first event that is the PSF 2014.

The need for a broad consensus

Alternatives always wishes and continues to do so, that an eventual WSF be held in Montreal. We have always worked and wished for every WSF to be a success since the first one held in 2001 in Porto Alegre.

The contribution of WSF in the development of a social and political alternative at the global level, as a counterpoint to neoliberal orientations expressed by the Davos summit, is of primary importance for social movements around the world. However, such gatherings require a major mobilization of social networks and an unequivocal commitment of organizations and social movements.

To organize a WSF in Montreal in 2016, it is essential to achieve broad consensus and a common position in the movement. We do not find that such a consensus exists for now and we might be able to further evaluate this in the light of the experience gained with the PSF 2014.

Requirements of the WSF and the influence of the IC

We are pleased that Montreal is considered as a possible option for holding a WSF. However, the decision of the IC is not a confirmation, especially when the event is 30 months away. Not only it is conditioned by the development of the mobilization for the PSF in 2014, it must also be reconfirmed thereafter.

In addition, the Council provides no resources and it is upto the host organizations to ensure the financing of such an event. Therefore, we consider that the real test will remain for the civil society organizations to secure funding.

The idea of a WSF in Montreal was developed for the first time when it was proposed to hold it in 2013. Alternatives had promoted this idea in the IC but finally joined other members of the IC and rallied behind the idea of holding it in Tunis instead. We all experienced the great success of the WSF-2013 and hope it will repeat in 2015.

During this period it was the consensus of a large majority of civil society organizations in Quebec that came forward with the project of building a Quebec-First Nations-Canada Social Forum, which today has taken the form of People’s Social Forum. Since then, the necessary consensus required to make the project a success are being concretized at all levels including democratic functioning, organizational, financial and technical.

To hold the PSF in August 2014 is unavoidable. It already involves more than 50 progressive organizations from Canada, Quebec and indigenous communities. The event itself is aiming to bring together over 10 000 people making this a unique and a historic event in Canada. Nothing close to this has been accomplished in the past. The People’s Social Forum is aiming to construct a real pan-Canadian extra-parliamentary opposition to the austerity measures being imposed by the present federal government.

Like the International Council of the WSF, we believe it is essential that all forces come together to make the PSF in 2014, a success. This is a prerequisite to seriously consider any proposed WSF in 2016. The World Social Forum in Montreal in 2016 will only exist if the Forum in 2014 would bring its actors to consider the project of a WSF as a lever to go further. However, one should also check the political conjuncture at that time, because the mobilization could also be build through other channels, including one that will be marked by the election period.

Based on the assessment of PSF in 2014, it will not be too late to plan the holding a WSF thereafter. If consensus exists and that political conditions are favourable, we will be among the first organization that supports the International Council proposal to hold the WSF in Montreal post-2015.