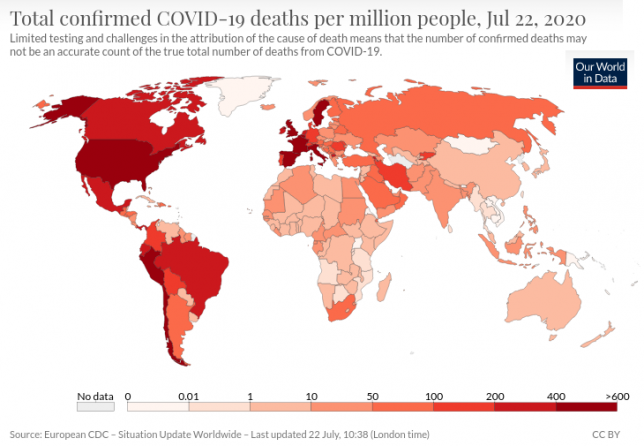 Two recent developments in the US seem to capture just how the destructive profit-driven irrationality of capitalism renders it incapable of effectively containing the present global pandemic. On July 10, the US recorded a staggering 70,000 new coronavirus cases in a single day, and Florida saw 11,433 cases, with 435 more people hospitalized. The next day, the reopening of “The Most Magical Place on Earth,” Disney World, began in that state. Admission tickets for the four theme parks are already sold out for the month of July. Meanwhile, across the country in Los Angeles, it is reported that the factories used to produce face masks for front-line workers, under the ‘LAProtects’ initiative, have become a major source of coronavirus infection. The low wage sweatshop conditions that the mainly migrant workforce have to endure have proven deadly. Three factories have been closed after three hundred contracted COVID-19 and four died.

Rob Wallace has pointed out that ‘pandemics are mirrors.’ This one has been generated by capitalist conditions of food production, and its impacts are determined by a system in which human and social needs are subordinated to the interests of profit-making. The concept of the ‘superspreader’ of the coronavirus has been developed in such a way as to conjure up images of reckless party-goers or selfish sun worshippers, but those who do the most to spread the coronavirus sit in corporate boardrooms and around cabinet tables.

On July 10, Dr. Tedros Adhanom Ghebreyesus, the director-general of the World Health Organization (WHO), said that the number of COVID-19 cases had doubled over the previous six weeks. “…in most of the world, the virus is not under control. It is getting worse,” he said. WHO is now aware of 11.8 million cases, and “more than 544,000 lives have been lost.” In offering this stark appraisal of a global catastrophe, Ghebreyesus was very clear that a “comprehensive approach based on fundamental public health measures” can bring the virus under control. Most tellingly, he stressed that the “virus has upended health systems in some of the world’s wealthiest nations, while some countries that have mounted a successful response have been of modest means.” The choices and priorities of those in political power are the decisive questions.

A recent CNN article, “The US is diving into a dark COVID hole – and there’s no plan to get out,” captured very clearly the disagreement that exists within the capitalist classes and political establishments on an international scale. The article expressed a liberal horror and disgust at the antics of the Trump Administration. It bemoaned the fact that “America’s competitors in Europe and Asia and the Pacific… have largely been more successful in suppressing infection curves.” It pointed to more solid efforts to stay in control, such as the recent imposition of a six-week lockdown in Melbourne, Australia. It is not that the interests that CNN speaks for are any less devoted to the flow of capitalist profits than the Trump Republicans. They are, however, somewhat more prudent and rational, and they understand that an uncontrolled ‘modern-day plague,’ with a wildly climbing ‘death curve,’ will bring the economy to its knees. They chaff at the course of reckless avarice that Trump represents because they fear it will fail on its own terms. No matter how ruthless the disregard for human life, the unchecked virus will prevail over any attempt to carry on with business as usual.

The course of the pandemic throughout the world is being charted according to this division between political jurisdictions that adopt reluctant but relatively effective measures of containment and those that show an utter disregard for public health. Though, of course, poor countries have much less inherent ability to control the virus, the WHO director-general is not wrong that many countries with ‘modest means’ have done far better than some of the richest. The effectiveness of the Indian state of Kerala in containing the threat has received international attention. The same can be said of Vietnam, which has controlled the spread of infection despite sharing a border with China. Laos and Cuba have also been extraordinarily successful in protecting populations from rampant infection.

On the other hand, countries trapped within the Washington Consensus face catastrophe. Latin America, as a whole, has now suffered 144,758 coronavirus deaths, but this tragedy is not spread out evenly. Jair Bolsonaro has presided over a horrible and needless loss of life in Brazil. Already by late June, half of the infections in Latin America had occurred in that country. Brazil’s death toll has now reached 72,151, with 1.87 million cases confirmed. Earlier this month, Bolsonaro “vetoed provisions of a law that obligated the federal government to provide drinking water, disinfectants, and a guarantee of hospital beds to Indigenous communities amid the COVID-19 pandemic.” An advocacy group says that this will “deny the minimum necessary for the survival of these communities.”

With its right-wing coup government, Bolivia is also seeing an appalling situation. Work crews in Cochabamba had to dig mass graves for COVID-19 victims after a local cemetery stopped accepting those who had died from the virus. In the words of Mary Ticona, a nurse who was interviewed during a protest, “We collapsed about two months ago. We are attending to our people as we can, in stretchers, wheelchairs, however we can attend to them. We have collapsed.”

Among those countries where global wealth is concentrated, there are also those who have failed to prevent the unchecked spread of infection. I need hardly stress that Boris Johnson’s Tories fit into this category. In Sweden, that other site of ‘herd immunity’ theory, those in power also have blood on their hands. It is, however, the epicentre of global capitalism, the United States, that stands out as the most extreme expression of a disastrous sacrifice of life in the interests of profits.

There have now been 3,225,721 confirmed coronavirus cases in the United States, and things are rapidly getting worse. Dr. Peter Hotez, the dean of tropical medicine at Baylor College of Medicine, recently warned that the reckless path being followed is leading to a situation in which “[we] will have hospitals overwhelmed and not only in terms of ICU beds and hospitals – and that’s bad – but exhausted hospital staff and hospital staff that’s getting ill themselves. So, we won’t have enough manpower, human power, to manage all of this.”

This prediction of an overwhelmed health care system is certainly in line with recent experience. On July 9, with no stay-at-home order issued, Houston-area hospitals saw 3,812 people admitted for treatment for COVID-19, with 1,000 placed in intensive care. They are running out of capacity and having to care for people in emergency rooms. Cases per day have doubled in Florida, and forty hospitals in that state have run out of room in their intensive care units. Horribly, there is a report from Arizona of a request for refrigerated vehicles so as to prepare for the possibility of morgues exceeding capacity.

Yet the Trump Administration remains obdurate and continues to do all it can to ensure states disregard the reality of a rapidly advancing public health catastrophe. As far as the President is concerned, scientific advice and medical opinion are simply discordant notes to be silenced or discredited. It has even emerged that Trump is making determined efforts to ensure that schools are reopened in September, even as he sits on a report from the Centre for Disease Control showing that this “poses a high risk of spreading COVID-19 and endangering the health of students, faculty, and parents.” On July 12, the Houston Chronicle printed an obituary section that was forty-three pages long. We may be sure that those people were disproportionately poor, Black, and Latino. Their deaths were all avoidable, and they are the victims of a death cult in the White House that takes the side of capitalism over human life.

In detailing this unfolding horror, it would be quite wrong to imply that resistance and mobilization are not also developing. A recent poll shows that an overwhelming majority in the US oppose the course that Trump is following. The Black Lives Matter protests, which have created a crisis for Trump and the entire US political establishment, are still taking to the streets protesting the fact that the economic burden of the pandemic lockdown has been placed on working-class people. As the reopening proceeds, it has been estimated that twenty-eight million in the US are living under the threat of eviction from their housing. This may well unleash a social struggle even greater than was set in motion by the police murder of George Floyd in Minneapolis. The period ahead is unlikely to be marked by shocked passivity and far more likely to see explosive social resistance.

John Clarke is a writer and retired organizer for the Ontario Coalition Against Poverty (OCAP). Follow his tweets at @JohnOCAP and blog at johnclarkeblog.com.