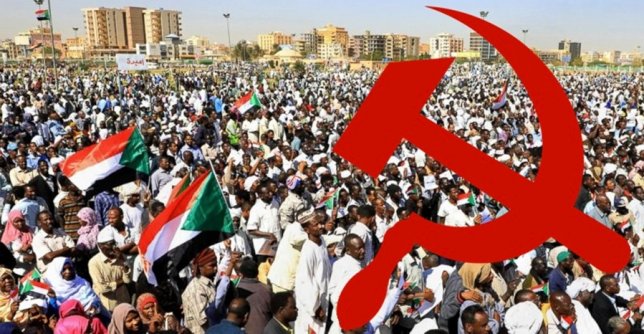 No Compromise on the Civilian Transitional Power

Wednesday 1 May 2019, by Sudanese Communist Party

The Sudanese Communist Party has declared its clear Stance: No compromise on the Civilian Transitional Power.

In a separate development, the Alliance for Freedom and Change stressed in a statement issued on the 29th April that "the Military Transitional Council (MTC) - the new copy of the old regime - is trying disperse the sit-in at the army HQ". It called on the participants at the occupation to stand firm, to reorganize themselves and defend their positions. Furthermore, it called on the masses in the capital to take to the streets and demonstrate against the MTC’s manoeuvres to remain in power and break the sit-in, and to join the occupation at the army HQ.

This call came in response to the MTC’s statement that the Alliance has accepted to end the siege of the army HQ.

The statement underlined the importance of continuing the mass protest actions all over the country until full power is delivered to the representatives of the people. In addition, the statement stressed on the preparation for launching the general political strike and the campaign for civil disobedience.

The Political Bureau of the Sudanese Communist Party issued a statement on 29th April saying clearly that the Military Transitional Council (MTC) is working to abort the revolution and impose its authority to continue the same policies of Al Bashir, to implement the project of soft landing in collaboration with foreign reactionary forces. Both are attempting to support and consolidate the internal counter-revolutionary forces. Their reluctance to enter into a serious dialogue, that leads to the transfer of power to the representatives of the Freedom and Change Alliance, will lead to another military dictatorial regime.

The main duty of all the patriotic forces is the protection of what has been achieved and the continuation along the revolutionary path to achieve the main goal: the eradication of the regime, its dismantling and liquidation. The first step in this respect is the immediate transfer of power to the people’s representatives.

The forces of the revolution must start preparing for the stage after the victorious sit-in; that is the launching of the political general strike and the campaign for civil disobedience.

Victory to the people!