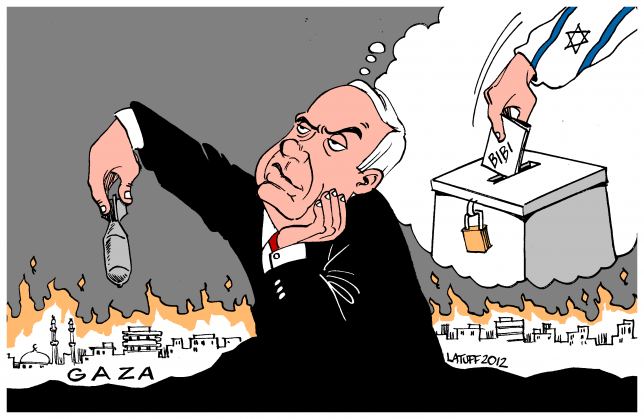 On Tuesday, the Second Republic of Israel was born. It will be different from its predecessor. The First Republic chalked up impressive achievements, accompanied by lies and deceptions. The Second Republic will dispense with any pretense.

The new Israel will no longer use disguises. When the ninth Israeli prime minister puts together his fifth government, Israel will look different. With victory at hand and growing confidence, Benjamin Netanyahu will be able to declare the advent of the Second Republic, formed in his image. Render unto Caesar the things that are Caesar’s. No one will be able to claim again that this man hasn’t left his mark on the country and region.

The Second Republic will no longer hide anything taking place in its backyard or try to pretty itself up. It will look exactly like it is. The First Republic was characterized by a mixture of reality and deception: the only democracy in the Middle East, but, at first, one with a military government in Arab areas, then one with a military dictatorship in the occupied territories.

It says it’s the darling of the free world, but it’s also the last colonial regime in the world. It says it’s an esteemed member of the family of nations, but it breaks almost every international law, and it doesn’t annex occupied land so that it can create a false sense of impermanence. It takes pride in this country’s rule of law and Supreme Court, but it has two separate sets of laws based on nationality; it’s Jewish and democratic, but with a built-in contradiction, an unbridgeable one.

All that is over. The next government will be a continuation of the previous one, but stronger, more ultranationalist and racist, less legitimate and democratic. And, it must be admitted, it will be a better reflection of reality.

On Tuesday, voters said a resounding yes to this Israel. The choice wasn’t as hard as it may have seemed: a choice between a government of generals, which would have continued the masquerade to the applause of the world and enlightened Israelis, or another Netanyahu government shaping Israel in its image, without pretense or apologies.

Things will look different. The fire that began flickering during the previous government will spread. The courts, the media, human rights groups and the Arab community will quickly feel it firsthand. Some op-eds in this paper will no longer be approved for publication, by law. It will be forbidden, for example, to criticize Israeli soldiers. Anyone against?

It will be forbidden to support a boycott of Israel. Ben-Gurion Airport will be even more closed to critics of the regime. Nonprofit groups will be outlawed. Arabs will be excluded even more than they are now, on the road to realizing the vision of a Jewish state with Jewish-only legislators. The representation of Arabs in the Knesset might already mirror their representation at the Israel Electric Corporation. And of course, there’s the annexation waiting around the corner.

If there’s one place Benny Gantz has to go immediately, it’s to a town near his home, Kafr Qasem, to bow his head and beg the forgiveness of this country’s Arab citizens, whose representatives he has insulted. Gantz lost his chance to win in part because he distanced himself from this community and humiliated them as if they were lepers, just as Netanyahu did. The revenge of the Arab voters is the punishment we all got.

Maybe it’s not punishment. Maybe the truth is preferable. Let the world see and judge. Let liberal Israelis see and judge, deciding if it’s possible to continue living complacently and in denial. Let them see in Europe and in Ramat Hasharon, in the Democratic Party and in Ramat Aviv, as it all continues.

Maybe the annexation of Area C in the West Bank without giving citizenship to its Arab residents, the legislation of more nation-state laws, the closing of nonprofit groups and the censorship of cultural institutions will achieve what all the years of denial haven’t. Maybe this will finally awaken the opposition that so few have desired over so many years.

Somehow, Haaretz carried no obituary after the election. But the day before, a sweet illusion died. Maybe it’s for the best.