Home > English > NEWS AND ANALYSIS > Gramsci at the Delhi Border: Indian Farmers and the Revolution against (...) 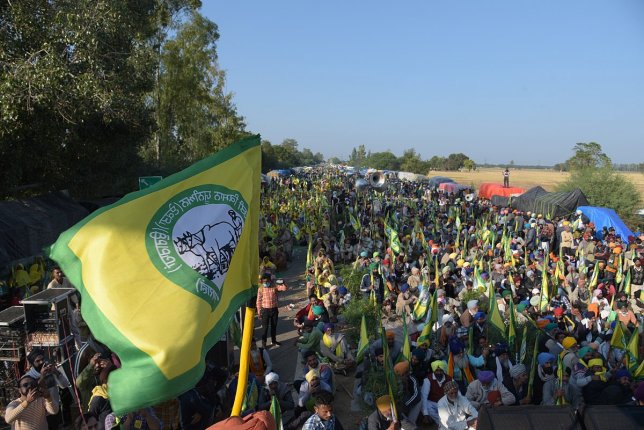 Gramsci at the Delhi Border: Indian Farmers and the Revolution against Inevitability

In October 1917, a young Italian communist named Antonio Gramsci observed the Russian Revolution from afar with a mixture of amazement and confusion. He was thrilled that the Bolsheviks had channeled popular sentiment to seize power from an incompetent provisional government in the middle of a disastrous war. Yet he was also perplexed because of where and how this revolution was taking place. Russia in the early 20th century was a largely poor country, its overwhelmingly rural population engaged in agriculture with only a minuscule urban working class, and far behind in economic development from its rivals in Europe. Hardly anyone could have anticipated it would be the site of a revolutionary upsurge.

To make sense of this situation, Gramsci published an article strikingly titled “The revolution against Capital” on 24 December 1917. What he had in mind was not the economic and social system known as capitalism, but the name of the book written by Karl Marx in 1867. In that text, Marx had set out to explore the discrepant novelty of the bourgeois mode of production as it emerged in Europe. Subtitled A Critique of Political Economy, he wrote against those who portrayed capitalism as the irresistible pinnacle of human achievement. Instead, Marx demonstrated that it was not only exploitative, but also extremely volatile and hopelessly irrational, and therefore impermanent. Rather than an actual history of capitalism, his book details the composition of capital, its internal contradictions and intrinsic instability. The complexity of his explication is matched by the specificity of his object of inquiry.

Since the time of Marx’s writing, however, his ideas were read, debated and taken up in contrary directions. Perhaps the most influential interpretation was to regard Marx as having provided a universal theory of revolutionary progress. According to this perspective, historical change was supposed to be linear, following a predictable path from feudalism to capitalism and then, ultimately, communism. This would take place when the growing tension between productive forces and social relations ignited a class war resulting in the victory of the proletariat. And it would occur first in the most advanced countries such as England or Germany, since that was where workers had achieved the highest level of political consciousness due to the superiority of their economic output. Other less developed countries would have to pass through stages set by these forerunners, gradually building up their own capitalism in order to eventually overthrow it. By the early 20th century, much of official Marxism had become a blueprint of modes and steps.

This ossified theory sharply contradicted the tumultuous reality Gramsci was witnessing in Russia. Here the society was still rural and the economy mostly agricultural, and yet there was no waiting for industrial capitalism to fully develop before embarking on revolution. What is more, the Bolsheviks explicitly claimed to be followers of Marx, yet their actions seemed to contravene the ideology they espoused. It is at this juncture – both conceptual and political – that Gramsci made an extraordinary charge: “This is the revolution against Karl Marx’s Capital” (2000: 33). He meant precisely the teleology that had emerged around the writer and his work. Why, Gramsci asks, should the Russian people “wait for the history of England to be repeated in Russia, for the bourgeoisie to arise, for the class struggle to begin, so that class consciousness may be formed and the final catastrophe of the capitalist world eventually hit them?” (2000: 35). Such stagism was practically unnecessary and theoretically untenable. For Gramsci, history had been altered as much as accelerated by the cataclysms of war and poverty alongside the determined efforts of the revolutionaries. “Events”, he writes, “have exploded the critical schemas determining how the history of Russia would unfold according to the canons of historical materialism” (2000: 33). Revolution in Russia overturned the burden of sequential expectations.

The ongoing farmer and worker protest in India presents an equally confounding moment in global history. Many of its visible aspects differ from what Gramsci saw in Russia. The protest began over the summer of 2020 in the state of Panjab when the right-wing Bharatiya Janata Party (BJP) central government promulgated three laws designed to privatize the agricultural sector. In late November, thousands of protesters pushed through police barricades to march on the capital of New Delhi, erecting makeshift encampments on the outskirts. For six months they have remained at a tense deadlock with the government. During that time, the protest has grown to encompass diverse strands of Indian society, drawing in states such as Haryana, Uttar Pradesh, Rajasthan, and beyond, as well as cutting across caste, religious, gender and class lines. It has also generated unprecedented international solidarity, with massive rallies in dozens of cities across the world. Unlike 1917 Russia, this protest is not led by a single, secretive party, nor is it driven by the objective of seizing political power. Even in the face of severe repression, the protest has eschewed the use of violence. At the moment the key demand remains a full repeal of the three laws.

The most poignant parallel of this protest with Gramsci’s analysis is that it too challenges a deeply entrenched orthodoxy. Rather than the reductive (mis)interpretation of a lone text, though, Indian farmers are confronting a more pervasive set of assumptions and values that structure our world. They fear these laws will lead to their gradual impoverishment and eventual eviction from agriculture altogether. Such concerns are far from idle. In fact, the government and its supporters repeatedly claim that cultivation has become stagnant, and that a greater proportion of people need to be moved into other occupations. Yet instead of addressing the technical problems in agricultural policy, or developing greater local industrial capacity, it is content to allow private corporations to leverage their immense purchasing power to manipulate prices and control the food supply-chain. Market imperatives will then completely dictate cultivation practices, setting off waves of uncertainty, indebtedness and consolidation in the countryside. Far from “reforms”, these laws are little more than a license for corporate monopolizing that will result in rural displacement.

In this sense, the Indian government is pursuing a derivative strategy of accumulation. Much like some early Marxists, it is a warped attempt to follow the trajectory of 16th–18th century England, where peasants were forcibly expelled from the countryside to end up in cities as workers in factories, or as soldiers and settlers in various imperial ventures. This sequence of rural-to-urban transition – of varying duration and degrees of coercion – remains a key feature in the standard narrative of economic development. It has acquired the status of a blueprint because it is assumed to have taken place in almost every large country with an advanced industrial economy. Yet 21st century India scarcely offers the same chimeric possibilities: remunerative manufacturing jobs are pitifully few; there is no scope for colonizing entire continents. A more likely prospect for ex-farmers will be to join the swelling ranks of the urban poor to find whatever haphazard work is available, while a fraction desperately seeks migration abroad.

The farmer’s protest is therefore a revolt against capitalist inevitability. It embodies a critique of the stale logics of deregulation, privatization and dispossession. Why should Indian farmers undergo the same fatalist path as their apparent counterparts not only in early modern England, but in places like contemporary Brazil, South Africa or Indonesia? Ironically, those clamoring to impose market dynamics today mimic the socialist stagism that Gramsci excoriated over a century ago. After all, it is dogmatic to insist that small-scale independent cultivation cannot be made viable, or that public investment and localized regulation cannot become efficient. In Panjab several initiatives are underway for joint cultivation and resource-pooling which involve large numbers of farmers and even landless laborers. These techniques would be both equitable and sustainable, and scalable, if given the right support.

Private enterprise, on the other hand, is neither a guarantor of general prosperity, nor an automatic steward of the environment. Only dogma can conceal the disastrous consequences of the spread of mono-cropping, chemical-dependence and factory-farming across the world. That is because the primary aim of a corporation is to endlessly pursue increasing profit every quarter and year, regardless of the rise in inequality or damage to ecology. Myopia is the mandate, so that alternative concerns are either outright de-valued, or sequestered and relocated through the language of externalities. The decades-long decline of the American small farmer bears witness to this shift in priorities. Yet if free markets were so effective, the US would not maintain subsidies for its large agri-businesses while insisting countries like India end supports and protections for their farmers. Such hypocrisy has been crucial for upholding the disparity between Global North and South.

The fortunes of the struggle at the borders of Delhi thus have implications for the rest of the world. It is not simply a matter of human rights, or the freedom to express dissent and peacefully protest. The power of capital is rarely receptive to spoken truths, however eloquent. Instead, Indian farmers are battling to articulate new kinds of economic rights, to subvert current neoliberal orthodoxy in order to place collective wellbeing at the center of democratic politics. In the spirit rather than letter of Gramsci, they are rejecting one blueprint without necessarily following or even producing another. That alterity might give hope to reconfiguring our troubled global inheritances.

Navyug Gill is at the Department of History, William Paterson University